TV Top Pick #5: Behind the Curve 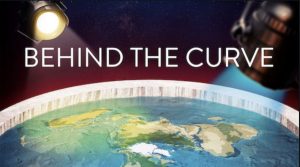 The documentary film, Behind the Curve (2019), can be seen on Netflix.  It introduces us to a growing group of people who believe in a conspiracy suppressing the fact that the earth is not round, but actually flat.  Many people, like me, assume things like the Flat Earth Society were long gone.  But they are not and I found a lot to like in this movie and several important lessons, too.

I hate movies belittling or ridiculing people and this movie doesn’t do that. While the movie is unintentionally hilarious, no one makes fun of these people.  It never plays “gotcha” and has a gentle and human approach to providing thoughtful profiles on key followers of the theory that a vast conspiracy involving government, educators and scientists has duped us all (except them) into the delusion that the earth is a sphere.  It also plays into several ideas that have been on my mind lately (as regular readers may notice), such as last month’s newsletter titled Damn Science Stuff where I discussed related issues.

A motorcycle ride to Cave Creek on Saturday morning with my neighbor found us discussing this film and him explaining something called “Anchoring Bias” to me.  My neighbor is a physician, scientist and recognized leader in the field of childhood epilepsy, and knows a great deal about the rigor required to conduct scientific experiments and steps one needs to take to locate, understand and overcome our inherent biases.  It turns out genuine scientists look at problems arising from experiments very differently from the individuals followed in this film. After obtaining a $20,000, highly precise ring laser gyroscope capable of exceptionally sensitive and minute measurements, they set up an experiment. They knew if the earth was a globe and rotating once every 24 hours, then the gyroscope would have to indicate a 15-degree drift or shift, every hour.  Knowing for a fact the earth was flat, they were confident they could disprove this spherical earth conspiracy once and for all. They set up the device, begin the first 24-hour experiment and find, uh-oh, it shows a 15 degree shift every hour.  However, unlike researchers who adhere to the scientific method*, they disregard this rather obvious proof the earth is indeed round and rotating. Instead, they conclude there must have been something “off” with the device or the way the test was set up.  They keep repeating the experiment, encasing the gyroscope in various metals to block energy from the sky or something, to stop the drift.  But of course, it never did, as the earth is still rotating. But never once was the consideration raised that Earth might indeed be a sphere. They were unwilling to accept the data acquired in their experiments. 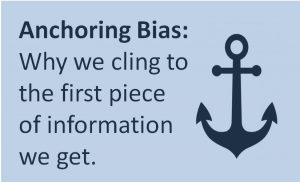 This is anchoring bias and we’re all guilty of it to some degree or another. Anchoring bias is the tendency to give excessive value to your initial thought or data point (the anchor) and to give disproportionately reduced value to subsequent ideas or facts, even if they appear to disprove the anchor thought.  It often results in starting with a conclusion or belief and working backward to find facts that support your view and disregarding data that does not.  Here is an example.  Perhaps you were to say something like, “The crowd at my inauguration was the largest of any presidential inauguration in history, and specifically larger than my predecessor Barak Obama’s inauguration.” Overhead photos of both events clearly show a larger crowd at the 2008 inaugural ceremony than at the one in 2016.  With that data, if you took the approach that the photos are “fake,” you would end up in the same spot as the flat earth believers in this movie.  My example may sound overtly political, but I picked it more because most readers have heard of this and likely have formed some ideas about it.  I believe truth in politics does matter, but likely is more important in matters of science and public health.  The documentary reveals how easily we humans construct our own realities despite what common sense and logic have to say about it.  The rise of social media makes it far easier for people susceptible to conspiracy theories to find communities which support their views.

Since watching “Behind the Curve,” the impacts of anchor bias and non-scientific thinking seems to appear everywhere I look.  One example is my gradual realization of the strong communities which form around shared belief and the way in which being dismissed and trivialized by “unbelievers” and non-members of the community strengthens these communal bonds. When I was a kid, the fundamentalist evangelical church my family belonged to urged its members to witness to others about their faith. Some even organized door-to-door community outreach or standing on corners distributing religious tracts.  I recall this being horribly uncomfortable and embarrassing and wondered why it was done when it clearly didn’t result in us adding even one single individual to our congregation.  But after watching Behind the Curve, I understand.  These forages into the outside world were not expected to recruit anyone, but to make us highly uncomfortable. Thus, when we returned to the group, it was with great relief and appreciation, full of positive feelings for those who believed the same way we did. Communal bonds were pulled tightly around our shared truth that was unknown, misunderstood or belittled by the outside world.

The other example of this is on Facebook or Email when someone forwards/shares a bit of “news” or tasty tidbit appearing to augment their political position, assuming it is true, because it supports what they already believe. When someone occasionally points out that genuine fact checkers have researched this “tidbit” or “news” and found it to be completely manufactured and false, they respond in the same way as the flat earth conspiracy theorists.  In other words, they accuse the fact checkers of being dirty rotten untruthful scoundrels or shills of the opposition, rather than considering they may be wrong.

Winston Churchill was reportedly quoted as saying, “A lie gets half-way around the world before the truth has a chance to get its pants on.” I’ve also heard it said that “Lies run sprints and truth runs marathons,” and my experience on earth seems to bear this out, so perhaps I need not worry. Eventually the truth will win out.  It always does.

* As elaborated in the above mentioned newsletter and defined in the Encyclopedia Britannica as “Scientific method…is the technique used in the construction and testing of a scientific hypothesis.  The process of observing, asking questions, and seeking answers through tests…”