What You Said about What I said 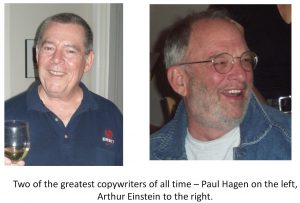 Occasionally feedback on my newsletters and resulting conversations are more informative and meaningful than the original piece.  The “In Praise of Talent” newsletter seems to be one of those. Here is some of the feedback, a day or so after publication of the newsletter with its special nod to photographers. First, I got the following email from my friend, Paul R. Hagan, who spent his career as a professional writer:

Paul wrote: “Enjoyed your article. You must have a great laptop!”

I replied: “Paul, Thank you for the brilliant, succinct and hilarious feedback. You truly are a great writer. I was lucky to meet you when I was young. Learning through you some of the skills necessary for putting words together in just the right way was an inspiration. Being close enough to you to see how much work it was, the time and amount of effort required and what it took out of you to do it helped me understand what it meant to be a professional writer.” 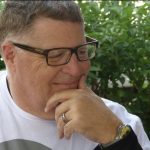 Not all great writing is making things as short as possible, part of the art and special skill of copywriters like my friends Paul Hagen and Arthur Einstein, Arthur of “Plop Plop Fizz Fizz, Oh what a relief it is,” fame.   Like me, my good friend Rich Marin puts only a minimal amount of effort into reducing his written output or length of his prose.  Rich expressed his thoughts about my newsletter and added some significant perspective of his own in his blog post this morning, which you can see here. 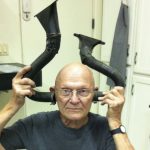 My good friend David Barnett came over yesterday morning and we chatted in my workshop over cups of espresso. We discussed the newsletter and I found myself telling David I believed there was a certain level of achievement or mastery of something one had to attain before you truly began to appreciate the way it is practiced by those who make a profession of it.   As we talked, I came up with four areas where I felt my experience and skills had been refined enough to genuinely appreciate how much better the pros are: photography, motorcycle riding, driving a car fast on a track and writing. During our discussion, a fifth came to mind.  But first, these four:

The fifth area that occurred to me while speaking with David Barnett was the ability to successfully work on cars.  My friends Brett Engel, Wayne Viall, Jim Unsworth and of course, David Barnett come to mind.  Outside of the immensely competent and carefully vetted professionals who contributed to the rebuild of my Lotus Elan like Brian Duffy and Brian Buckland, these four men with day jobs did the greatest amount of work and impressed me so very much.  These four have core similarities:  First, absolute confidence in their ability to figure anything out, repair it or make it better. Second, they are always calm. They never panicked, threw up their hands and wailed, “Oh man, what are we going to do now?”  Lastly, they exuded pure joy as they worked. They were in the zone, doing something they were exceptionally skilled at doing, with friends who recognized and appreciated their talent.  For those of us around the edges of this process, it was a joy to bring them tools, run to the auto parts store, watch them figure things out and scream, clap and yell with them at winning battles along the way, like when the engine first fired to life after re-assembly.

Some of the best times of my life have been in the presence of these special people, those who have mastered one small corner of the world and play in it with such effortless joy.