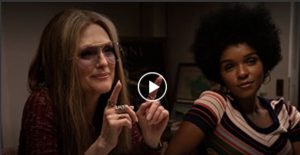 When I was growing up, the name Gloria Steinem was mostly used derisively by many in my family, if she was mentioned at all.  This 2020 documentary movie, shows how childhood experiences influenced this iconic writer, activist, and organizer for women’s rights.  Irrespective of how you feel about her politics and causes, I highly recommend this remarkable directorial achievement. Four actresses play Steinem at various ages and she appears as herself, too.  It’s the best biographical documentary I’ve ever seen.

Before telling you more about this film on Amazon Prime, let me share what it was like for me to meet this movie’s director, Julie Taymor.  Unlike my friend, Rich Marin, who knows so many film celebrities (both those in front and behind the camera), my brushing shoulders with individuals in this profession has been rare, although it’s happened a few times and has always been memorable.

In 2000 I was invited to speak at the TED (Technology, Education, and Design) annual conference in Monterey, CA.  My company was commercializing collaborative filtering software and making waves in the Artificial Intelligence technology circles because of our software’s uncanny ability to predict people’s preferences.  I was invited to TED to explain how it all worked.  Then as now, TED was a big deal and  attracted an exclusive crowd. I will never forget mounting the stage with its amphitheater seating and seeing that my eyes were exactly parallel with people sitting in the sixth row, and I was looking directly into the faces of Jeff Bezos, Walt Mossberg, Mitch Kapor, Bill Gates, and other notables, as they waited to hear what I had to say. I felt more stage fright in front of this assemblage than any other audience I had ever addressed.

Each session of TED was similarly structured.  The TED staff arranged for all speakers in each segment (typically 4-5) to sit together in the front row making it easy for us to take the stage without walking over other people.  We sat in order of how we’d be called to the stage.  I was the second speaker and Taymor, who would speak third, was on my left.  In position well in advance of the session’s start, we had a few minutes to introduce ourselves to each other.  When Julie Taymor told me her name, I had no idea who she was, but we had a nice conversation about the weather, our previous day’s flight, etc.  After I’d given my presentation, I returned to the same row, but at the opposite end, and listened to her talk.  Taymor focused on the challenges she faced in converting one of the best-loved films ever, Disney’s The Lion King, to the stage.  Of course, I was mesmerized by her talk – how she was so intimidated by the task of competing on stage with an animated film, where they “could do anything – if it could be drawn, it could happen.”  Also, how she hit upon the one thing the movie couldn’t do, which was to show things in three dimensions, giving her the idea to move the action off the stage, over and through the audience, creating a live theatre experience that thrilled millions and played on Broadway for 21 years. It went on to become one of the most popular musicals in the world, with 100 million people seeing twenty-five global productions of her play. I also recall being exceptionally happy and relieved that it was not I following her onto the stage. 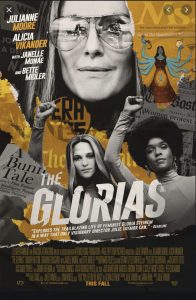 Unsurprisingly, the movie of Gloria Steinem’s life is brilliantly done and I loved it.  It was easy for me to see Taymor’s fingerprints all over it. Not only does it tell a wonderful and inspiring story of a woman who dedicated her life to the causes she believed in, but it does so using four different actresses playing her at different times in her life. Other biographical documentary filmmakers have used multiple actors to play a single individual, but never have I seen a director bring all those actors into the same scene and have them interact with one another. I found it to be a stunning effect, ingenious and creative and so like Taymor.  If your politics are more conservative, you may not be as intrigued by watching her campaign for women’s rights, the ERA, transgender rights, and other causes as some will be. But there’s a good chance you will like it anyway. It is a fascinating study that weaves memories of her youth, her parents, and early life experiences into a believable and memorable human being. As I commented in another film recommendation, be sure to watch this if, by any chance, you have daughters, or if you had a sister… or a mother.  Then you should be sure to watch it.