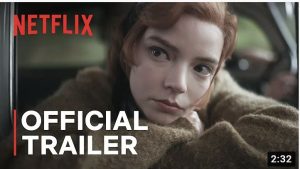 By now you’ll know my top picks aren’t timely. My recommendations are along the lines of “this is something you really should watch and why,” versus trying to keep up with what is hot or trending. So this recommendation to watch The Queen’s Gambit on Netflix, is probably a bit late.  But here is what I found noteworthy and compelling about it.

First, as a guy surrounded by smart, self-reliant, independent, strong-willed women (not the least being a wife, two daughters and two delightfully independent granddaughters), I cheered for this character from the start and blanched at the many ways in our not so distant past, society put women down and marginalized them at every opportunity.  Next, the time period of the series is the late 1960’s, so the cars, fashions, retail store layouts rang so true, it was just captivating to watch.  Anya Taylor-Joy playing Beth Harmon in the lead role puts on an acting master class in just about every scene.  Anyone studying acting to the point they learned how not to blink when the camera is on you, will admire her remarkable control and expressive eyes, most notably when she stares across a chessboard at her opponents.

Like many people, I learned the rules of chess when I was young, but was never able to get very good.  But one needs to know nothing of chess to enjoy this film.  Friends who’ve beat addiction issues have told me the film accurately captures how significant bad judgement can be viewed not only as normal, but as the only logical alternative in certain circumstances.  My good friend Chris Locke wrote: “Of course this movie is great. It’s based on a novel by Walter Tevis, who also wrote three other books made into films: The Hustler, The Color of Money and The Man Who Fell to Earth. I’m heartened, nay positively CHUFFED, that Beth escaped that horror show – and so did Bowie and your current interlocutor.”

The writing and directing is top notch, plainly done by professionals at the very top of their game. The sets show a exceptional eye and sensitivity in choice followed by what had to be budget-busting dedication to perfection. I would not be surprised to find myself watching the series again, just to focus on the sets.  One most capturing me were the hotels, in Las Vegas and Russia, specifically.  The hotel fronts, common areas and rooms were just unerringly correct.  The 1960s home, the New York basement apartment of Benny, the orphanage, the small drug store where she shoplifts Chess magazines and the women’s department store – and many more – hit just the right note.

I learned the term cinematography and what it meant while attempting to figure out why Stanley Kubrick’s 1975 movie, Barry Lyndon, was so good. Steven Meizler is the cinematographer credited for bringing it all together here, the writing, directing, set design, costumes and landscapes, knowing when to show wide shots and then cutting to close-ups that pull you into this incredible story of Harmon’s world.