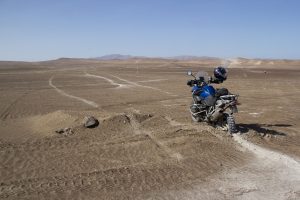 Desert sections of my Dakar trip were a playground. No need for a center stand, just hold the front brake and spin the rear tire until the bike would stay upright.

Late in 2010, my plans to travel to South America for the 2011 Dakar Rally across Argentina and Chile had been finalized.  While I felt mostly ready, I decided one more challenging tune-up test ride was in order to ensure my riding skills were suitably sharp. This is the story of my Dakar preparatory ride  — and crash — along with some important riding lessons learned.

Crown King, Arizona is situated about 50 miles north of Phoenix and 30 miles west of Highway 17.  High in the Bradshaw Mountains (elevation 5,571 feet), it is quite a climb from the valley floor.  Cars and road-oriented vehicles typically exit Hwy 17 at Bumble Bee and then take Hwy 59 through Cleator and on up to Crown King, a one hour drive on wide, well-maintained gravel roads.  However, there is a popular “back way” alternative favored by well-equipped, rock-crawling jeeps, Polaris RZRs, and other off-road vehicles. 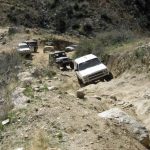 This “back way to Crown King,” although only about 35 miles, takes a good 2-3 hours, as you cross creeks, crawl up rock walls and clamber through some nasty and difficult old mining roads rarely in good repair.  It is not recommended for passenger cars, ever. Jeeps and pure off-road vehicles with skilled drivers love it.  For experienced off-road motorcycle riders it’s possible, but you must be prepared. It is best done on lighter dirt bikes with high clearance and never done alone.

Having recently returned from several days at Jim Hyde’s Rawhyde Adventure training camp in northern California, I was full of confidence. I’d spent 4 days riding one of Hyde’s BMW 1200GS bikes nearly exclusively off-road and often through some unique and diabolical challenges created by Hyde’s training staff. I had performed well, finding myself in the top group of riders in each event. I decided to take my Suzuki 650 V-Strom the backway to Crown King as a final tune-up for the Dakar trip.  While the “Wee-Strom” is not in the same class as the 1200GS, I’d done a good bit of work improving its suspension with the full “After Shocks” suspension upgrade, done for me when the bike was with me in northern California.  I’d also upgraded the brakes and installed steel-braided brake lines.  I felt it could handle it.

The Arizona Trail Riders Association is open to riders of all skill levels.

For my planned ascent, I’d imposed on two skilled riders from the Arizona Trail Riders Association.  We’d met at one of the ATR meetings and done a few easy rides together.  The ATR focuses on the sport of riding motorcycles in the dirt and is open to riders of all ages and skill levels.  In addition to riding off-road, they get involved in trail maintenance and other efforts supporting the environment.  On the day of my ride, I followed my two buddies on my V-Strom as they trailered their dedicated off-road motorcycles to the staging area north of Lake Pleasant. Soon we were off and headed to Crown King.  Everything went pretty well on the way up.  The biggest difficulties were several sections filled with river rocks that significantly slowed us down.

AZ Trail Riders after a lunch at the top.

Rather than stopping in Crown King for a burger, they led me out of town to the top of nearby Towers Mountain, a tall peak with an enclave of huge radio transmission towers.  Near one of the larger tower installations we came across 20 or more off-road motorcycles parked here and there – mostly set in place so they couldn’t roll down the mountain on their own.  We dismounted, parked, and walked behind a building to find a large grill filled with burgers and brats. Riders were standing around who’d made the trip to the top and were now enjoying lunch. These were friends of my two guides and we were greeted like long-lost brothers. We had a delightful lunch with them, told motorcycle lies while some of the group napped in the shade before the long ride home.    As we walked back around the building to where the bikes were parked I found several riders gathered around my V-Strom, scratching their heads.  “Who’s bike is this?” they wanted to know. And the more important question to them, “How the hell did it get up here?” I was pleased these riders recognized the skill set required for getting a bike with substantially more weight and fewer suspension chops than theirs up to this particular landmark.  Basking in the glances from my fellow riders, I momentarily forgot how much more difficult it was going to be getting this heavy bike down from something like this place. As any off-road rider will tell you, in a descent, the bike’s weight is always trying to pull you in a direction in which you typically really do not want to go. 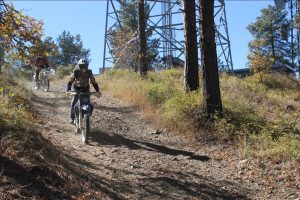 After the antenna visit and lunch, it was all about getting down off this peak.

It took a while, but I managed to get back to Crown King.  From there I elected to take the front way home, which meant wide gravel roads on which normal automobiles have no issues. With my two riding buddies having no objections (they were tired, too) they pulled in behind me and we headed off down the nicely groomed gravely route 59. Now the V-Strom felt great, its extra weight no longer an issue.  As I began to relax from the tense trip down Towers Mountain, I began to let my speed creep up.  Approaching the switchbacks, I pushed the rear wheel out a bit, giving it a bit of throttle and letting the rear end gracefully slide through the turn. Looking in my mirrors, I no longer saw my companions, so I pushed it a little bit harder.  It was a great feeling, moving through each turn – until suddenly, it wasn’t.  Coming in perhaps a bit too fast, I spotted a large rock right in the path I’d assumed I would travel.  Going to the inside (where there was a cliff wall) was not an option and drifting around the outside of the rock would put me not only in the opposite lane of traffic, but have me pointing directly off the road and over a cliff. Before I could make a decision on which of the two very lousy and bad options to take, the bike made the decision for me.  The gravel in the corner had gotten increasingly deeper in the months since the road had last been graded, and my front wheel dug into some very deep and loose gravel, and, with the bike as it was angled, immediately went down, slamming me to the road with it.  I hit on my left side first, with my leg and knee taking the brunt of it, but was then quickly pitched forward onto my head.  Finally, something unlikely to break! I laid there for what seemed like several minutes but was probably less than one when the two riders following me came upon the scene and rushed over to help.  By that time I was beginning to get up but was glad to have help.  My leg, knee, head, and wrist/hand hurt.  I’d been wearing all the proper gear – helmet, gloves, chest and arm protectors. However, I’d cheated on gear to protect my legs and it turns out I was going to pay for that shortcut.

A couple of cars pulled over to offer help and after several minutes of weighing the options, I got back on the bike – which was mostly undamaged – and road it down the mountain and home.  When we got to Highway 74 where my buddies needed to turn off to head back to the launching pad where they’d left their truck and trailer, I was feeling better and promised them I’d have no trouble making it the rest of the way home.  Maggie had been alerted by phone of my crash and immediately upon arriving home she took me to the ER for X-rays and to be checked out.

There were several lessons learned from this crash. The first was how much longer it took for me to heal than it had taken in my youth.  After crashes in my younger days, (yes, I did crash), I was sore for a few days and back in the saddle as if nothing had happened in less than a week. But not this time.  Two weeks after the crash I boarded the plane to Buenos Aires, Argentina with a large bursitis bulge still on my knee, roughly the size of an orange.

The next lesson was a growing appreciation of how riding when fatigued negatively impacts judgment and reaction time.  I’ve ridden long distances on tarmac, the longest in memory was a single day ride from Napa Valley to Sun Valley, Idaho.  On that 972 mile route, I left Napa at 4:30 a.m. and arrived in Sun Valley 16 hours later, after dark.  I was so tired I can’t remember arriving at the small motel, checking in and collapsing on the bed.  That same sort of fatigue arrives much faster when you throw in off-road sections.  Riding over 300 miles of pure off-road terrain has always been my limit, even when younger, and a 150-200 mile off-road day is a better planning range number.  It is not lost on me that the natural relaxation and letting down of my guard after reaching a significant goal (getting to Crown King on a V-Strom) had left a depleted energy tank when it came to getting back home safely.

The third lesson was the importance of having a safety net.  In this case, it was a couple of guys riding behind me, and they were there when I needed them. They got my bike back upright, helped assess the situation, evaluated my fitness for continuing and then followed me for a few miles, watching to make sure I stayed upright and in my lane. 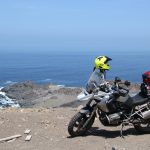 After crossing the amazing Atacama Desert in Chile, the driest place on the planet, the South Pacific Ocean appears to go on forever.

On the two-week South America Dakar ride, which you can read about here, these lessons were never far from my mind, thus serving the desired purpose of a tune-up ride – being physically and mentally prepared.  Of the 14 riders that began the Dakar trip, only half returned on the same bike as we left, and I was one of those. Some abandoned the trip early on, finding it too grueling; others crashed and ended up riding in the truck or finding other ways back to our starting point. I didn’t crash, didn’t wreck my bike and was never hurt.  Being prepared had a good deal to do with that outcome.