A quick story of shared humanity 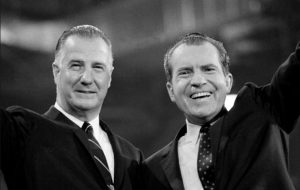 My friend, Rich Marin, posts a blog every day.  I greatly admire his discipline.  Reacting to riots in the aftermath of the George Floyd killing, on Monday he wrote about his brush with riots as a Cornell college student and drew parallels with those going on around his family members.  It reminded me of an incident I’ll never forget at a protest rally in Minneapolis many years ago.

One summer evening, several thousand of us student protesters were storming the Minneapolis Convention Center where Richard Nixon’s vice president, Spiro Agnew, was giving a speech.  We protesters loved to hate Spiro Agnew, although his line about “nattering nabobs of negativism” always impressed me with its alterative poignancy. Riot police had strategically located themselves just inside each open door of the convention center, keeping us from entering the hall where we intended to disrupt Agnew’s speech.  A long billy club was placed perpendicular across the middle of the door opening, blocking passage and was working effectively for the cops. As the crowd pressed forward, the club only became more firmly wedged into place.  Protesters attempting to get over the club were punched or pushed in the face and those attempting to crawl underneath were kicked.  I was near the front of the crowd and was being pushed toward one of the openings.  As I got to the front, I realized the blockage issue and was reluctant to try and go over the top or crawl under.  The crowd behind didn’t understand the holdup and kept the pressure on to move forward and through the door opening.  Although there was a lot of ebb and flow, back and forth, no real forward progress was occurring. 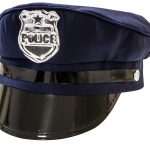 In the middle of all this, a long arm reached over me toward the officer blocking the door directly in front of me.  The individual reaching from behind grabbed the officer’s police cap with its prominent police badge on the front and began handing it back into the crowd behind him. Turning around I could see the police cap, slowly surfing across the crowd, away from the door like a beach ball in the stands at the ball park.  Without his cap, it was clear the young officer wasn’t much older than we were.  As he watched his retreating cap, he called out in a panic to the crowd, “Hey, give that back.  We have to pay for those ourselves!” The jostling slowed a bit, there was a pause, and then the police cap with the badge on its front, slowly turned around and began making its way back toward the door.

The hat ended up in my hands and I turned with it to face the officer.  We looked at each other. There was a problem – both of his hands were firmly grasped on the club across the front of the door, the club that was being used so effectively to keep us from entering the convention center.  He looked at his hat, into my face, and then motioned to the club with his eyes and slight nod of his head.  I understood what he wanted. I got it!  I held his hat in one hand, and took the billy club in my other,and held it in place.  The officer then reached out, took his hat with both hands and put it back on his head.  He saw I was now holding the club in place with both of my hands, and the protestors immediately behind me were pushing backward to help keep the surging crowd at bay.  The officer reached down, grabbed the waistline of his trousers with its heavy tool belt and pulled everything back into place.  Then, as I still held the club, he made a final adjustment in the position of his hat, put both hands back on the club again, took a deep breath, then nodded his head to me as if to say, “Okay, let’s go,” and the crowd began pushing forward again and he went back to keeping anyone from making it past him and getting into the convention center through that door.

I’ll never forget that little vignette, as big a statement about our shared humanity as I’ve ever experienced.  And a big Thank You to Rich Marin for reminding me of it.