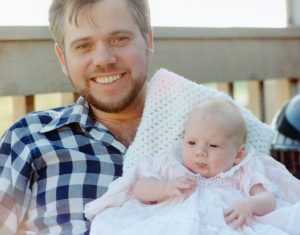 When Ginger was a baby, my stint as Vice President of Marketing at Open Systems came to a close. We needed insurance while I was between jobs, so Maggie went back to work and we agreed I would stay home with Ginny (which was what we called her then). How she went from Ginny to Ginger is a story for another day. 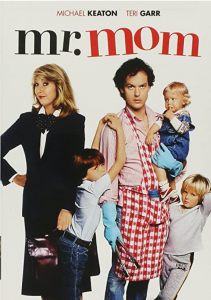 The movie, Mr. Mom, starring Michael Keaton, had recently come out. His character, Jack, is fired from his job and his wife, Caroline (Teri Garr) goes back to work and they switch roles. I thought, “Hell, why not? How hard could taking care of a single child be?” Maggie wasn’t fully on board initially, but then she warmed to the idea as she saw how enthusiastic I was to give it a shot. Soon, she was heading off to work at Control Data Corporation, while I remained at home and took care of Ginny. What an amazing opportunity for a Dad and daughter to bond. She was coming up on birthday number 1; she was perfect without exception and life was great.

Before relating the events that occurred, let’s get two facts clear from the start. The first is how long this lasted: In my mind, and whenever telling of this story, it always seemed to me it was about a year. Looking at the timeline more carefully, I found that no more than 3 months is more likely the right number. Well, it sure seemed a lot longer to me! Second, I was a very involved Dad before this point. We did the pre-natal birthing classes together, I was with Maggie during labor and delivery, and the first to hold baby Larsen after she was born. Once we got Ginny home, I was an equal partner in feeding, bathing, and changing diapers. Well, most of it — I didn’t do laundry or meal preparation. That was about to change.

How to start the process with Maggie gone and Ginny and me at home, alone together? Well, my primary objective was to get organized. This house needed a makeover and I threw myself into the task. The initial focus was Ginny’s closet and her clothes. As a first child, she’d been the recipient of a massive amount of clothes gifts from family members and friends. Add in a big gap in children for our family and we ended up with piles of hand-me-down baby clothes on top of all the new stuff. I emptied every clothes drawer. Her garments were washed and neatly folded and returned to the bureau for safekeeping. Once this was complete, I was loath to see any of her fresh, clean outfits get dirty, so most of the time, Ginny wore a diaper and T-shirt. I found, if I turned the t-shirt inside out before her mother got home, I could get an additional day with a shirt before it needed to be laundered. Thankfully, we were on the disposable diapers kick already.

The next step for this homemaker in creating and customizing his workspace was to organize the kitchen. In one day I removed each single item from each cupboard and drawer, laying out the pieces across the kitchen table, dining room table, and other flat surfaces. Then, after cleaning everything, including the cabinet interiors, all the stuff was put away. The kitchen now conformed to my new, well-studied, and optimized layout. Each plate, fork, bowl, pot, and frying pan was precisely where it should be, although not where Maggie thought they should be, but it was my kitchen now. Part of the problem with this turned out to be an exquisite design. It was simply so good, once everything was put away, I didn’t want dishes and glassware to ever come out again. I began serving meals on paper plates and using plastic ware. “Mess up my kitchen?” Not on your life! 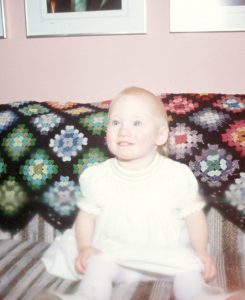 In my defense, my career mirrored this behavior precisely. In my 40’s I finally figured out where in the business world I operated best, and it was as a builder. I loved early-stage companies, deciding on the direction, refining value propositions, constructing a profitable model, and then creating the plan and executing it. I was very good at that and loved doing it. It wasn’t work for me. I once said, “If you want a bridge built, you should hire me. But once it’s built, if you need a toll collector, or someone to paint and maintain the bridge, get someone else.”  Once a business is up and running, the key people are in place, the bugs worked through, the unknowns are all known, I’m ready to move on.

After these key household goals were accomplished, which occurred in only a few days, I turned my attention to my daughter and made sure I was getting her out for regular walks and excursions around the neighborhood. We lived with a lot of other young families and so running into other homemakers was unavoidable. Eventually, I was invited to a “Coffee Klatch” get-together. Wow, what an eye-opener that was.

Having not been here before, I let the 8-10 mothers do most of the talking, which was mostly about their kids progress and done simultaneously. “Lyle is so advanced; his doctor says he’s never seen a boy at 10 months who can crawl as far and fast as he does.” “My precious little Kathie is much more advanced, she was trying to put a dress on one of her dolls, and she’s only 7 months old.” “Little Buster is so ahead of the other boys in his daycare, the teachers told me they’ve never seen a kid drinking from a sippy cup at that age.” I was amazed: every one of their kids was in the top cohort, the upper 10% or in some other way, in the most advanced group ever – longest, heaviest, most hair, earliest tooth, motor skills, etc. Eventually, they noticed I hadn’t chimed in and tried to get me to open up. I was initially reluctant, but realizing you couldn’t have a top end of the scale without a bottom end, I told them in light of what I’d been hearing, there was no doubt in my mind, Ginny was clearly retarded. I went on to say, “I think she’s in the bottom third of everything they measure kids on. That said, I do think she giggles well. She really is very good at giggling – oh, and laughing, too. Damn, she can laugh extremely well. I was thinking she might be further along in laughing than some other kids and while I think it may be her strongest capability at this point, I have to admit, it seems pretty much the same as other kids her age.”  Hard to believe, but I never got invited back to another Coffee Klatch event. 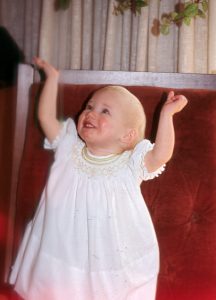 Did Daddy and Ginny have fun?

But those mothers took their revenge. They began squealing on me to Maggie. They would snitch and inform on me about every little infraction as if it was catastrophically horrible. “He was out jogging, and he had Ginny on his shoulders, she was bouncing up and down, I swear to God he was about to drop her.” Or, “He was pulling her in the wagon and she wasn’t wearing a jacket, scarf, mittens or hat. She was so cold her lips were turning blue.” Fortunately for me, while Ginger was learning to speak, she wasn’t yet speaking in sentences or even making much sense when she did speak. Don’t get me wrong, she was delighted to try and say new words, but typically did not appear to know what they meant. As a result, she became the star, go-to witness in my defense and I called her to the stand whenever needed. When confronted by Maggie with the latest horrifying tale of something unfitting I’d done with our daughter, I’d look at Ginny and ask, “Did Daddy and Ginny have fun?” and I’d throw my hands up in the air and make a funny face. Ginny never failed to throw her hands in the air too, and giggle and laugh. This nearly always got me off the hook. We made a great team and none of the charges ever stuck. 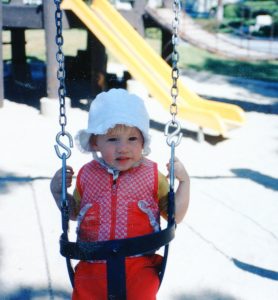 But what to do with Ginny in the process of the book moving? No worries, I set her up in her bouncy chair so she could sit, play, and watch me as I made the move. After a few trips, the number of trips I was going to need to make began to dawn on me. So, with each new load, I began expanding the number of books I would take, squeezing my arms together more and more tightly. Soon I’d exhausted the lower shelves on the far left bookcase. Bringing in a 3-foot step stool from the garage, I could reach the top shelves. Putting my hands on either side of a pretty good length of books I slowly moved them off the top shelf. As soon as I turned around on the top step of the stool, the books collapsed in the middle and fell to the floor with a loud crash. Even before they landed, I loudly yelled “Oh Shit!” Ginger looked up at me, looked down at the mess scattered across the floor, and as clear as a bell, said, “Oh Shit, oh Shit, oh shit.”

God was I in trouble. Now what? I picked up the fallen books and put them in the other room. Standing in the doorway of the office, I looked at the shelf from where the accident had occurred. Sensing Ginny’s eyes on me, I got back up on the ladder, feigned grabbing another full armful, turned back to her, and said, “Oh Shoot! Shoot, Shoot, shoot!” enunciating perfectly, to make sure there was no mistake in understanding, and slowly turning my head from side to side in a look of dismay. Looking up at me with a twinkle in her eye from her bouncy chair, as clear as a bell she said, “Shit, shit, shit. Oh, Shit!” 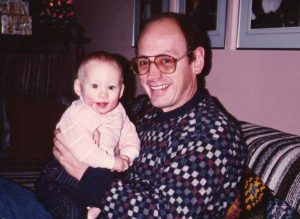 Ginger and Uncle John Gravley, at about the time this story takes place.

I’m not sure how many days it was before I got nailed, but it wasn’t many. Maggie was putting something away in the kitchen and she bumped a cup from the counter onto the floor. Ginny, sitting in her high chair, looked at her and triumphantly said, “Oh Shit! Oh shit, oh shit.” I was out on the deck, but heard Maggie call, “Steve, you better get in here, right now.” Yeah, I was toast. No witness to my defense this time. I told her the whole story and she reluctantly forgave me, but not before reminding me how impressionable young brains can be.

I loved my 3 months or so playing Mr. Mom and believe Ginny and I did bond in some special ways. Caring for her was an important task and I always took it seriously. There was never a point I put her in any real danger, although I’m sure I did things most first-time mothers might not do. But mostly I remember the two of us laughing a lot and having fun. 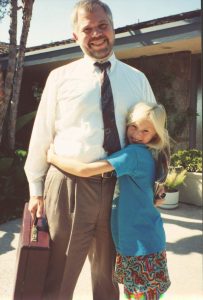 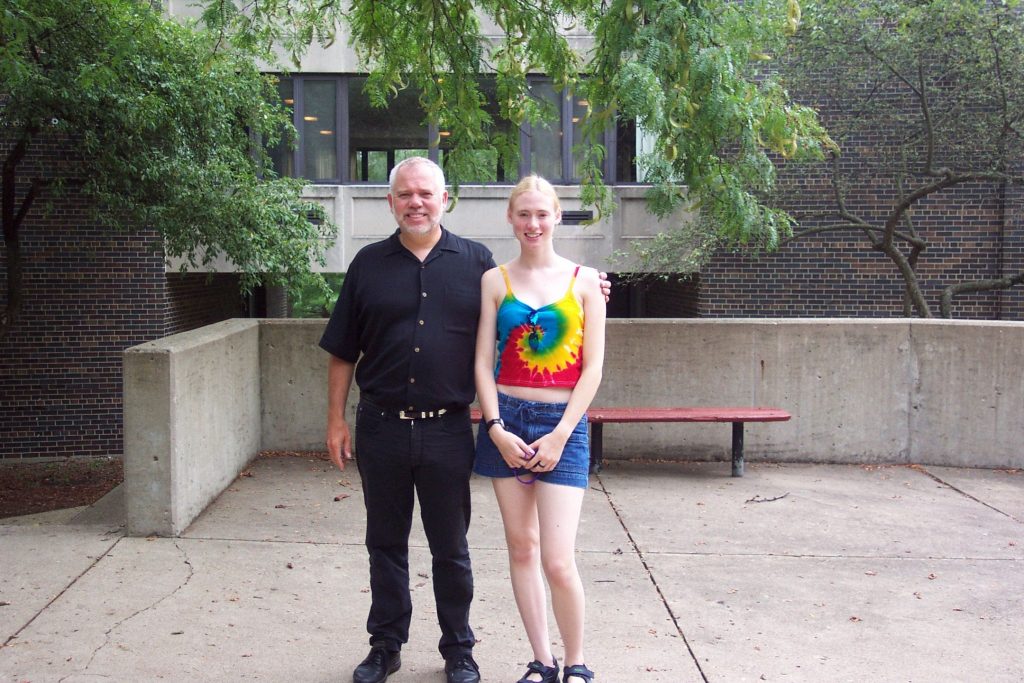 Dad and Ginger, dropping her off at Kenyon College. One of these two could not stop crying.

Here’s an addendum to this email/blog post.  Ginger found it humorous and a few days after it was published, she sent me the following cartoon that made her think of this.  I thought it was great! 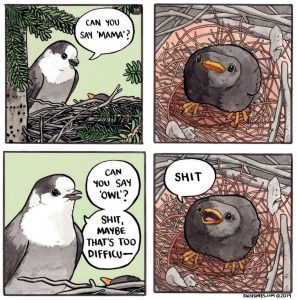