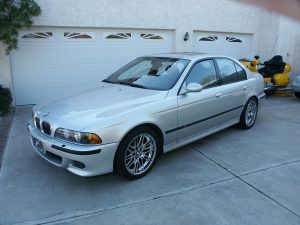 Early in 2000, stories circulated in the automobile universe about an extraordinary new car from BMW called the M5. Journalists and car nuts nicknamed it “the Beast.”  At 400 HP and 398 lbs. of torque, it was a rocket ship. With scary 0-60 times and a top speed of 180 mph (with the limiter removed), it was the ultimate wolf in sheep’s clothing, as its outer skin was a generic-looking 4-door sedan.  Think about it:  here is a “family car” faster from zero to 60 than a Corvette, quicker in a quarter-mile than an Aston Martin DB7, better than a Ferrari F355 Spider in cornering (measured on a 300’ skidpad) and faster through the slalom than a Lamborghini Diablo.   Throw in a manual gearbox and brilliant handling and what’s not to love?  I had to have one.

In my friend Philip Richter’s most recent blog post, he wrote about this car, known by BMW and car people as the E39.  You can read Philip’s report on this amazing car, here.   In addition to Turtle Garage, Philip also writes for the king of all collector car publications, Keith Martin’s Sports Car Market Magazine.  If you like reading about cars, I recommend you subscribe to Philip’s Turtle Garage and Sports Car Market.

Back in 2000, I rushed to my local BMW dealer (Motorwerks BMW in Bloomington, MN) to place my order.  Soon I’d “configured” a new M5, chose its color (Titanium Silver), interior (red leather), and a host of options.  I went whole hog on the extras and recall the car pricing out around $80K, a staggering amount of money in 2000. Adjusted for inflation, $80k is roughly $122k in 2020 dollars. But as it was 2000 and the pinnacle of the dot.com boom and I was on the founding team of a successful Internet company, what could go wrong?  After I’d signed the papers and paid my deposit, I learned there was a 14-month wait for the car.  Huh? This was something I’d never experienced.  I was livid.  I threatened to cancel the deal but learned this would only move me further down the list for one of these most-coveted icons.

Okay, okay, I finally agreed.  “But what am I going to drive between now and then?” I pitifully wailed. The new car manager (Alan  Krutsch) introduced me to his used-car guy (Paul Kline), who put me together with Troy Chamberlain, and we began to talk.  Now here was an interesting young man.  He was thrilled to find I owned a Lotus Elan, which he had raced.  It turned out Troy was a talented and experienced race car driver currently piloting a BMW set up entirely for racing which he campaigned, with sponsors, at tracks throughout the Midwest.  We spent hours talking about different cars and how they handled and the best ones for the road.

My final question to him was: “What is the best handling, most amazing streetcar you’ve ever driven?” He replied, “Easy question. That would be an Acura NSX.”  It turns out he’d owned one for a year when he’d lived in Europe, and both he and his wife had loved it.  An NSX had parked near my office building when I worked in New York, so I was familiar with the spectacular look of the car, if not its performance.  But it sure sounded good.  As Troy described the remarkable attributes of the NSX, I was soon hooked.  Because the NSX was rather rare, they had none on the lot.  But as promised by the new car guy, they’d find me a car at auction, which I would purchase from them and they’d take it back in trade for my BMW M5 when it arrived, with zero markup, provided I kept the car in good condition.  No charge for miles added.

Before my next visit to the dealer, I’d done my research and knew the precise NSX I wanted: a red car, black interior with a removable Targa top (NSX-T).  It had to be a manual transmission, low miles, and a 1995 model year or newer, as Acura had added a Targa top in ’95 as well as upgrading the engine to 295 HP and 298 lbs. feet of torque. With that firmed up, I began the wait.  The first prospective NSX popping up a couple of weeks later wasn’t perfect, and after some coaching from the used car manager and Troy, we decided not to bid on that car.  Two weeks after, I got a breathless long-distance call from Paul Kline. He was at an auction and had seen and inspected the perfect car.  It met everything on my wish list, but he said, given it had the carbon fiber interior kit and CompTech factory exhaust upgrades, it would likely be bid up over what we’d agreed I was willing to pay.  Would I go higher? Then he said, “Tell you what, I’m so convinced you’ll love this car, if you don’t want it for what I buy it for, I’ll buy it.”  So, I told him to go ahead and I increased my maximum bid amount by $5,000. 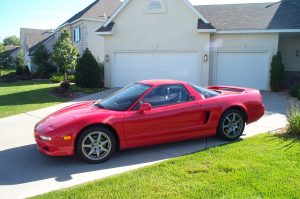 A few days later I was at my BMW dealership, looking at a freshly detailed 1995 red Acura NSX-T, VIN: JH4NA1186ST000274.  It was gorgeous.  I couldn’t believe it.  And then I drove it.  Sublime! It handled like my Lotus Elan, but it was much faster – and it had air conditioning, a working radio, cruise control, and more creature comforts.  Put the windows up, it was as quiet as, well, a Honda.  Roll them down, electric windows of course, and the exhaust note of the engine was symphonic. I was in love.

For my 50th birthday party, Maggie rented a paddle-wheel boat for a night and invited a hundred or so of our closest friends.  Parked outside the boarding plank was my red NSX with a huge ribbon and bow around it.  While I’d had the car for a few weeks, few of my friends had seen it yet. We pulled it over on them that Maggie had got it for me as a birthday gift.  Someday I’ll tell you the story of that party.

Fourteen months flew by.  I loved the NSX.  Maggie loved it.  Ginger even learned how to drive a stick shift in the NSX, after failing to learn on our Toyota 4Runner. Like many girls her age, Ginger was oblivious to car brands and had no idea what was in our garage.  One day I dropped her off at her high school in the red NSX vs. the Toyota daily driver.  When I got home from work that night, she started asking me some very uncharacteristic questions: “Dad, what kind of car is the red car? How many “horsepowers’s” does it have? How fast will it go?”  It turns out some of the boys at her school had seen her being dropped off and she had now piqued their interest.

Then BMW called to say my new M5 was in and ready to be picked up.  At the dealership the next day, I spent an hour or so on paperwork, got briefed on the new car, which was very cool, and gave them the keys to the NSX.

Then I drove the new M5 home.  It was less than a dozen miles.  The first drive in the M5 was amazing, even though it was in its break-in period.  I came into the kitchen, tossed the keys on the counter, and said to Maggie, “I think I may have just made a big mistake.”

Don’t get me wrong, the M5 was an awesomely wonderful car.  It would hold four adults.  It was blindingly fast. It was as solid as a tank.  You could cruise at 80-90 mph and it felt no more than 40 mph.  The sound system was incredible.  But it scared Maggie to death. Ultimately, she refused to drive it. “It’s frightening; it goes 40 mph in neutral,” she said. “I just look somewhere and before I know it, the car is there.”   And then there was the gas mileage.  It averaged between 10 and 14 miles per gallon, no matter how you drove it. That pissed me off.  And it burned a quart of oil every few thousand miles.  Now, I could tolerate that on my Elan or other older cars, but weren’t new cars not supposed to do that?  We found ourselves driving it less and less.

And this whole “wolf in sheep’s clothing” concept echoing in the head of every car nut turned out not to be as compelling as I thought.  Sure, you can pull up at a stoplight next to a new Corvette or some other hot car, and the M5 would just smoke them.  But who cares? Who were these people in the other car and did they even know you were racing with them?  It turns out pulling up to a stoplight with the NSX and have other drivers drool over it, was just as satisfying.

Then we moved to Arizona.  The M5 made the trip in the back of a moving van but made even less sense for me in Arizona.  I no longer needed a backseat.  Arizona had not improved the M5’s gas mileage. The NSX siren songs began.  It occurred to me one nice January day in Arizona in 2003 that Acura dealerships in the northern part of the country might have an unsold NSX.  How many people there were walking into Acura dealerships asking if snow chains could be fitted on an NSX?  So I started calling, and sure enough, in Libertyville, Illinois, I found a dealership with a brand new NSX. It was last year’s model (a 2002), so they were willing to deal.  And it was yellow.  My knees went weak. 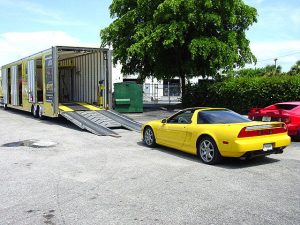 My new yellow NSX arriving in AZ from Illinois, February 2004

Explaining I had a slightly used BMW M5 with just 9,000 miles on it, I suggested to Brian Cole in Libertyville that we should trade them even-up.  I reasoned the M5 was something that could be driven (and sold) in winter.  It took several days of haggling and ultimately I needed to pay about $10K, but we agreed to trade cars.  I shipped them the M5 and they shipped me the NSX.  I still have this 2002 NSX.  It has over 40,000 very happy miles on it, and looks new and runs perfectly.  Maggie loves driving it, although finds she is occasionally followed by young men driving Asian tuner cars.

As Philip explains in his article, the BMW M5 was an iconic car.  On the one hand, it was the end of an era, given its manual transmission, an actual key to start the car, and a real dipstick.  While not as rare as an NSX, almost 10,000 M5’s were produced; it remains a truly wonderful car to drive and a high-water mark in modern BMW automotive history.  But would I trade an NSX for one? Not me.  Never again!

You can read more about my car collection and see more pictures here.

When the M5 came out, I captured some of what the press said about it: 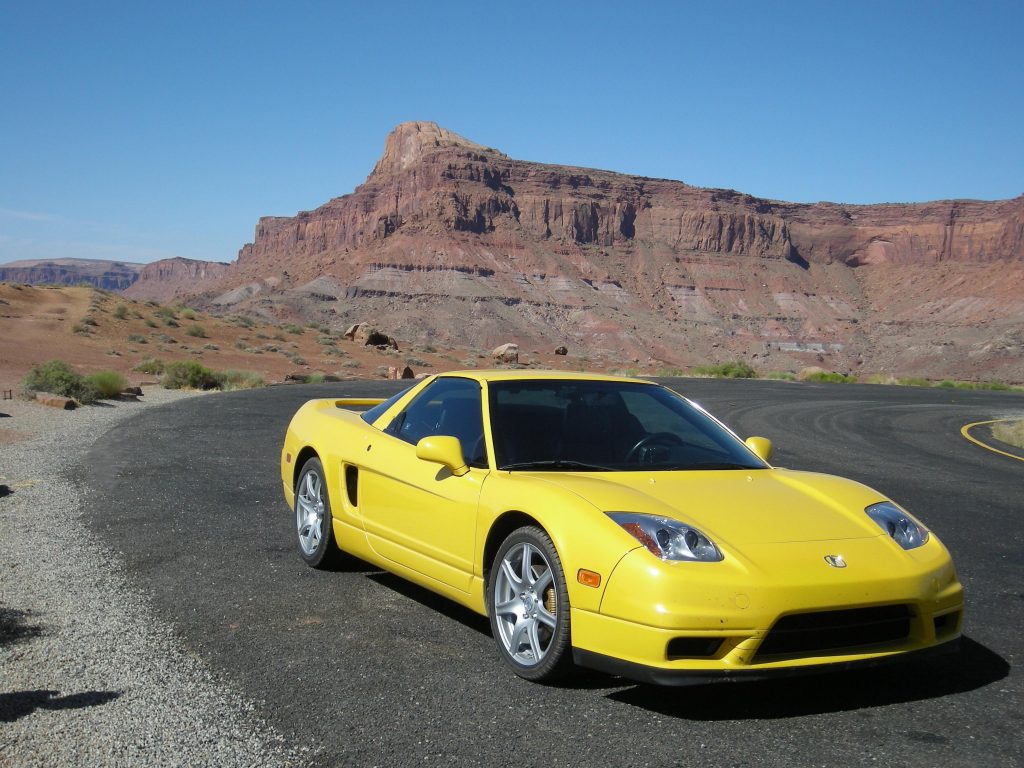