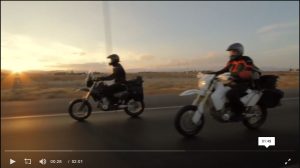 On a Zoom call with my motorcycle riding buddies earlier this week, my friend Ed Deutsch recommended the documentary, “Ten Thousand Miles to Rio” on Amazon Prime.  It was a lot of fun and reminded me of how many times I’d headed out unprepared on a motorcycle adventure.  Granted, I never sat around an apartment in Las Vegas and said, “Hey, I’ve got an idea, why don’t we buy a couple of Suzuki DRZ400’s and ride to the border, then through Mexico and South America to Brazil for the annual Carnaval celebration?  I’ve heard it’s a great party!  We’ll go on the Internet in each town and find places to stay on ‘couch surfers.com,’ maybe meet some girls and drink beer – how hard could it be?”  You cannot watch this film without thinking, “Oh to be young and dumb, again!” I will say, one of my riding colleagues has actually done things like this and on more than one occasion. I don’t wish to mention Dr. Gregory Frazier’s name, as it may embarrass him, but he knows exactly who he is.

I had to call Ed Friday night as I’d forgotten the name of the movie.  On our call he told me about another biker flick he’d just finished watching called, “Why We Ride,” also on Amazon Prime.  It seem familiar and I thought I’d watched it back when it came out, but apparently I’d missed it as the whole thing was new to me. What a terrific movie/documentary on what it is that compels us to ride motorcycles (those that do).  There is a link to the trailer for the movie below.  The entire time watching it I kept thinking about the guys in the Thursday Lunch group and my American Flyers Motorcycle Club with a good deal of affection – seriously, all of them.  “Why we Ride” captures not only why I get on a motorcycle as frequently as I do, but also why I miss all of my riding friends.  I think you will like it. 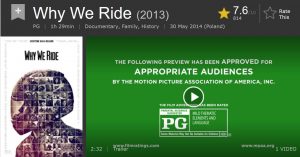 Not to belabor my recommendations, but I loved both these movies. However, “Why We Ride” features many motorcycling icons, some being my heroes, and a few I’ve had the pleasure of meeting over the years.

If you get the chance to watch either of these, let me know what you think!