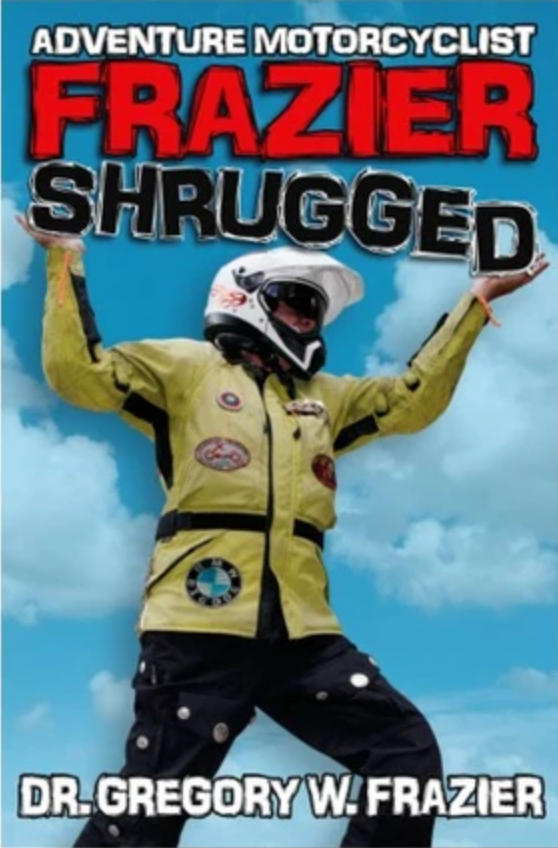 I’ve just finished Dr. Gregory W. Frazier’s latest book, Adventure Motorcyclist: Frazier Shrugged. (Order from Sound Rider.) The book is a collection of Frazier’s columns, many from the pages of CityBike Magazine, where Frazier was a long-term contributor, before the publication folded its tent in 2019. Although it’s likely they appeared in many others as well. Frazier is a prolific writer and regular contributor to a variety of domestic and international motorcycle magazines. Like me he’s written for BACKROADS, Motorcycle Consumer News and RoadRUNNER, but adds Motorcycle-USA.com, American Motorcyclist and Road Bike here in the States to his domestic list. His work also appears in motorcycle-oriented publications in Germany, New Zealand, Great Britian, Russia and Japan. We share reputations for solid product evaluations and compelling stories of our motorcycle journeys. We’ve both raced motorcycles, although few records exist of my middle-of-the-pack finishes, Frazier has won races on BMW and Indian Motorcycles and competed successfully on Hondas and Yamahas as well.

That is where the similarities end. When it comes to riding, Frazier is on the other end of the scale. He’s the only guy I know who has circumnavigated the globe by motorcycle six times. He’s been shot at, jailed, bitten by snakes and run over by Pamplona bulls. He’s broken down or had flat tires in more countries than I’ve ridden in. His over 1,000,000 miles on a motorcycle have taken him to Alaska, Ushuaia, Argentina, North Cape, Norway, Cape Agulhas, South Africa and New Zealand, among many, many others.

Thorough the riding stories in Frazier Shrugged, he expresses thinly veiled disgust with the erosion and broadening of the word “adventure.” I understand. He’s built a life around a series of genuine motorcycling adventures. He’s personally navigated the globe on a variety of motorcycles half a dozen times, most often alone. Having the term “adventure” applied to low-risk guided motorcycle tours lead by a GPS equipped tour professional, followed by a cradle of riders with a sweep van filled with tools and luggage going from one 5-star hotel to another, manages to get his ire up.  When the term adventure is further extended to a host of motorcycles and accessories, it infuriates him even more. I get it. The dictionary definition of Adventure includes terms like risk, hazards, exciting action and uncertain outcomes. However, tolerance for risk and ambiguity varies from person to person.

Frazier’s perspective on his fellow riders reminded me of an incident a few years back in Camden, Maine. Overhearing a conversation between two obvious Maine residents, I could barely hold back a chuckle. The first one asked the other, “Where ya from?” and to the reply of “Portland,” he huffed back, “Portland! You might as well live in Massachusetts!” Now, to fully appreciate that, you’d need to add a deep Maine accent  — “North Haven” becoming “Nahwth Haven” and “summertime” heard as “summahtime.” Running into the Portland resident later I asked if she’d been offended. She said, “Oh no. That’s pretty common. Anyone living in Maine who lives further south from where you personally reside is considered fair game to the criticism that where you live might as well be ‘a suburb of Massachusetts.’ In their estimation, genuine and true Maine residents only live right where they do – or further north and east.”

This same judgement is often expressed in automobile drivers: a growing frustration and mutterings of “what’s wrong with this idiot,” when following someone going slower than they wish to proceed. Of course, a few minutes later, commenting “Look at that crazy idiot,” when someone speeds by much faster than they are moving. In other words: “If you’re going slower than me, you’re an idiot and if you go faster than me, you’re an idiot.” 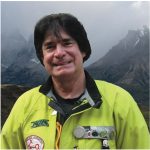 It’s difficult for me to criticize Frazier. We’ve shared editorial homes over the years and met a few times. I like him. When it comes to global riding, with minimal resources and support, he’s absolutely the genuine article with his million plus miles to nearly every country in the world prove that. My riding “adventures” are far lower on the risk and ambiguity scale than Frazier’s – although higher than many of those with whom I typically ride. I’ve ridden in Argentina, Australia, Brazil, Bosnia and Herzegovina, Canada (does that count?), Croatia, Chile, Greece, Italy, Mexico, New Zealand, South America and Turkey and some more than once. My rides have been a mixture of solo efforts and guided tours and I’ve loved both. Readers of this newsletter can find copies of some of my stores about these trips here.

Frazier’s animosity for those lower than him on the scale of risk, danger and ambiguity is not a feeling I share. To me the point is this – no matter where you are on this competency/experience scale, there is someone higher, who could, if they wished, make snide and derisive comments about your experiences and accomplishments: “What, you slept in a flea-bag motel with a real roof which was mostly water tight? You wimp! We camped 100% of the time, even in the snow!” Or, “What, you had a 650 cc bike? We did all our trips on nothing bigger than 250 cc’s. How can you possibly consider any experience on a 650 cc bike an ‘Adventure? What kind of fraud are you?’”

Frazier isn’t a tourist, he’s a traveler. Like my cousin, John Gravley, who spent several years of his life traveling the globe, Frazier’s travels are not a holiday. He takes whatever time is needed to get from A to B, and once there, decides what point C will be and when he’ll head in that direction. He’s not there to see the sights, at least not the ones in a guidebook. He eats what locals eat, although happy to see a McDonald’s. Frazier makes an effort to learn at least some of the language of whatever country he’s passing through and, over the years, has been able to communicate capably in many of them. This is a very different approach than a typical ten-day riding vacation where you are essentially a tourist. But what he perhaps does best is capture the feelings of those experiences and pass them on to readers. As an editor of mine once told me, “Your job is to never say, ‘Well, I guess you had to be there.’  Your job is to take them there.” In this, Frazier succeeds, albeit with a shorthand sometimes only other travelers and adventure riders will hear.  But as my Australian friends say, “Good on ya!”

While I don’t agree with his penchant for dissing the foibles, lack of planning and unrealistic expectations of other motorcyclists, I must admit some of his stories are pretty funny. Readers who enjoyed his columns will remember why they liked them. If you have ever thought about hopping on the back of a motorcycle and taking a really, really long multi-month ride, you owe it to yourself to read not just this book, but some of his other books as well. You can find several on Amazon.com, although I prefer to order them from Sound Rider, feeling he likely gets a bigger cut and these online retailers need all the support they can get.  My favorite Frazier books are:

2 Responses to Riders! You really should read Frazier’s Book