Article on the Design of the 2015 Indian Scout 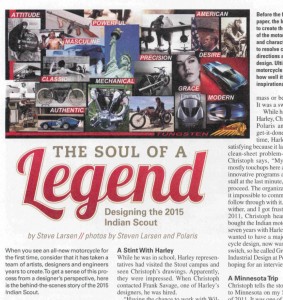 Soul of a Legend – MCN-March2015
The March 2015 issue of Motorcycle Consumer News has my story about the design of the new Indian Scout. The original Scout from the 1920’s was such a classic and iconic machine that it seemed to me an almost superhuman task to get the design right in a modern bike that could honorably wear the Scout name. My first thought on seeing the bike was “Wow, they really nailed it!” I was intrigued by what it must have taken to get it right. I traveled to Minneapolis after the Sturgis launch and interviewed Rich Christoph for several hours, and we had several subsequent phone calls and email exchanges before my nearly 8,000 word article was finished. I managed to get a behind-the-scenes look at the 2 1/2 year project to bring the 2015 Scout to life. You can read the article by clicking on the link above. Fortunately for you, MCN editor Dave Searle cut it down to 4,000 words.