Yeah, but do you have a finger from a dead pirate? 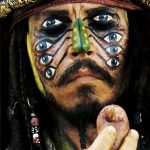 Our home in Pasadena had become the “go to” spot for Thanksgiving (and occasionally Christmas) for Maggie’s sister and the Stickney family.  We loved having Diana, Joe and their children around, and Ginger was in heaven with all her Arizona cousins on her turf.

I’m not sure where the idea came from, but it didn’t percolate in my brain too long, before I knew I had to attempt to pull it off.  I was already pretty high up on the “crazy but fun uncle” scale when it came to my nephews, Robert and Isaac and to a lesser degree, Andrew as he was still pretty young with Maria just thinking I was weird.  They’d seen all my magic tricks and played with the remote control truck I’d purchased.  We’d gone hiking with the wagon and played every trick you could think of on the dog, a sweet female Rottweiler named Heidi, who just adored children.  In 1990, Robert was 10, Maria was 8, Ginger 6 and Isaac was 4. Perfect ages for what I had in mind.

At the dinner table on Thanksgiving Day, I began sowing the seeds.  “Did you know?” I asked, “One of my great uncles was a pirate?”  I elaborated on my pirate uncle’s exploits, telling them about buried treasure and walking the plank. The adults’ eyes rolled back in their heads, but they played along and didn’t call me out, although they no doubt suspected I was up to something.  The kids had lots of questions about pirate life and I was happy to spontaneously oblige, making up answers to their questions.  When dessert was served, I slowly and gently set the hook. “You know, my uncle gave my dad a memento of his days on the high seas.  It’s a finger from a dead pirate.  My dad gave it to me.  I don’t know where it is now, maybe in the garage, but it’s a real sight to behold, a genuine, actual finger from a dead pirate.”  Then I said no more. 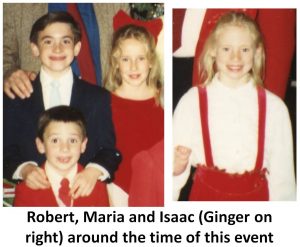 Soon Robert asked, “Uncle Steve, do you think you could find the dead finger from the pirate and show it to us?”  All the others chimed in, “Yes, yes, could you find it, please, PLEASE, Uncle Steve?”  I said no, I didn’t think so.  It had been many years since I’d last seen it, so I was pretty sure it was lost.  And I let it go.

When our mid-day Thanksgiving dinner finished, the children went back to playing, but I could hear them talking about the dead pirate finger.  Fifteen minutes wouldn’t go by before one of them would bring it up again and soon they were all after me, “Uncle Steve, can you at least go and look for the finger?”

At this point in the story, I need to bring you into a bit of the preparation.  The day before, I’d emptied out an old sliding box of matches and filled it with discolored cotton balls I’d dirtied up using brown shoe polish.  Then I’d cut a finger-sized hole in the bottom of the box, so that when I put my finger in the bottom of the box and held it with that hand, I could slowly slide the lid of the match box back using my other hand, revealing my finger, laying on top of the dirty cotton balls.   Well, of course, my finger wouldn’t do as it was, so just before agreeing to go and look for the pirate finger, I went in the bathroom and poured iodine onto the middle finger of my right hand.  Iodine rather convincingly turns a healthy finger yellow, brown and dead-looking.

Carefully keeping my now gross-looking finger out of sight, I went rummaging in the garage for this lost box containing the finger.  The kids were all crowded around me, as I opened drawer after drawer but finding nothing.  I kept up a steady dialog of “Well, I’ve not seen that thing in years, I’m almost certain it’s lost.”  They kept saying, “Keep looking, Uncle Steve, it has to be here somewhere!”

Finally, I opened the bottom drawer of my ancient tool bench where I’d hidden the old matchbox.  “Ah, there it is,” I said, pointing to it.  They all recoiled in horror.  I suspect they believed we wouldn’t actually find it.  I pointed at it and said, “Who wants to pick it up?”  They all began to scream, yell and jump around in place, saying “No, no, you pick it up, Uncle Steve.  Show us, you show us the finger!”  So, I reached down into the drawer, carefully using my body to cover inserting my groady-looking finger covered in dried iodine into the box. When I turned around, the box was in my right hand and I was gripping the sides with my left. “Well, I hope it’s still in here,” I said as I began extending the box towards them.  The young ones hung back, but Robert and Ginger leaned forward toward the box, but not too close.

As I slid the cover off the box, there was the horrible looking finger.  Truth be told, it looked gross.  They all recoiled and held back at first, but then slowly edged closer for a better view.  I showed it around, let them all get a good look.  They gasped and screeched with simultaneous delight and revulsion.  Finally I said to Robert, “Do you want to touch it?”  At first he screamed “No, no, no….” but then when his little brother Isaac said, “I’ll touch it,” Robert decided he would do it first.  Ginger and Maria were horrified.  They wanted nothing to do with this dead pirate’s finger, but they couldn’t stop staring at it.  I held the box out to Robert as the others gathered close around and behind him.  He slowly moved forward, looked at it, and then very carefully began to reach out with his arm and hand, one quivering finger tentatively extended to make contact with the dead pirate finger.  When Robert’s finger was just an inch from the finger in the box and every kid’s eyes were glued to what was happening, I quickly raised my finger up toward Robert’s raised finger – the dead finger had come alive!

You can’t believe what happened next.  Robert perfectly mimicked the way the cartoon coyote would jump up, turn around in mid-air and then frantically begin spinning his feet, while not going anywhere.  Finally Robert’s legs got traction and he shot out of the garage, screaming at the top of his lungs, his brother, sister and cousin racing behind him.  I’ve never seen such a group of panicked children run so fast.  They shot out our long driveway toward the street and didn’t stop until they were nearly out of sight of the house.  The rest of the adults came out of the house to see what the commotion was all about and found me collapsed in laughter on the front steps with the kids half-way down the driveway, white as sheets.

Creating experiences which instill memory treasures in the minds of my nieces, nephews, kids and grand-kids will always be one of my favorite things.  I hope my nephews remember this little trick and use it appropriately when their own sons, daughters, nieces and nephews are old enough for it.  It sure was fun for me. 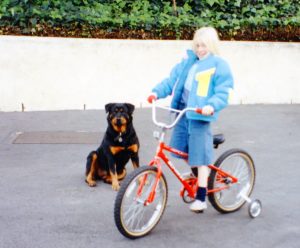 Ginger and Heidi in the driveway where this all happened.