Wildlife out to get you 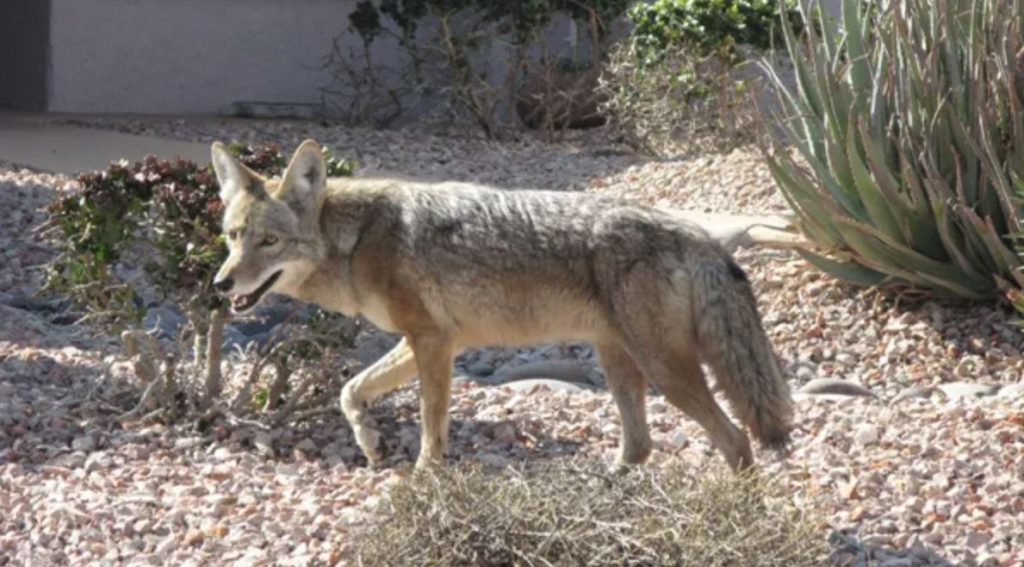 My good friend, Rich Marin, wrote recently in his daily newsletter about concerns he and his neighbors have regarding the wildlife with which they co-exist in the canyons around Escondido, CA.  His fear centers most on packs of coyotes attacking pets, but includes mountain lions, rattlesnakes, deer, and gophers.

Our move to the southwest happened about ten years before Rich and Kim’s, so it may be I’m further along in judging actual threat levels versus perceived threats. The following is written to help put fear and risks into perspective and also to provide some ideas on courses of action to reduce risks.

Coyotes:  People are rarely bitten by cornered coyotes, even more rarely, rabid coyotes. There are two recorded incidences in the United States and Canada of humans being killed by coyotes — one a child in Southern California in the 1980s and the other a 19-year old woman in Nova Scotia in 2009. With domestic dog attacks averaging 59,000 per year, it might make sense to shift focus to where actual threats are most likely to appear.

Coyotes are a regular and constant presence here in Phoenix.  I can’t recall a night without coyotes howling around our neighborhood. But this might be because we’ve always lived next to a large mountain preserve or on a golf course.  As the president of our local HOA, many dog owners here express to me their fear of having their dogs attacked and eaten – mostly people with smaller dogs.  In my 19 years in Phoenix, I know of only one “missing” dog that was likely to have gone the way of the coyotes.

Coyote Attacks:  Coyotes will attack small animals and the threat is real, although not so much to people. It is a common misconception that coyotes hunt in packs – they don’t.  While they live in family groups, they usually travel alone or in loose pairs but nearly always hunt alone.  This is one of the primary differences from wolves, who do form and hunt in packs. The coyote diet consists of insects, rodents, lizards, rabbits, birds, and snakes, but they also eat cactus fruit, mesquite beans, and flowers.  Gotta get that roughage, right?

Still, however, coyotes slinking around freaks people out, no matter what the actual threat may be, and fortunately, there are ways to reduce the threat.  Nearly a third of all reported coyote attacks are from places where coyotes were being fed. So, don’t feed wild animals and don’t leave food outside. Coyotes nearly always run away if you yell or throw things at them. Always keep your pet on a leash when walking in areas where you’ve seen coyotes. It’s smart to carry a walking stick, noisemaker, or mace to fend something off should there be an attack, keeping in mind loose domestic dogs pose a far greater risk of attack than coyotes (that’s that 59,000 to less than 1 number).  Humans are scary to coyotes and they would prefer to not be around us.  If you make yourself look big, yell at a coyote in the same thing you might to get your dog off your couch, they’ll leave you alone. 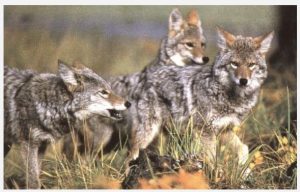 One last common coyote misperception:  We learned on a nature hike with a naturalist guide that the occasional loud, simultaneous, staccato yips, yaps, barks, and short howls are not an indication they’ve caught a rabbit or some other game.  He said it serves a dual purpose, the first being bonding. Just like domestic dogs who get excited when you arrive home, as the family group of coyotes gets together after a long day of solitary hunting, they’re all telling each other the “news of their day.” They are excited to be all together and happy.  The second purpose is to serve as a territorial display.  In other words, the coyotes are saying, “we’re a happy family, we own this turf, so you better stay away.”   Also, two coyotes can sound like seven or eight.  Group howling starts with the parents while the pups from this season and previous seasons join in if they are nearby or respond with howls of their own. Once one group of coyotes starts howling, chances are other mating pairs nearby will respond with chorus after chorus of group yip-howls – all saying “Hey! How are you?” and “Stay over there.” 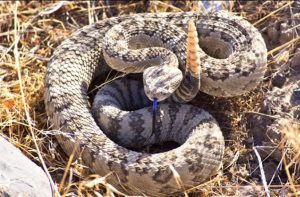 Rattlesnakes:  When first moving to Arizona and taking up hiking, I expected to see hundreds of rattlesnakes.  I was almost disappointed when, after 3-4 years I’d not seen a one.  Then, about five years ago, I saw two within a week.  One was crossing the trail 50-60 feet in front of me. By the time I reached the crossing spot, it was long gone and I didn’t see it.  The second time, I heard the distinct rattle of a snake from a nearby bush. I literally froze in my tracks, a lizard brain survival technique I later learned, and slowly proceeded to give the bush a wide berth.  I didn’t see that snake, either.

Curiosity led me to research snake bites in Maricopa County (one of the largest counties in the US).  Not only do they count them (about 200 annually) I found a database of rattlesnake bite incidents.  Fascinated, I began reading the hundreds of reported rattlesnake bite cases in Maricopa County.  After about 40-50,  a very distinct pattern emerged. You could summarize nearly every report as follows:  “I was… (fill in the blank: hiking, leaving my garage, walking along my street, taking the trash barrels out….) when I saw a rattlesnake.  I decided to…  (fill in the blank: try and remove the snake, kill the rattlesnake, scare it off the trail – in essence, ‘I decided to mess with the snake,’ and the snake bit me.”  Not once did I find a report saying “I was walking along the road and a rattlesnake jumped out and bit me.”  NEVER.  No one ever reported riding their mountain bike in the wild and having a “rattlesnake fall from a tree” and attack.  NEVER.  Not once did someone indicate they’d been meandering along in the great outdoors, come around a corner and had a rattlesnake attack them.  EVERY SINGLE snake bite report involved some sort of “I decided to mess with or harass the snake.”

Rich went on to express lesser concerns about bears, mountain lions, deer, bobcats, and, gophers.  I checked on bears and current statistics show 2-5 people die annually from bears, mostly near Glacier National Park. According to the “Wise About Bears” website, it’s less than one person per year on average, but I think they only track black bears.

To more properly target our fear of specific animals, I found the BBC keeps a good list:

For Rich at his Escondido home, few of his actual key risk factors are in the top ten (except for humans, snakes, and dogs) and I’m relatively certain hippos, elephants and crocodiles are most unlikely. I suspect gophers are his biggest threat.  Their sharp teeth and claws can excavate underground tunnels and burrow quickly. Not only will they wreak havoc in his landscape but could cause him to stumble, if he steps on a tunnel and it collapses.  If I were him, it’s the gophers that would keep me up at night.

One Response to Wildlife out to get you