What we fear, and why? 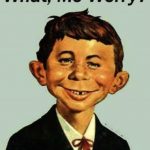 On a Sunday earlier this spring, before the whole Coronavirus issue, Maggie and I were hiking in the valleys surrounding nearby North Mountain, in Phoenix, AZ. As we walked a couple engaged in a vigorous discussion passed us, going in the opposite direction. They were speaking Russian, a language I’ve learned to recognize. They spoke freely, with no shyness or hesitation. As we walked I was struck by what my brother, Leif, had told me about riding the Russian subways when he and his family lived in St. Petersburg.

Leif and his wife would not speak out loud on the subways. Communicating meant pressing their lips carefully against each other’s ears or those of their children and whispering quietly. He had a genuine fear for their safety if other riders had been able to discern they were foreigners. The children, however, were fine. Growing up in Russia, they had no discernible accent and could speak freely. This experience made me think about how fortunate we are to live where we do. Today, few in the USA fear for their safety when speaking a foreign language or having an accent.

At the most local level, where we live, Americans rarely feel fear of “the other.” The Greek family that runs the bakery upsets no one. The Mexican family living down the block with the mother and father who aren’t so good at English, heading to work every morning, and often getting back late, leaving the kids to fend for themselves are completely fine. The neighbors all keep an eye out for them with a willingness to step in if anything looks amiss. Even the elderly Sikh man who’s never seen without his turban has been accepted, with some neighbors figuring out that not cutting his hair is part of his religious observance and they’re okay with that.

Given this is true, then why are we so easily manipulated to fear “the other,” by politicians and others wishing to use that emotion for their own ends? How sad when “the other” even becomes our own neighbors, friends and even family, when they have political positions different from our own. Unfortunately, it’s not hard to understand although difficult to do anything about, other than being aware and vigilant of what is going on.

Our attitudes of fear and even hate of “the other” is a primal survival mechanism. It is part of our instinct to avoid danger, to fear anything appearing to be different. It is what kept us alive in ancient times. As the writer Bill Bryson so eloquently states in his book A Short History of Nearly Everything:

“Not one of your pertinent ancestors was squashed, devoured, drowned, starved, stranded, stuck fast, untimely wounded, or otherwise deflected from its life’s quest of delivering a tiny charge of genetic material to the right partner at the right moment in order to perpetuate the only possible sequence of hereditary combinations that could result — eventually, astoundingly, and all too briefly — in you.”

But like many remnants of our reptilian brain, some of what goes on in that part of the brain has very little usefulness in modern society. When one race or group of people consciously or unconsciously fears for their safety, if their importance or control is threatened, they’ll develop defenses. This can quickly lead to exaggerated and negative beliefs about the other race or group to justify their actions to secure their own safety and survival.

We’ve outlived most of the need for this deep-seated instinct, but it still exists and is often manipulated by unscrupulous individuals and advocators. It is easy to cause us to fear a horde of “XYZ militant terrorists,” or whatever “the other” group is that is being exploited, or “this party or people” who want to destroy our country.  It holds barely a thread of something that sounds like fact, and any actual risk of such an event or attack occurring is often so remote to be downright silly. Yet newscasts are frequently monopolized with these unlikely and remote eventualities having little chance of ever impacting a particular listener.

For instance, around Halloween, many people fear their children are at risk of being given poisoned candy by strangers while trick or treating, even though there has never, ever been a documented case of this happening. Ever. Yet “urban legends” are regularly brought up and repeated, often as fact and often on the news.

I get angry when the media blatantly exploits these deep instincts. My brother and his wife’s fears on the Russian subway were probably justified. It made sense to trust their experience and reports from American friends advising caution. But it does not make sense to trust politicians or media talking heads who exaggerate or make up facts to make us fear other people when that fear, in context, is not justified. Or, at the very least, they should be required to put the fear they’re pointing at in the context of other real risks the population actually faces. But that’s another whole set of examples and considerations.

One Response to What we fear, and why?