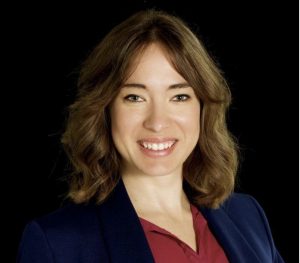 Today I was surprised to see an opinion piece, a letter to the editor, written by my niece, published in The Arizona Daily Star, the Tucson newspaper. Alona Sukhina came to our family when she was a very young girl, when her older sister married my nephew, Robert. Their entire family, including Alona’s parents, are now fully part of our family. Any significant holiday without their presence would seem empty. We love her, her sister and her parents. 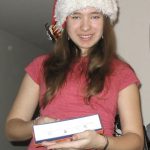 Alona at our 2004 Xmas gathering, showing off a gift.

I’ve watched her pretty much her whole life, seen her remarkable curiosity and incredible hard work as she excelled at school. I watched her fall in love and get married to a wonderful young man who just adores her. Alona and her husband, along with her cousins, give me tremendous hope for our future. I think you will enjoy Alona’s story as she explains her story of immigration and lessons she’s learned.  Today Alona is completing her residency in Phoenix. When finished she plans to to practice general pediatrics in Tucson. I can’t explain how immensely proud of her I am.  Her piece is below or you can read it at the newspaper’s website here:

I am a refugee who grew up in Tucson. I am an American, a millennial and a pediatrician. My family immigrated to the US from the Soviet Union in 1993, when I was 2 years old. Now considered a success story, my family would have likely failed without the supportive immigration policies of that time.

The programs in place then were made possible by voters in the late 20th century. Yet today, I see the threat and near extinction of the American dream for immigrants like myself because of people who might think their vote doesn’t count. Let me tell you why it does.

Thanks to the International Rescue Committee (IRC), my parents got decent jobs through a program designed to help refugees establish themselves with a stable income. We had access to doctors for preventative care thanks to Medicaid. That meant my parents could scrape together funds to get me a small telescope after expressing interest in becoming an astronaut.

Years later, I was gifted a microscope as my interest in biology grew. These gifts on a frugal lifestyle were explained by my mother this way: “Feeding your curiosity and mind was as important as buying food. When we saved enough money, the choice was simple.”

In high school, I was drawn to medicine as a way to provide the same support to others who ensured my family’s success. In medical school at the University of Arizona, I envisioned days as a pediatrician focused on preventing infections or cancer, scrutinizing growth charts, and screening, diagnosing, and managing all spectra of disease.

As a medical resident up in Phoenix, reality widened my gaze. I recently treated a teenager suffering from a panic attack because her parents were just deported. Recent restrictions led to their immigration applications being rejected.

I cared for a mother from Guatemala who struggled to find work due to lack of child care because rising naturalization fees prevented her husband from being here to help. Many legal immigrants visiting my clinic decline aid fearing being labeled a burden on the state and getting deported.

IRC’s funding is at risk, putting the benefits my family once relied on under threat. Medicaid’s enrollment is rising with COVID, despite state budget crises leading to cuts. Now with looming changes to the Supreme Court, the threats to the Affordable Care Act could leave millions of Americans without care.

People voting for policymakers elected from decades past who believed in the potential and promise of immigrants like me made it possible for my family to thrive. Individuals voting in 1960 elected people who wrote the 1965 Social Security Act, making it possible for my parents to get me a microscope instead of having to pay for preventative care. Votes cast in 1971 elected a senator who sponsored the 1977 Food Stamp Act, giving us access to a healthy diet of fruits and vegetables. Votes cast in 1978 elected legislators who passed the 1980 Refugee Act, providing the legal basis for my family’s immigration.

And because of all those votes and all of those programs, I will be a physician Arizonans can rely on to care for their children.

So if you question for one minute whether your vote matters, remember there are those who cannot vote who depend on you exercising your civil right. Those who are marginalized, those on the fringes of society, those too young to fill out their ballot, depend on our votes to stay healthy, educated and able to succeed.

I vote because my patients and community can’t afford for me not to. I hope you will join me.