Used or Abused: Garage Finds can fool you 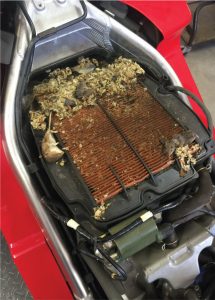 A 1999 Honda VFR that appeared to be in pristine condition had become home to mice, four of which were found dead inside the airbox, once the gas tank was removed.

By Steve Larsen, with technical assistance from Stu Oltman

Used bikes often come with a story that seems too good to pass up. Recently, neighbors of friends heard I was a “biker guy.” Soon after, I was examining their aunt’s Ducati Monster. It was a 2002 620 Dark, bought new, but she rarely rode it in all those years. The odometer showed 1,400 miles and it looked new. It had a nice custom seat and aftermarket pipes. They said it was always garaged and she only wanted $2,000 for it. It wouldn’t start because “the battery was dead.” Was I interested?

Knowing what is under the covers on a 17-year old bike without an in-depth inspection and test ride is impossible. Unused and neglected bikes present their own set of problems, which may require a detective’s nose to identify. I passed on the Ducati, but share that story to better examine the one that follows.

In 1999 my neighbor fulfilled his lifelong dream of owning a motorcycle. He purchased a new, bright red Honda 800Fi Interceptor as his first motorcycle. The VFR was a beautifully designed bike. One of the first that went very fast, cornered exceptionally well and was comfortable on a long haul. It had fuel injection with eight feeds, for very precise metering and a redline of 11,750 rpm.

It was never raced, abused or even pushed much beyond break-in-level riding. The purchase of a BMW 1200RT in 2010, with better luggage and greater long-distance comfort, eased the VFR to the sidelines. By late 2018, the VFR had only 9,238 miles on the odometer and hadn’t been ridden in nearly a year. Unrelenting insurance premiums and more vehicles competing for limited garage space convinced him to sell his beloved VFR. 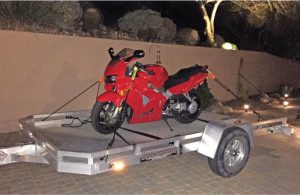 The VFR that arrived on the trailer was as pretty as could be, inspiring visions of carving up the curves while savoring the great bargain price. Unfortunately, it was short-lived.

Another friend agreed to purchase the bike at a discount. He felt lucky about this pristine “garage find,” and was excited to complete the deal and pick it up. The bike was washed and waxed, a new battery installed. It looked absolutely gorgeous. My phone rang when the bike failed to start.

Oltman confirmed I’d not overlooked any obvious steps, and he agreed to look at the bike. We removed the tank to check the fuel pump and air filter, and that’s when the reality of this motorcycle’s actual condition became painfully clear. The consequences of neglect and lack of regular maintenance are as bad for a motorcycle as driving it off a cliff. 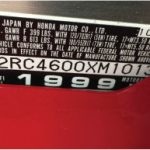 One routine check is the serial number plate that confirms model and manufacture date, as well as other identifying information.

The fuel pump assembly came apart in my hands. The rubber was crumbling. The aluminum spray mesh was in a ball, separated from the pump. On the workbench we hooked up a 12-volt battery directly to the pump. The pump did not move; it made no noise. Although doubting the potential effectiveness of my suggestion, Oltman humored me and watched as I whacked the pump a few times with a small mallet. Nothing. He could have said, “I told you so,” but only grinned.

We listed a new fuel pump assembly and turned our attention to the air filter. Removal of the top of the airbox revealed the bodies of four dead mice and their stash of seeds, nuts and droppings. A new air filter was noted, as well. 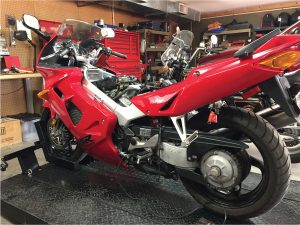 Once the VFR was up on the rack and its inner working exposed, its shortcomings and cost requirements became apparent.

The vision of a pristine, aged motorcycle was morphing into a bag of snakes. We cleaned the chain and tensioned it. With no marks on the included tool, we suspected it was the first time this was done. The chain tension was loose and sprocket teeth looked pointy; both would need to be replaced. A glance at the tire’s date code revealed they were new in September 2006. They’ll need to be replaced.

We found that while one headlight was good and bright, the other had the output of a votive candle. The brake light worked, and light illuminating the license plate, but the turn signals did not. Oltman opined that the right headlamp had a bad ground. Perhaps one of those mice had been sampling the wires? 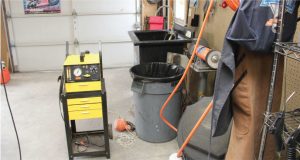 Two hours later, a bad ground wire was traced into the wiring harness. Not wishing to cut open the entire wiring harness to start hunting, a new ground was created by running a length of wire to the ground lug at the horn. The lights both worked great in both bright and dim modes, along with the turn signals and brake lights. Finally, things seemed to be coming together.

The next day we attempted to start the bike. Oltman has a Bilstein Fuel System Service Center, model R-2000. This tool pumps fuel into the system remotely, bypassing the bike’s failed pump. Made for commercial repair shops to clean and flush dirty fuel systems, it attaches to the fuel input and return lines. It is also able to measure the efficacy of the fuel regulator which, per the manual, should be 36 psi. Few shops have these systems and Bilstein no longer makes them.

Specialty tools like this Viper Spark Plug cleaner come in handy when giving a used bike a good once-over.

After circulating fuel for several minutes, we made several attempts to start the engine, with no success. We remove the rear sparkplugs, noting they had a heavy coating of gummed fuel, the color and consistency of dried molasses. We cleaned and gapped them to the proper specs. They showed a healthy spark in test, so we reinstalled them and tried again. The engine turned over, but refused to come to life.

Finally, we put a few drops of gasoline directly into the top of the throttle openings. It fired, running briefly as it burned up the gasoline we had dropped in. The dreaded conclusion was the same molasses was clogging the pintles and screens of the fuel injectors. It was also possible that our furry friends from the air cleaner box feasted on the wire feeding voltage to the injectors. To confirm that would require further explorative surgery. We paused for financial analysis.

New fuel injectors retail for $240 each (x4), but can be found as low as $209 each. Another option is to clean the injectors. AF1 Racing offers a fuel injector cleaning service (af1racing.com). They’ll clean, test, replace O-rings and strainers and reoil the injector body for $25 per injector. This was a big decision, so it was time to look carefully at what else the bike needed.

The brake fluid looked brown through the window, it certainly needed to be drained, flushed and bled. There was no coolant in the overflow container and white stains and green coolant were visible on the bottom of the water pump. 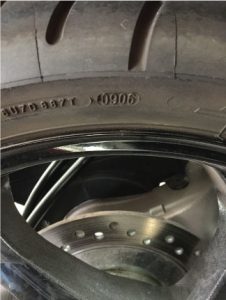 A tire’s manufacture date can be found on the sidewall. These 12-year-old tires definitely needed replacing, adding $300 to the cost of getting the VFR road-worthy and safe to ride.

We assumed a flush of the coolant system and adding new coolant would be all that was needed. While addressing fluids, we’d include draining and replacing the clutch fluid and changing the oil and filter.

Once we got the bike off the lift and on its center stand, we checked both wheels by spinning them and watching. We verified that they were smooth, didn’t wobble and that when the brakes were squeezed, the tires immediately stopped. A wobble in spoked wheels can be fixed, but with alloy wheels, probably not.

Before starting on the repair list, we needed to determine if the bike was economically unrepairable. What we had found was getting dangerously close to the cost of repair exceeding the value of the bike. The new battery, fuel pump and air filter was $511. The cost to remove and replace the injectors (whether cleaned or replaced) would be another $350 for labor. Cleaning them would be $100 plus shipping and replacing them $840. Tires add $300, plus a new chain and sprocket for another $300. Changing all the fluids was $360.

The minimum expense to get the bike to running safely was $2,181, plus the cost of diagnosis, electrical repair and chain cleaning. If the injectors needed to be replaced versus cleaned, it became $2,911. Kelly Blue Book lists the bike’s retail value at $2,940 in excellent condition versus a trade-in value of $1,990 if in good condition.

My neighbor would never have withheld the bike’s maladies that he knew about to a prospective owner. The friend who intended to purchase the bike, after hearing the details of this story, and having the price dropped to zero, still declined to complete the transaction. Instead, the bike would be donated, accompanied by a list of its known deficiencies.

Most riders have no idea of the speed and degree of deterioration that occurs to a motorcycle when it’s stored for a long period of time and regular maintenance is neglected. When looking to acquire a used motorcycle, we’re accustomed to looking for evidence of hard riding.

It is as important, possibly more, to eliminate prospective bikes that have sat ignored, unridden and unmaintained for long periods.