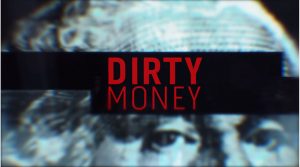 I found DIRTY MONEY, a new series on Netflix, shortly after watching the amazingly funny Netflix send-off of 2020 called “Death to 2020.”  If you’ve not watched it yet, do so. Death to 2020 resulted in at least a half-dozen belly laughs and more subtle snickers than I could count.  But now onto Dirty Money.

What makes Dirty Money great is each one-hour episode packs a full documentary movie.  The level of research, quality of the writing, visuals and skills of the interviewers are some of the best you will find on television today. This is genuinely in the same league as 60 minutes and similar top-notch documentary efforts.  I found the characters show-cased in these highly compelling stories, down-to-earth, real and articulate.

Each of these stories has two sides, and they do an incredible job of presenting both or at the very least, having both sides fully articulate their rationale for what they are doing.  In the Payday episode, I started with admiration for the drive and determination of an entrepreneur who built a business, then began seeing the impact his business model and approach was having on the lives and personal situations his business actions caused his customers. Then I see the entrepreneur fighting for his rights.  As the guy who trained him to race put it: “If you’re racing in a series, and there’s a big thick rulebook for white drivers, and a tiny little rule book for Native American drivers, you’re going to start hiring Native American drivers.” At first I admired his ability to have found a loophole to exploit, but then you realize that the loophole is illegal, and you see the gyrations the company has to go through to hide the way in which it cheats, and then they take you back to where you see precisely how little people are deceived and ripped off and the impact on the company and its employees.  It goes back and forth, with a bit more being revealed in each scene.  I suspect some will end up siding with the victims and others with the company founder.  That says more about you and your values than the people in the film.  Rotten Tomatoes reported 100% of critics gave the series a positive review.

The series has two seasons, with six episodes each.  They can be watched in any order.  So far I’ve watched the following ones.  Here are a few brief comments on each.

Season 1, Episode 2: Payday.  About Scott Tucker and the Payday loan business he builds from scratch, but then loses when he crosses the legal line.

Season 1, Episode 5: The Maple Syrup Heist.  The great Canadian maple syrup heist is about how (and why) someone manages to steal thousands of barrels of maple syrup. Unlike most crime dramas, this one really happened.

Season 2: Episode 1: The Wagon Wheel.  I bank at Wells Fargo Bank.  After watching this, I want to switch banks.

Season 1: Episode 3: Drug Short. Tells the story of Valeant Pharmaceuticals and is one of the best stories in this 12 episode line up.  This is an amazing story, remarkably told.  Were it not for a relatively small discovery and a failure of a company to quickly notice it and cover it up, no one would ever be the wiser.  You will learn about some of the built-in checks and balances with public companies.

Season 1: Episode 6: The Confidence Man.  If you’re a big Donald J Trump supporter and don’t want to know any more about him, you might want to skip this one.  The episode chronicles Trump’s long business career, before he became a politician, in great detail. It charts most if not all of his business initiatives and results – where he did remarkably well, and the areas in which he did not. It also provides new insight into how he manages, some of his special talents and capabilities.

Season 1: Episode 1: Hard NOX.  This is about the Volkswagen emissions scandal.  As an owner of one of the TDI engines targeted in this story (ours is in an Audi Q5 and Audi is owned by Volkswagen), we’ve dealt directly with the results of this scandal.  Again, the story of what Volkswagen did and how they were exposed is absolutely riveting television. This episode is one of the key reasons I am so high on the series.

Season 2: Episode 3: Slumlord Millionaire.  This documents the rise of Jared Kushner from an heir in a prominent real estate empire to a top White House advisor.  Make no mistake, this is one exceptionally smart young man and the country will be hearing from him for years to come.