In high school, my daughter Ginger was cast in a theatrical presentation of the Sound of Music. She threw herself into the two roles she played, greatly enjoying all the rehearsals and tasks associated with getting the production ready for an audience.  After opening night, she had issues with her performance and came to me, asking what she should do.  Finally, a problem with which this father of a teenage daughter might actually be able to help! Because you see, I understood her problem and also knew how to fix it. The same thing had happened to me.

When I was a senior at Mayo High School in Rochester, MN, I was cast as Tom Wingfeld in the Tennessee Williams play, The Glass Menagerie.  Tom is a crucial character in the play, acting as both narrator and protagonist. It is one of the most iconic stage roles ever written. A good many famous actors have given it a go, including Kirk Douglas, Sam Waterston, John Malkovich, Christian Slater, and Joe Mantello.  While my performance was never in the same league as a professional actor, I like to think they may have wrestled with one of the same issues I had with the part.

The play is heartbreaking and any actor worth his salt should have the audience in tears in his final soliloquy. In these final lines, Tom’s character says farewell to his mother and sister, saying he’s left home and will never return and asks his sister, Laura, to blow out the candles.  Here is Tennessee Williams, writing these remarkable words and lines that will catapult him from obscurity to fame.  Rehearsals went well, the actors all knew their lines and the production crew, headed by assistant director Pati Knappe, was ready.  Into dress rehearsal, we went. After weeks of closed rehearsals, here was our chance to perform in front of an audience for the first time.  Our Director, Dwain Johnson, cautioned us to work with the audience, pause when they reacted, or laughed. I heard him but didn’t absorb the message.

It began in the middle of the first act.  People were laughing at some of my lines.  I was furious.  This play was not a comedy, it was serious and tragic.  I began pushing my lines forward when I felt them starting to laugh, to keep them quiet.  During intermission, Mr. Johnson got us together for a brief pep talk.  To me, he said, “Steve, you’ve got to understand, comedy and tragedy are very close together.  If you want them to cry during your final soliloquy, you need them to laugh with you first.” I wasn’t sure what he was saying but knew he understood more about it than I, so I took his advice and began working with the audience, allowing them to laugh and even enjoying it when they did.  My soliloquy went fine.

Our two live performances were on Friday and Saturday nights. Before opening night, Director Johnson gave us a pep talk and in it, elaborated on our experiences in dress rehearsal.  He explained, no doubt for my benefit, that when looking at the expansive line of human emotions, most people see one end anchored by hilarious laughter and the other end in tragic weeping.  “But it’s not like that at all,” Johnson explained. “The fact is that when you look at this vast range of emotions, laughing and weeping are together at one end of the spectrum, and indifference is what is at the other end.  So, if you want to get the audience to cry, get them to laugh first. Moving them from laughter to tears is a short distance, and it’s easy.” I remembered what he said for those two performances and for the rest of my life. So, when my daughter asked me how to fix her stage problem, I knew what to tell her. 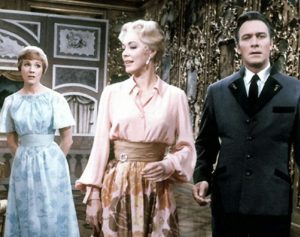 Ginger’s problem was a bit different.  In the Sound of Music, Ginger played Baroness Elsa Schräder, the fiancé to Captain von Trapp.  The Baroness, after being introduced to the children, begins to see how much von Trapp’s children are attached to Maria and suspects the Captain may harbor feelings for Maria as well.  She deviously maneuvers to get Maria out of the way and finally orders Maria back to the convent. Ginger confessed to me, “Dad, I can really feel the audience when I’m doing this and they don’t like me at all – so I’m trying to do my lines right but I’m also trying to be nice at the same time, and it’s just not working.  See, the audience doesn’t know it yet, but in the next act, I make everything okay because I tell Maria that the Captain really loves her, and then I leave.”

Just like I trusted Mr. Johnson, it seemed Ginger trusted me.  She nodded and said, “I’ll try that.” At the performance that evening, I watched in awe as Ginger threw herself into making the audience dislike her. And boy, did she nail it.  Near the end of the first act, when Ginger’s Baroness Elsa character banishes Maria back to the convent, I heard the woman seated next to me involuntarily hiss in hatred toward the stage. The distaste the audience was feeling toward this character was palpable.  I was thrilled.

When intermission was over, the second act commenced, and the scene came where Baroness Schräder bowed out with dignity and caring, telling Maria that Captain von Trapp truly loved her.  I didn’t have to look over at the seat next to me to know.  Yes, the woman was in tears!

But Ginger’s part in the production wasn’t over.  After her final scene as the Baroness, she went backstage, got out of the wig and fancy dress the Baroness wore, because she had another part to play. She donned a costume and funny wig with large pigtails sticking out both sides of her head, taking on the role of the woman who would refuse to leave the festival stage after her act was finished, generating gales of laughter and round after round of ovations, giving the von Trapp family time to slip away.  This character generated tons of laughs, no doubt a relief for Ginger.

But the best part for me was at the end of the play.  When the curtain call came up, Ginger first took applause for her role as the festival performer, an audience pleaser even though it was a non-speaking part.  But the real fun came when she removed the silly pigtail wig and revealed herself to be the actress that had also played Baroness Elsa Schräder.  As her father, I am thoroughly biased and non-objective, but I swear to you, the amount of applause for her went through the roof!

Epilogue:  When people think of theatre, the two-faced mask is one of the oldest and best-known symbols illustrating comedy and tragedy, happiness, and sadness.  The symbol dates back to Greek mythology and has represented creative arts for decades.  But to me, I always see it as those two very similar emotions, so very close together, and so far away from indifference.