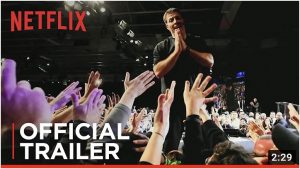 It was in high school when a series of classic motivational literature found its way to me. It was after I’d begun to see there was a path for me to succeed in school. The books told me I wasn’t trapped by my circumstances. They said no one but me could decide how I wanted to think about something, and by controlling my thoughts and attitudes, I could impact my life for the better.  The key books I recall reading at least once and several multiple times, were: 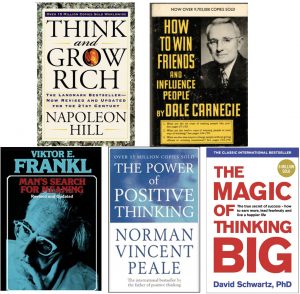 I loved these books and believe they did indeed change my life.  When Maggie and I met she’d had a brief experience working at a place she referred to as the “Rah-Rah Company.”  Apparently, their hyper reliance on “positive news only” over realism, and questionable ethical decisions by their president turned her off and I too began to think these books might be too simplistic.  As a result, I switched to books offering more practical advice on management, personal, and business techniques promising ideas that could be immediately implemented.  In addition to reading every new top-selling business book on NYT’s bestseller lists, I occasionally dipped into the self-help genre and enjoyed things like the “Seven Effective Habits” book by Steven Covey, Tim Ferriss’s “The 4-Hour Workweek,” and Spencer Johnson’s “Who Moved My Cheese?”

Tony Robbins was a guy who was somewhere in the middle.  I read a number of his books and bought some of his training programs and found them helpful, especially the courses which I would tend to repeat over and over in my car on my way to work.  But I worried that Robbins may be attracting “groupie-types” or cultish followers who preferred to sit in seminars versus getting things done.  It was with ambivalence and suspicion I watched the documentary “Tony Robbins: I Am Not Your Guru.”  The documentary, however, changed my opinion of him.  Yes, he’s still tall with a huge chin and deep growly voice, but I am now far more positively inclined to what he is doing. The documentary doesn’t sugar coat what he does.  But watching this I came to believe if you want to see the positive in this you will, if you chose to see the negative, that is there too. It will depend a great deal on your personal perspective. 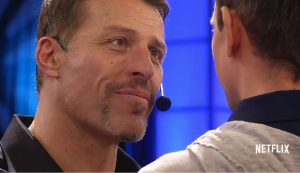 Kudos to Robbins’ longevity and the long string of powerful endorsements from credible and well-respected people.  I liked Robbins’ approach in the documentary and his willingness to give the film crew nearly unfettered access to him and his staff as they plan and execute one of their events.  The Robbins organization appeared to never once try to tell the filmmakers what they should say or not say and made no attempts to stifle criticisms or act defensively.  I’m now of the opinion that on balance, he has figured out a way to help people find their path in life and to do it quickly, effectively, and honestly.  He’s not perfect, but I have no doubts about his sincerity.

Here is a link to more about my book reading history.