When you find yourself watching a mini-series 4 times, it probably means you liked it.  Maggie and I rarely share the same affection for television programs. So when we are both uncompromisingly enthusiastic about a production, you can be sure it’s special.  And Good Omens is quite special.  Here’s why. 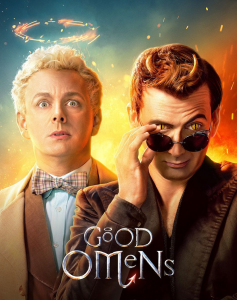 Besides a 1930’s Bentley, it has the apocalypse and its four horsemen, angels, demons, magic, a hell hound, a flaming sword, the Antichrist and witches.  It is based on a brilliant novel written by two amazing writers – Neil Gaiman and Terry Pratchett.  The show stars Michael Sheen and David Tennant, a pair of terrific British actors at the top of their game.  American actors Jon Hamm, Frances McDormand and Michael McKean also play key roles, and Englishman Benedict Cumberbatch shows up, too.

What most drives this unabashedly endorsement is that it is pure fun – every single minute.  We’ve suggested it frequently to friends and been rewarded with grateful thanks every time, without exception.  Like the movie “The Princess Bride,” it does not get old.  Suddenly one of us will think of a particular scene, say one of the ones with Michael McKean and Miranda Richardson, and before we know it, the other one is laughing and we’re saying, “Oh God, let’s watch it again.” You’ll find it on Amazon Prime and, rumor has it, there will be another season starting soon.