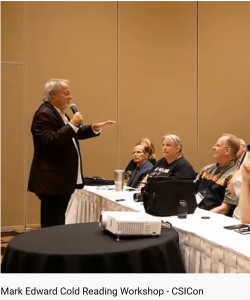 Video not the best, but the audio is fine.

Recent explorations into ethical questions have led me down a variety of rabbit holes, eventually to the whole psychic phenomenon and people claiming to be mediums and able to predict the future. One fascinating character is Mark Edward.  I watched a 90-minute presentation where he explained how he and others in the “business” of psychic predictions, fortune-telling, and cold-readings do their “amazing feats.” Edwards is a former magician, having had long runs at the Magic Castle in Los Angeles. Like Penn & Teller, David Copperfield, and James Randi, he dutifully explains that what he does is a trick. There are no supernatural forces at work.  He, and others offering psychic experiences, are superb listeners and skilled observers.(1) They’ve learned to tap into the pattern-seeking aspects of the human mind. As he demonstrates in the video, it turns out to be relatively easy to manipulate someone into believing the medium has contact with the spirit world or can hear and speak with dead relatives – even in an audience of confirmed skeptics. But, in fact, they’re all scams and have been proven so time and time again.  Nevertheless, people continue to be taken in.

If you know someone who has paid money for a psychic reading and they feel they got their money’s worth, good for them.  However, it’s best to understand what actually happened: the professed psychic used his/her repertoire to present ideas that would match the individual’s profile – the willing believer – and connected the dots.  The dot picture – and all the connections – were already in the persons head.  It’s the way our minds work. 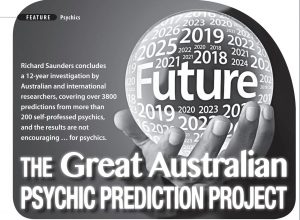 Along these same lines I found a report, published in December of 2021, about a twelve-year study of psychic predictions. It is exceptionally well done, brilliantly documented and you can read the whole study here.

During the twelve years, researchers found and documented 3,800 predictions made by those claiming the ability to foretell events by paranormal, supernatural, divine, or spiritual means.  Finding them required digging through television programs, radio broadcasts, magazines, newspapers, websites, YouTube, and other social media.  They tracked the predictions and recorded the results.  Here is what they found:

Most of what was predicted did not happen. Anti-gravity did not become a reality, Prince Harry did not become king, COVID-19 did not “disappear” in December of 2020 and the president of France was not assassinated.  And the corollary most people miss, most of what happened was not predicted. Psychics did not predict COVID-19, Osama Bin Laden’s death or even that of Robin Williams.

As Tim Medham, the executive officer on the study said, “If my car mechanic was right only 11 percent of the time, I’d get a different car mechanic.  But if, overall, all mechanics were right only 11 percent of the time, I’d begin to think there was something seriously wrong with the entire industry.  The results indicate nothing better than educated guessing – or even uneducated guessing – and certainly no better than any non-psychic could do, and probably a lot worse.” 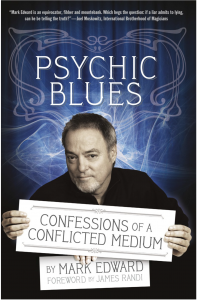 As I watched clip after clip of supposed psychics, knowing it was a trick and how it was being done, I became more and more convinced those choosing to do this work have to be sociopaths, perhaps even psychopaths.  They are conmen and conwomen – people with little, if any, ethical compass and only pretending to care for the feelings or well-being of others.  As Mark Edward revealed in his presentation (and in more detail in his book: Psychic Blues: Confessions of a Conflicted Medium), it is nearly impossible for him to feel good about what he does.  His rationalizations for why he continues to do it – “it’s my living, it’s the only thing I know how to do” – rings hollow.  How “psychic mediums” Tyler Henry, Miss Cleo, Caputo, and John Edward can allow and encourage people to believe stage tricks are not tricks but real precognition is despicable.

Better understanding of how our minds work is a hobby for me. Since high school and competing on the debate team, why people believe what they believe and think the way they do has intrigued me.  A couple of years ago, my friend Steve Pittendrigh gave me The Drunkard’s Walk: How Randomness Rules Our Lives by Leonard Mlodinow. The book exposes how randomness in everyday events is frequently misinterpreted. That book quickly led me to Michael Lewis’s book about Amos Tversky and Daniel Kahneman titled The Undoing Project: A Friendship That Changed Our Minds.  The New Yorker has a terrific article about the book here.  This pair of researchers were able to demonstrate beyond doubt that humans are not nearly as logical as we believe ourselves to be and are highly influenced by external forces.  Their work won Kahneman the Nobel Prize in Economics. 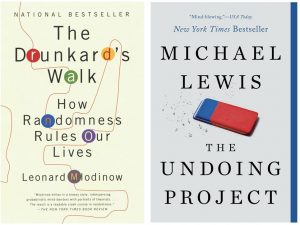 Our minds are wonderful things. There is more going on inside our heads that most of us know.  The better you understand those who would seek to mislead you for their own selfish purposes, and the tricks they use to do that, the better off you will be. I’ve left this link to last.  It shows precisely how cold-reading works and how easily some one can mislead us.

One Response to Scary Psychics