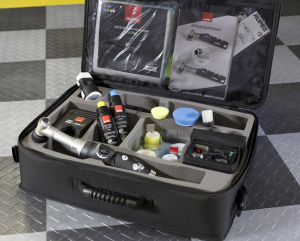 The RUPES Bigfoot Nano iBrid is a micro-sized, professional polishing detailer sold with a lush assortment of accessories.

By Steve Larsen. Photos and testing assistance by Clayton Saffell

The idea of detailing a motorcycle as one would an automobile is not often considered a sane activity among my riding friends. In fact, rarely paying attention to the cosmetic condition of one’s muddy mount can be a badge of honor. Round-the-world rider and MCN contributor Dr. Gregory Frazier once told me he’d not washed his 1981 BMW G/S in five or six years and suspected dirt and dead bugs were all that was holding his front fairing in place.

On the other end of the scale, Stu Oltman, also an MCN writer described to me a slow methodical bike cleaning method in which in addition to cleaning, he carefully examines the bike, checking for loose screws, flopping plastic bits or missing nuts. He said it was rare not to find a screw missing or some other part needing attention. While following Stu’s example for my own bikes, I’ve still never felt the need for anything beyond normal motorcycle cleaners, a few good rags and some wax to polish the shiny bits at the end… until now.

RUPES, a really big deal in auto detailing circles, manufactures high-end power tools. Designed and built in Italy, RUPES products introduced automation to many traditionally hand-only tasks, such as the first electric random orbital sander and first-ever electric palm sander. RUPES USA, Inc. was founded in 2015 when it acquired Cyclo Toolmakers, a Colorado based tool manufacturer known for the dual headed Cyclo Polisher. Since then the US offices have completed construction on a state-of-the-art 40,000 sq. ft. facility and started manufacturing a number of the RUPES tools for the North American. Their BigFoot brand tools are stalwarts in most detailing shops.

Two years ago RUPES introduced the new BigFoot Nano specifically to work in smaller places and on smaller vehicles such as motorcycles. At SEMA in October of 2018 it was clear they knew they had a real hit on their hands. While at first being put off by the price point (after all, this tool was designed for use by professional detailers), we’ve slowly come around to thinking there are certain home garages and groups of riders where this makes total sense. Let’s talk about the custom bike world, for instance.

(Left) The Nano easily reaches into places no other electric polisher would ever go. (Right) Notice the like-new gauge cover on the left side of the finished produce vs. the half we did not do, which still has haze and scratches.

Who hasn’t been impressed with a display of outrageously mirror-finished custom-built motorcycles at Daytona or Arizona Bike Week? Until now, buffing paint on a motorcycle to be a trophy contender meant hours and even days of effort, all by hand. The BigFoot Nano iBrid changes all that. It weighs in at just over one pound (520 grams, without battery pack or power supply). The light weight and size (14 inches long with a grip averaging 17/8 inches in diameter) and with its 1.25 inch diameter pad, it easily slips around curves and angles on every part of a bike. If that were its only application, it probably wouldn’t be worth a review or consideration from MCN readers. However, in the few weeks spent testing our loaner unit, we’ve found it ideal for restoring a brand new luster on the plastic covering our speedometer, tach and other gauges and in restoring glazed-over, dull plastic headlight covers to a like-new condition and a host of other applications. It brought a decades-old BSA gas tank to a near perfect shine in under an hour. It can polish panels as small as one-inch wide and remove grit, debris, and grease from recessed corners of a motorcycle. 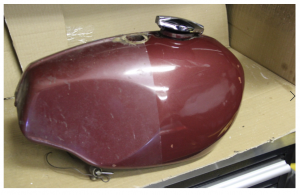 This is an original gas tank from a 1966 BSA. We taped off the back half of the tank and cleaned the front. It is a remarkable transformation, with the cleaned and polished side looking almost new.

We tested the long neck version (shown above), the HR81ML/DLX, which is battery operated with a Li-ion rechargeable battery. It also is available with a shorter neck. Foregoing a cord is a simple but remarkably useful upgrade from old style corded buffers, even without the revolutionary small size. That said, with the iBrid technology, it can just as easily be used as a powered tool by plugging an AC adapter into the bottom. The Nano quickly switches between rotary to highly precise 3-mm and 12-mm random orbital actions. A polisher with a random orbital action is far less likely to damage a painted surface than a simple rotary action unit. We especially liked that the kit included a second rechargeable battery. Better still, the recharge time (20 minutes) nicely matched up with the continuous service time of 30 minutes, so just when we ran out of juice, our second battery was fully-charged and ready.

Our kit included all of the items below and even the exterior case is a sight to behold (nicely stitched, heavily padded with a large, handy carrying strap): 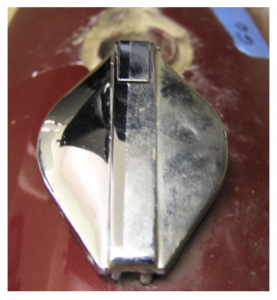 We also polished one side of the gas cap, leaving the other side as original. The entire tank took less than 45 minutes to bring it to a like-new condition. Traditional polishers would be unable to reach areas that the Nano easily cleaned and buffed to a high shine.

As a tool designed for professionals, this unit is not inexpensive, so we experimented with it as an adjunct to auto detail work, assuming many of our readers may also drive and clean their other vehicles. We found it to be perfect for achieving that final level of detail, especially on smaller components. Modern cars boost an increasing number of shiny black trim pieces both inside and outside the car. The Nano does a brilliant job of restoring those surfaces to their factory-fresh appearance. The Nano’s size allows a high level of precision in a variety of hard-to-reach places.

The light-weight Nano fits easily into one hand. Very little pressure is needed to control the polisher. We found what works best is to grip the Nano with one hand and steady the neck with one finger from your other hand to control its direction. Five speed settings and a soft start feature provide confidence and exactness with the tool. On the one hand, using pads this small allows access to tiny spaces. On the other hand, if you are removing any measurable amount of oxidation, the pads quickly fill and need frequent changing. Thankfully, RUPES includes six each of the 1¼ inch pads and you’ll probably need all six to cover any significantly sized area. With the smaller pad, we found that covering an area the size of a cell phone was about right for a single pad. You can double that with the larger 2-inch pads. Cleaning the pads is simple. Use warm water and a small amount of dish soap. Rinse thoroughly and let them air dry. You can use compressed air to clean out the pads during use to extend the time between full cleanings, but make sure you reapply the compound if you do.

For around $600 you get the entire, well-provisioned kit. Find it online at Amazon.com, eBay and other suppliers. Local distributors in your area are listed at www.rupesusa.com/distributor-locator. While a no-brainer for professional detail shops for which it is intended—and where it pays for itself in saved time and better work in a matter of weeks — it’s a bit of a stretch for the average home garage. But if you enjoy doing your own work and take pleasure in using exceptionally well-crafted tools, this could be for you. After a month’s testing we had some lingering reluctance in reaching for our wallet given the premium price. However, the superb design, high-quality workmanship and pure delight at using such a perfect instrument, made it far from impossible to justify. If you can’t get over the price, you might try hinting around that it would make an awesome gift!