When MCN Editor-in-Chief Dave Searle called to check my interest on attending the Saxon Motorcycles 2006 launch event, I first wondered how many other writers had passed on the opportunity before he’d thought of calling me. My second thought was to wonder if he knew of my wish to understand choppers and the people who make and ride them? And lastly, did he know of my secret desire to throw a leg over one of those bad boys – what are they like, really? As it turns out, none of the above. It was my proximity to the launch event, the fabulous San Marcos Golf Resort in Chandler, Arizona, that had him reaching for the phone and dialing my number. 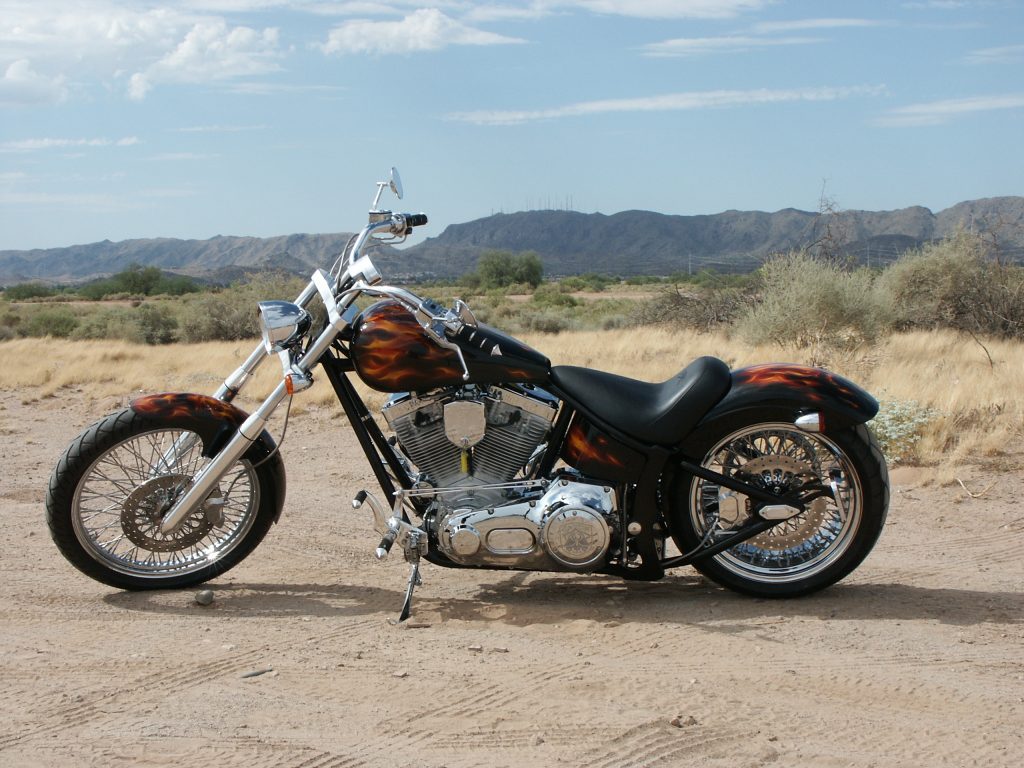 Let’s get one thing clear at the outset: if you are expecting the classic Motor Cycle Consumer News motorcycle evaluation with dyno testing, braking measurements, Walt Fulton-style handling assessments, ergonomic calculations and a massive in-depth engineering evaluation, you will be disappointed. This is not what owning and riding a chopper is all about. No one has ever selected one chopper over another because of its superior stopping distance or how it scores in the categories listed above.

MCN readers, for the most part, evaluate motorcycles in the context of the best bike match for their particular riding style. My sense is that MCN readers choose accessories on how well they’ll enhance the riding experience and value. This is not true about choppers or their owners. While choppers are somewhat fun to ride, for limited distances, for most owners, it really is not about the ride.

You are better off viewing choppers as works of art. Unlike traditional art objects that hang on the wall or stand on the coffee table of your home for guests to admire, chopper art is displayed in the garage. More than that, you can mount your work of art and ride it to a new exhibition location where those who appreciate this sort of art can admire, compliment and discuss your acquisition with you.

As in the art world, the price of a one-of-a-kind work from a well known master such as Arlen Ness can be astronomical. Choices of reproductions, models from lesser known builders, or “semi-customized” models of more mainstream bikes dramatically affect the price. Once a purchase is made, the “picture frame” for the work of art really is the owner/rider. After one picks the right chopper, the wardrobe choices (belts, boots, jeans, even tattoos) and bike accessories are chosen to enhance the newly acquired art object. . This is where the analogy goes a bit astray because few people put a painting over the couch and then paint in an additional mountain to the landscape or add more yellow to the sunset.

Saxon Motorcycles seeks to give its customers a bike with a unique look at an affordable price. Ranging in MSRP from $ 22,595 to $26,995 and fewer than 200 of each model available worldwide in 2006, you’ll see one Saxon motorcycle for every several hundred Harley Davidsons you pass. Each year Saxon plans to come out with at least one model that will be made only that year, moving you further up the exclusivity trail. For 2006, the model is a retro-modern Black Crown, a Gard Hollinger (LA County Choprods)-designed bike that appears totally like a one-of-a-kind bike. During the dealer meeting I attended, the company emphasized a focus on building high quality bikes that are reliable and contain more proprietary components, including unique Saxon pegs, grips, coil covers, shift linkages and keys.

Using the term “performance” in the same sentence with choppers is problematic, as I mentioned above. What performance these bikes have is limited to straight line acceleration and then, I suspect, the noise they make in the process. Staying true to the work of art theme, I contacted the factory a few weeks after the launch and suggested a very non-MCN type test, but one that would address my art work point of view. As a result, one Saturday afternoon I borrowed a new 2006 Saxon Fire Storm motorcycle and headed out with the goal of hitting some local watering holes frequented by those likely to appreciate this sort of ride. Desiring to look the part, I discarded my normal riding attire of padded leather pants, padded mesh jacket and European-style riding boots, full face Arai helmet and Teflon reinforced gloves. Always a believer in dressing for the accident, I had padded underwear under by blue jeans, a fully-padded leather jacket , and I found a black full-face helmet and rubber-soled cowboy boots. I sort of fit in.

Heading from Phoenix out to Cave Creek, I found the bike was not very comfortable to ride. Being somewhat inseam challenged, I had to reach for the bars and the front controls were a good stretch for my legs. With more time and some adjustment, some of these could have been overcome, but not all. Navigating through Saturday afternoon traffic at Cave Creek, however, I could feel the glances and occasional outright stares. When I parked the bike at Harold’s Cave Creek Corral, an old west saloon and restaurant and favorite haunt of many a Harley rider, I took a spot in the front row. Inside, I got a table where I could observe the bike through the window. Sure enough, all through my hamburger and diet coke, the bike was ogled. Other bikers seem unable to pass it without slowing down, at the least. Most stopped, stared, walked around it, and talked amongst themselves. Hey, it gave me a nice feeling and it wasn’t even my bike.

Like nearly all chopper owners, Saxon customers are dual income, 40ish and own at least one other bike. Most Saxon owners come from the Harley camp and are looking for an “affordable custom,” a “real chopper” but not a one-off that won’t run or a poorly designed assemblage of off-the-shelf parts. It was interesting to learn that the average chopper enthusiast spends approximately $8K per year on the hobby, including accessories, trips and apparel.

Customers ordering a bike have a wide variety of paint schemes to choose from and the bikes can be further customized with special chrome and billet wheels, sissy bars, 2-up seats, several handlebar options and black out packages. All models feature the S&S 96 or 111 engine, are EPA and CARB certified, and carry a two-year warranty.

There are currently 30 Saxon dealers around the country. Go to (site no longer exists) for more information.

I enjoyed meeting the Saxon team and had fun riding the bike. However, besides the general disregard for protective gear, two aspects of the chopper culture totally infuriate me. The first is the blatant disregard for others as it relates to loud pipes. Loud pipes are largely responsible, I believe, for turning general public attitudes against all motorcyclists. The second is the practice of riding to a bar, having a drink or two, and then getting on the bike and heading to another bar. Some rides are even organized to encourage this. Manufacturers play to this image by building bikes with drinking themes or touches (oil reservoirs shaped like a mini-kegs.) Even Saxon names a part on one of its bikes–the 390–which is the police code call for drunk and disorderly conduct.