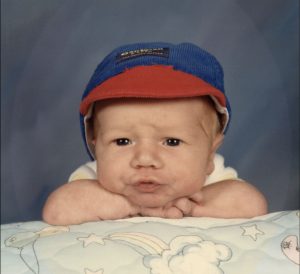 We’re coming up on nearly 30 years since our family was forced to say goodbye to my son, Eric.  The need to convey to those who’ve never met him the joy he brought to our small family during his two too short years in this world was eclipsed by the enormity of that task.  We have countless boxes of photos and hours and hours of videos in which he puts in an appearance. Not everyone knows about Eric, who was born in September of 1990 and died before his second birthday, in July of 1992.

Over the years I made several attempt to bring order to the chaos and tell his story.  Nothing worked and I failed miserably.  Every attempt dredged up pain but also found me bogged down in the incredible complexity of the task.  I’m only a so-so story teller and when you combine that with grossly amateurish video editing skills, my results were too long, full of confusing sequences, frequently out of order and characterized by awkward edits and segues. It turns out love, hard work and good intentions aren’t enough. After a few weeks on each attempt, I’d throw up my hands and give up.

After being united with my long-lost daughter, Christie Will in January of 2019, the need to complete this project hit me even harder.  You can read more about how Christie found me here and here.  Telling the story of Eric’s short life could no longer continue to be kicked down the road. I wanted Christie to know about her half-brother, the little boy she never met but who’d brought such joy and love to her sister Ginger and our family.

Then I remembered Nick Larsen.  Nick is my first cousin, once removed – meaning he’s the son of my cousin, John Larsen and his wife, Diane.  Nick lives in the Twin Cities and is a professional video editor.  Maybe he could help me? Nick and I talked and I sent him hours and hours of video plus my still picture catalog.  We agreed on a two part project.  The first (Part 1) would be a short (5 min.) video to capture the essence of what Eric meant to all of us.  The second (Part 2) would be longer, more extensive and include additional people Eric touched as well as excerpts from his memorial service.

Just in time for Christie’s visit to us in Phoenix in March of 2021 he finished. Here is a link to a short video about Eric, Part 1 of this project: 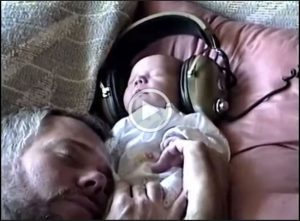 After you watch it, I think you will agree – Nick conveys the story of this sweet little boy’s life in a wonderful and sensitive way.  Maggie and I are both thrilled with it.  We’re excited to be able to finally share a bit of this very special little guy.

4 Responses to Never too late