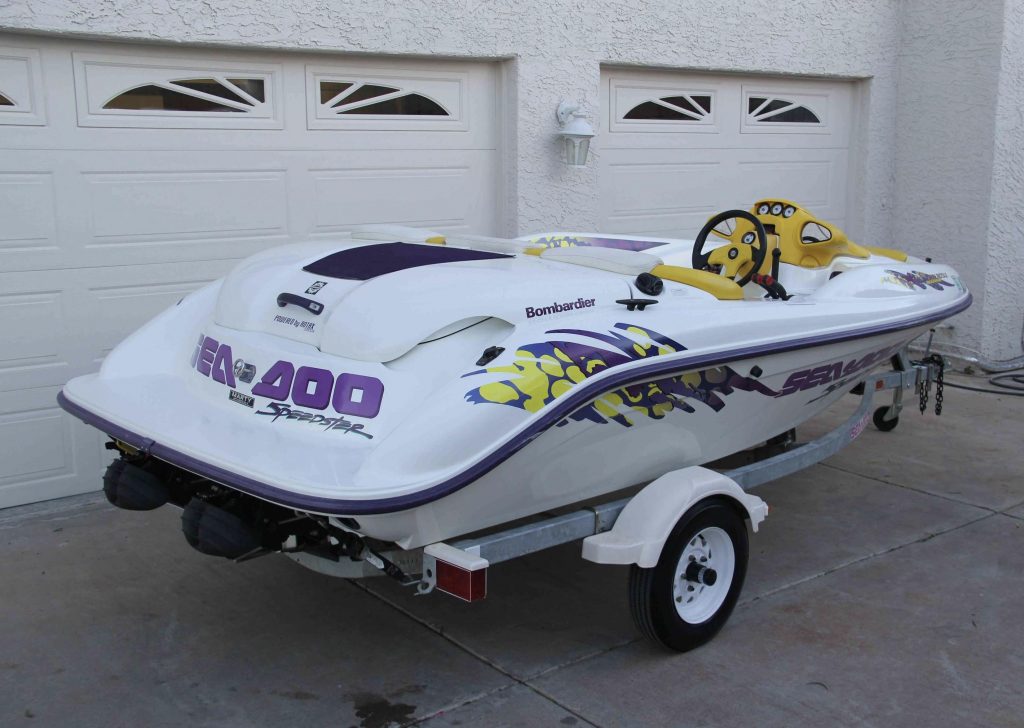 Living in New York in the early 90’s I caught a clip on television of a new radical boat from Bombardier’s Sea-Doo division called the “Speedster.”  This jet boat, weighing less than 1500 lbs., generated over 170 horsepower from twin Rotax marine rotary engines.  The clip showed the boat launching from ramp-like waves and flying through the air.  With its light weight, power and agility and 55 mph top speed, it sounded to me like my Lotus Elan, but for the water.  A bit of research led me to a dealer in Mt. Kisco, New York.  He had three Bombardier jet boats in stock, but only one with the twin engines, and it cost more.  But, he said, it was so quick, there were rumors it might be withdrawn by Bombardier for safety reasons and he wasn’t allowed to order any more.  Maybe it was too fast and dangerous? Either he was a superb salesperson and had me perfectly pegged or I was the biggest sucker born, but in a matter of hours, I was pulling this new boat and trailer into my driveway.  I couldn’t wait to try it out.

Having this boat on the Hudson River north of New York City was a hoot.  Nearly all the boats on the river were far larger. This “rocket ship for the water,” as it was to become known, was a blast to drive. On several occasions we made the 35-mile trip to Manhattan, circling NYC amongst monstrous cruise ships, powerful tug boats and high-speed cigarette-style speedboats. When sitting still or slowly trolling through the water, it looks a bit like a floating hot tub. 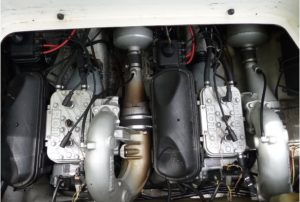 One afternoon, meandering slowly along the city’s west side, I began getting some derisive, NY-style trash talk from a hotshot captain of a 40+ foot, twin outboard engine racing-type boat, I challenged him to a race.  I pointed to the end of a pier about a quarter of a mile down the shore, and suggested we see who could get there first. With several people in his boat egging him on and a host of onlookers, he was eager to shut me up.  We lined up and pointed our respective craft toward the pier, about five football fields away.  Someone on his boat yelled “Go.”  We were off!  As his engines roared to life his props began wild and noisy cavitations, while my two internal engine impellers promptly launched my lightweight little boat out of the water and toward the pier.  We must have been 200 yards beyond the bigger boat before he’d managed to get his ride onto a plane.  His boat weighed at least 10,000 lbs. empty, and he had 5-6 people in it.  It really was no contest, given the short distance.  When I reached the goal-line pier, I did another thing my little speedster was great at, which was to turn on a dime and stop, calmly sitting in the water for 5-6 seconds waiting for the larger boat to come screaming by.  After he’d finally turned around and pulled his boat close to mine, the chagrinned captain and his amused passengers were intrigued. They had tons of questions about my little boat and they passed us over a few beers from their onboard refrigerator. 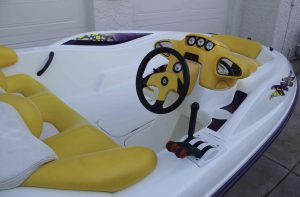 Cockpit of the See-Doo Speedster

I loved my little boat. In my mind, it was indeed much like my Lotus Elan — far faster and better-performing than anyone realized.  Captaining the diminutive craft, I secretly thought of myself as Mario Andretti on the water, capable of out-driving, out-running and flat out putting other boats to shame. One day my daughter Ginger and I were loading the boat onto its trailer at Croton-on-Hudson’s Senasqua Park boat launch.  As I pulled it out of the water with blond-haired, 8-old Ginger in the driver’s seat of the boat, my car window was down. I couldn’t help but hear the excited squeal of a young girl as she ran from the swing sets towards the boat ramp area with her arm outstretched, pointing at our boat and calling “Mommy, look, look, there’s a Barbie boat.” I was shocked. I fumed, “What could she possibly mean? This is a macho screaming high-performance jet boat!”  As I got out of the car to strap the boat to the trailer, I gradually began to see it in a new light.  “Okay, it’s color scheme ‘sort of’ looks like it ‘could’ have come from a collection of Barbie accessories, and it is kind of small.”  Ginger guided the little girl around the boat and with her mother’s blessing, helped her up so she could sit inside it.  She was beyond thrilled and I finally had to laugh.  And from then on, it lost its powerful and dangerous mystique and became “the Barbie boat.” 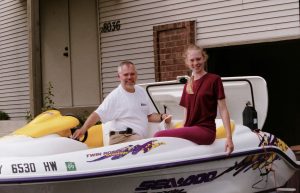 The boat arriving in MN for the first time, Ginger and I trying it out in the driveway.

Moving to Minnesota a few years later turned out to be a boon for the boat.  You may not have heard, but Minnesota has an above-average population of lakes, as does nearby Wisconsin.  The Barbie boat became the ideal cabin accessory for my daughter and her cousins and my in-laws.  They all learned to drive it and parents learned to relax as they realized it had no dangerous props and how much fun the kids were having pulling each other around on inflatable water toys.  The boat was a hit at the annual Net Perceptions family picnic, although I was never able to get our CEO, Steven Snyder into it, but many employees had a great time.

The boat made the trek to Arizona. Pulling it behind our SUV, we were  driving along the Colorado River just east of Moab, UT, when I saw a spot where we could drop the boat into the water and so we did.  It was a beautiful, fun afternoon, although Maggie was nervous about what laws we might be breaking. We enjoyed the Sea-Doo for a few years on the man-made lakes in Arizona, zipping in and out of the water-flooded canyons. But with Ginger gone and her cousins visiting less and less, I finally let it go.  While it morphed in my mind to “the Barbie Boat” many years ago, it is always pleasing to see nautical sites refer to it as one of the greatest boats ever made.

P.S.  You can find the full specs on the boat here.  It’s full name is the Sea-Doo Sportster 4-TEC 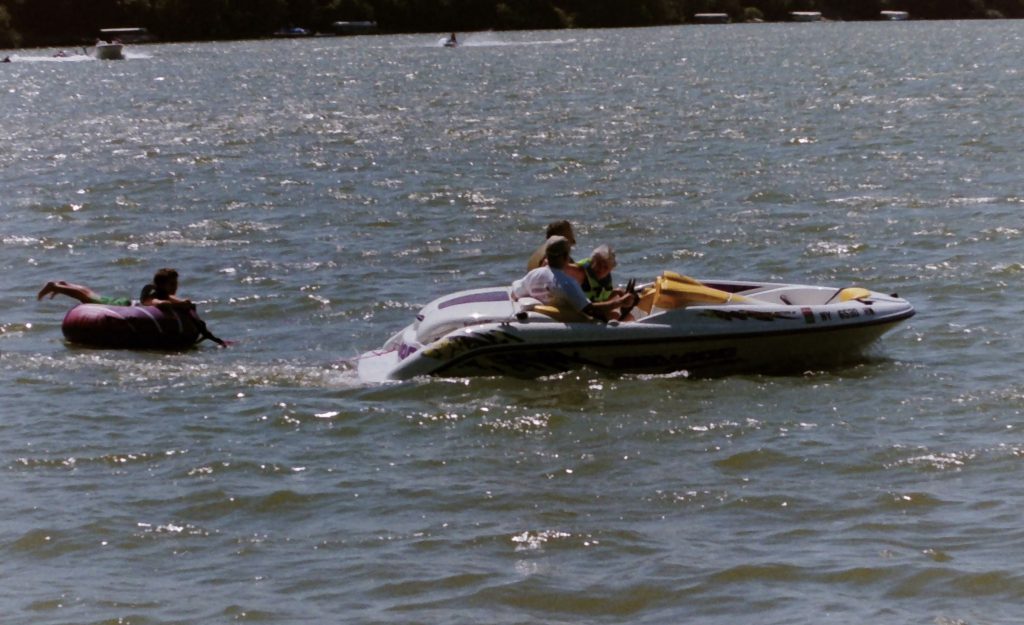 On the lakes in Minnesota, pulling kids on inflatables 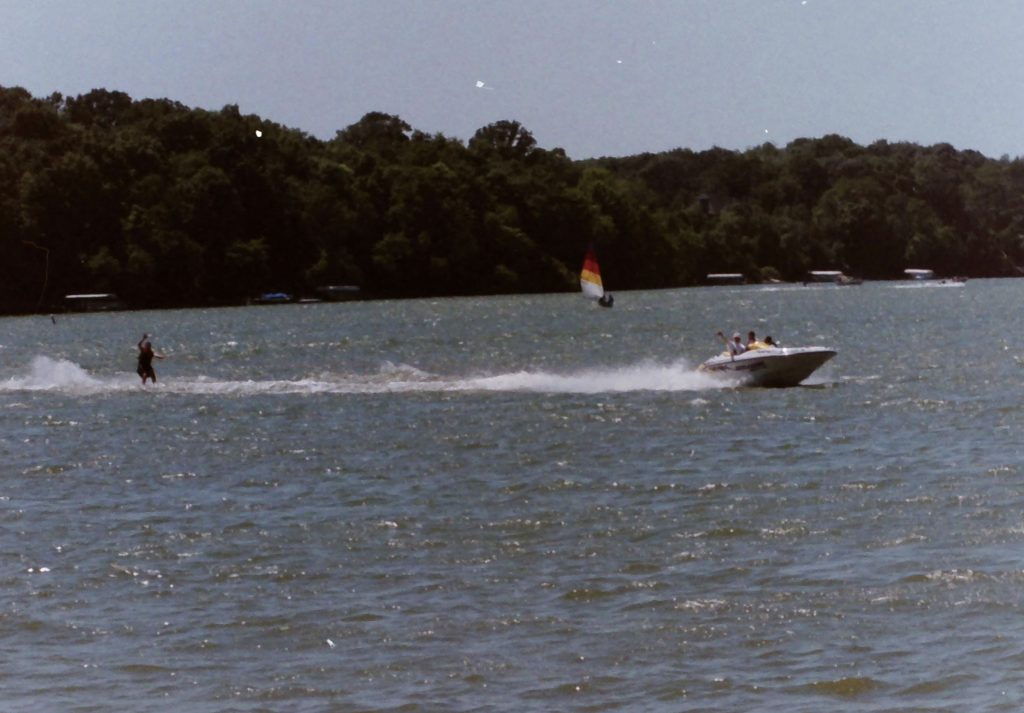 Plenty enough power to pull water skiers, even big ones. 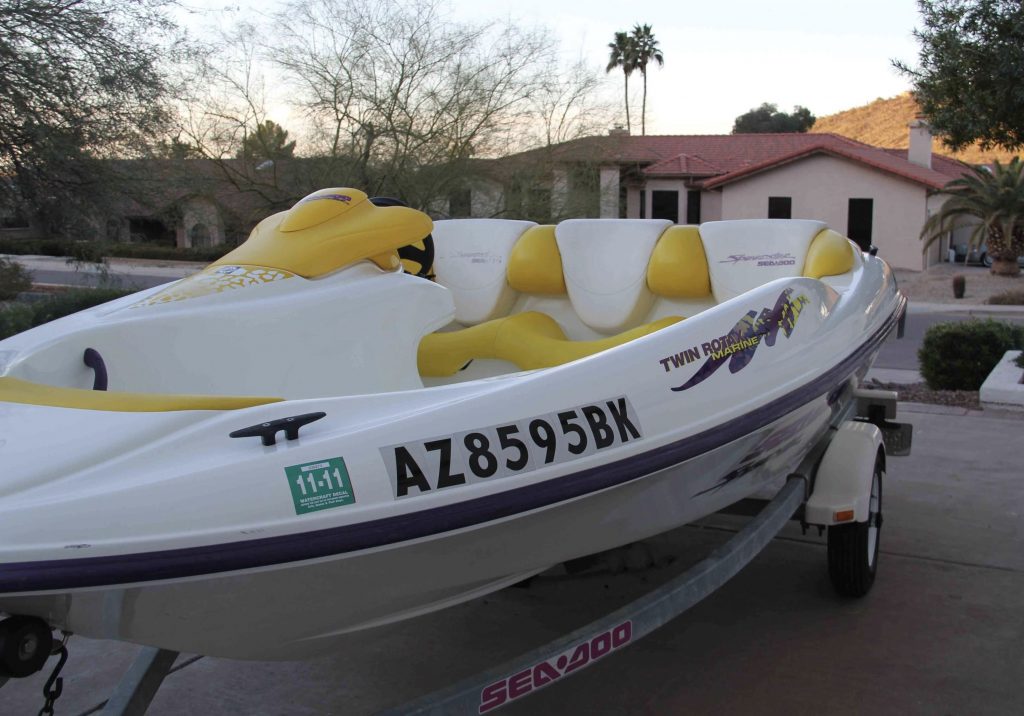 Three across seating keeps you nicely wedged in when doing rapid turns and jumping waves.