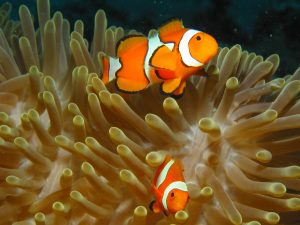 To celebrate our first anniversary, Maggie and I planned a trip to the Florida Keys in March of 1983. As recently certified SCUBA divers, we were looking forward to a two-tank dive in the legendary underwater park near Key Largo, the John Pennekamp Coral Reef State Park.

This park covers over 175 nautical square miles of coral reefs, seagrass beds and mangrove swamps. It was created to protect and preserve part of the only living coral reef in the continental United States. It’s named after John Pennekamp, a Miami newspaper editor, who helped establish the Everglades National Park. While the park has a wide variety of tropical vegetation, shore birds and marine life, what fascinated me was that a good part of the park is underwater. Yes, an underwater state park with a vast amount of coral formations and marine life. As newly minted divers, this area called to us like fresh sugar water in a feeder calls to hummingbirds.

After spending the night in Key Largo, we arrived early the next morning at the dock to meet our dive captain. Sipping coffee and eating from a box of donuts provided from our captain, we learned we were being joined by two guys, students from MIT, who were in Florida for spring break. Loading duffle bags with our masks, snorkel and fins, Maggie took 4 Dramamine tablets, something she routinely did before venturing out on any large bodies of water. While Dramamine failed to negatively affect her, I avoided them as even one tablet would put me to sleep. After making sure we had an adequate number of full air tanks, inspecting the regulators and completing the paperwork, we were off. The captain was alerted to a weather front moving into the area, and depending on its speed, might cut our trip short. As we headed for the dive spot 4-5 miles from shore, we noticed the wave size increasing and the boat being jostled about. At the dive site our captain lowered the anchor into about 30 feet of water, telling us this was a great spot and he’d see us in 40-45 minutes depending on how our air held.

The boat had begun to rock about a good bit, so we were all anxious to get into and under the water, where we expected to be dashed about a bit less. Descending to the ocean floor, our two new friends went off in one direction, Maggie and I in another. After only diving in Minnesota lakes, this experience was wonderful, with coral and lots of colorful fish. While not relaxed underwater, Maggie did remarkably well and before I knew it, it was time to head back to the boat. 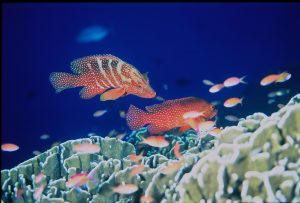 This lack of gravity and ability to move freely in any direction in utter peace and quiet is mesmerizing. Weightless and effortless, divers move through a magical underwater world is magic. We hadn’t gone all that far and I was able to make out the shadow of the boat on the ocean floor 100 yards from us and we slowly swam in that direction. We reached the anchor rope about the same time as our new MIT companions and motioned for them to go up first. Although not all that deep, we still kept to a slow ascent as we’d been trained to prevent possible accumulation of nitrogen which could cause decompression sickness.

We arrived on the surface near the rear of the boat where we knew the ladder was located. While submerged, the wind had picked up a good bit and we noticed we were in 3-4 foot swells. Helping Maggie to the ladder I watched as she attempted to time her climb. It was not easy getting back into this 20-25 foot bouncing dive boat. Imagine you are a rodeo cowboy, attempting to get on (not off) a bucking bronco dancing around the corral. Oh, and by the way, you’re wearing SCUBA gear including flippers. Possible, yes. Easy, no! Inside the boat, the two MIT divers took turns tossing their lunches over the side. Once things had settled down, the boat Captain looked at us and tentatively said, “Well, you all paid for two tanks, and I’ll do whatever you want. Does everyone want to go down again or shall we call it a day? The two MIT guys looked at me, their eyes conveying a desire to quit. Before I could say anything, Maggie exclaimed, “Sure, that was fun, I’ll go down again,” and looked at the three of us with a big smile. In retrospect, swallowing our pride and skipping the second dive would have been the more prudent option. But the gauntlet had been laid down. How could 3 buff (yes, I was buff – sort of – this was 1983!) guys say no? We had no choice; we were doing another dive.

No sooner had we dropped the 30 or so feet to the bottom and our two diving friends had headed off, I had the overwhelming urge to throw up. Remembering my training, I resisted the strong urge to rip my regulator off my face and instead just threw up through my regulator. While not fun, it cleared quickly and I’d suddenly become quite popular with a school of small fish. 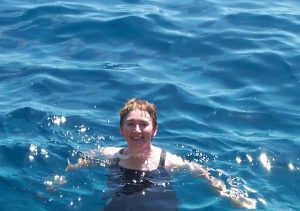 Maggie and I explored as before, me feeling much better after taking care of my stomach. When my air gauge showed a bit under a third of the tank left, I gave the appropriate signal to Maggie that we needed to head back to the boat. However, we had a problem. The sun was no longer shining and no shadows on the bottom. My mental map of the boat’s location was seriously messed up. I looked around hoping to spot an anchor rope. But it was gone. I motioned Maggie to remain on the bottom and I rose to the surface to look around. Turning 360 degrees, I could not spot the boat. Just about to panic, I realized with the high waves, I needed to wait until a swell would lift me high enough to give me a better view around. Using this technique, I finally spotted the boat, although not in the direction I’d expected. As soon as I saw it, I ducked my head underwater and memorized the terrain along the bottom between us and the boat. Submerging back to Maggie, I pointed in the direction we should go, and headed that way. After swimming along for about 5 minutes the anchor rope still had not come into view. So, back to the surface I went. This time, the boat was a good bit closer, but again, not where I expected it to be. Underwater currents were moving us around. This time, as I descended from the surface, I kept my eyes on the anchor rope and even though it faded, I had a good idea of what direction it was in and we headed there. Another 5 minutes and we were at the anchor rope with our air gauges close to empty. At the surface we repeated the climbing onto the bronco exercise now even more difficult as the waves were much higher. I don’t think I’ve ever been happier to be in a boat. Without the other two guys on the boat, Maggie and I quickly got into our dry street clothes. Five, then ten and fifteen minutes went by with our Captain scanning in all directions, but no sign of our two other divers. I began to feel panic for them. Where were they? I knew it had been difficult for us to find the boat given the choppy conditions so it must have been bad for them, too. While this was going on, the Coast Guard was warning on the radio of an impending storm heading right for us and ordering us to shore. Now!

I knew if these guys had been trained properly they were not at super high risk. It was just a matter of surfacing and inflating your buoyancy vest and waiting to be found. But still, I was in shock when the Captain suddenly announced, “I’ve waited long enough, we need to get off the water now,” and pulled up the anchor and started heading for the shore, five miles away.

Sitting in shock, Maggie and I stared at the Captain in disbelief. After about ten minutes, the radio crackled out our captain’s name and call sign. He replied, “Go ahead,” and we heard the following words: “You missing a couple of divers, JJ?” When he replied yes, the guy on the other radio said, “Don’t worry, we’ve got them, see you at the dock.”

Maggie’s never hesitated to support my passion-du-jour, in this case diving. She never learned to relax during SCUBA outings, so her eyes were always as big as pie plates and she used up her oxygen tank faster than I did, but she’d give it a go – every time. In this case, she was better at it than all the rest of us. Of course, she wasn’t handicapped by a male ego! 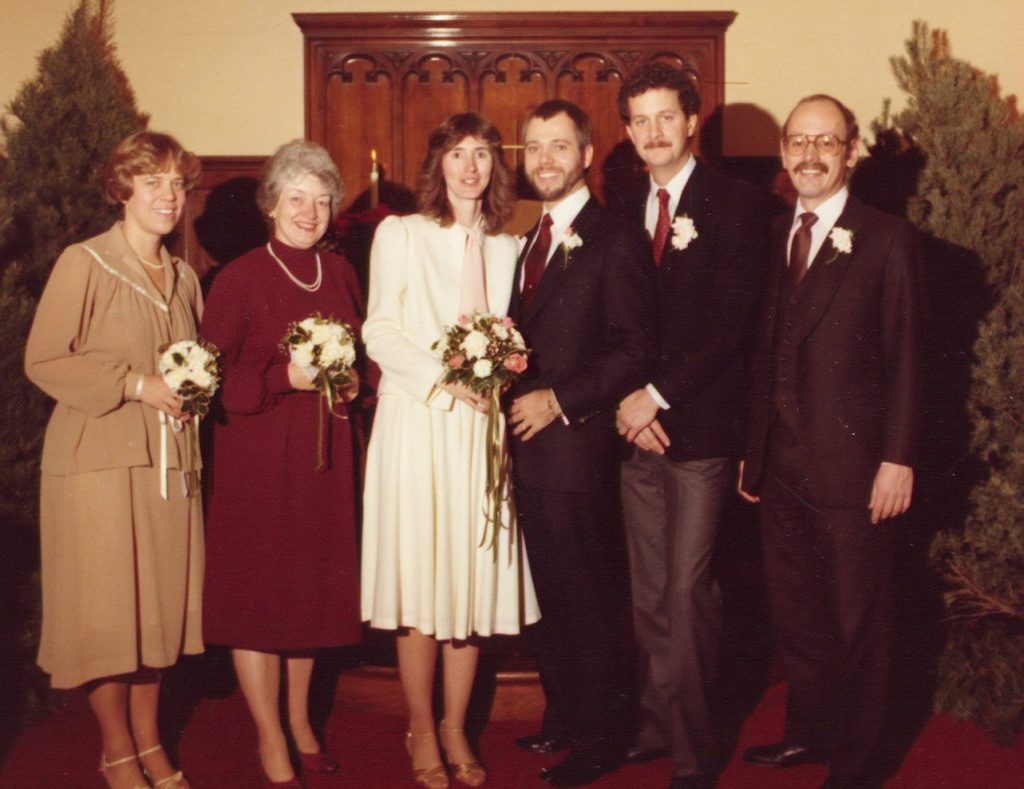 Our wedding photo, just over a year before this adventure. From L to R: Jurene Phaneuf, Connie Morris, Maggie, Steve, Chuk Batko and John Gravley.