No one told me, in my school life grades 1 – 10, I was smart.  It was quite the opposite. No IQ test, just the underlying assumption that, I was “slow.” My mother never gave up on me, but suffered years of my ambivalent disinterest in school, barely passing grades, and non-stop lectures from teachers on my failure to apply myself.  Undiagnosed ADHD may have had something to do with my inability to focus and miserable report cards. 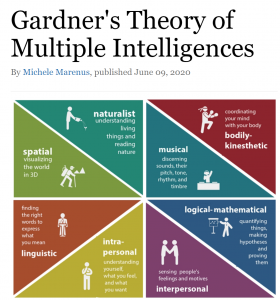 As an adult, I learned about the variety of intelligences we humans possess, mostly through Daniel Goleman’s breakthrough 1995 book, “Emotional Intelligence: Why It Can Matter More Than IQ.” Howard Gardner also did extensive research in this area and I like his eight variations of the intelligence framework. Here’s a  YouTube Video summary of his eight.

I recently found this concept shortened to just four: IQ – Intelligence Quotient, EQ – Emotional Quotient, SQ – Social Quotient, and AQ – Adversity Quotient.  While not mutually exclusive, you have different aptitudes in each area and they’re not static. You can improve, train and cultivate your capabilities in each area. Some of the work is fun and interesting, and sometimes it’s just, well, “work.” Here’s how I think about these categories:

If I had to say just one thing to my grandkids, nieces, and nephews it is this: Don’t only pay attention to what your school knows how to measure.  As you figure out what you are good at and do well and the things you want to do more of, understand your school is mostly about IQ.  They don’t have ways to help you understand and get good at Emotional, Social and Resiliency. You’ll need to figure those out on your own, or with your parents help, like I did.  But it’s worth doing.  I believe these three non-IQ related items hold the keys to success just as much as IQ does, and very likely, much more.