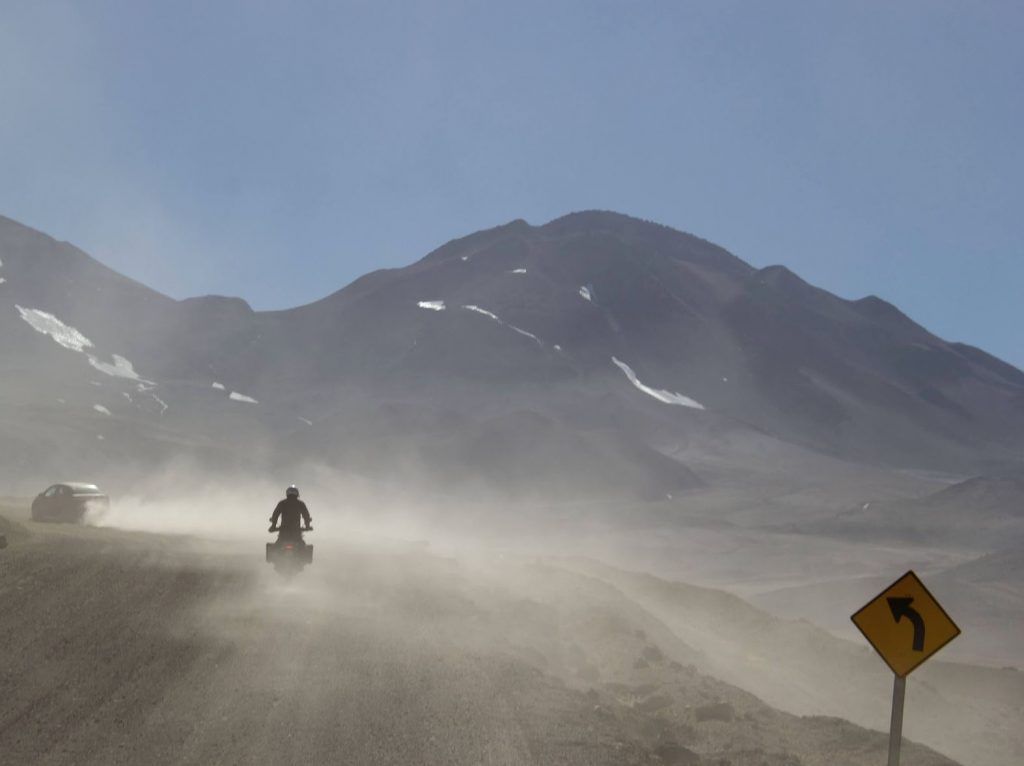 Dust and altitude complicated my crossing of the Andes, although the road surface was decent.

After reading of a harrowing motorcycle adventure tour outside of the US in which several bikes crashed and riders were hurt, I circulated the article to several friends who lead motorcycle tours for a living. The task of assessing someone’s self-reported riding skills before signing them up for a tour is a tough problem for all of them. The discussion ignited several ideas I’ve had on the topic over the years and for the motorcycle riders subscribed to this newsletter, finally something for you.

There is a key concept at work here: it is the tendency of riders to overstate their riding proficiency.  At one training class I attended, the instructor asked attendees to include the number of years we’d been riding in our introductions.  Many were new, reporting their riding experience in months. But some chests puffed with pride as they reeled off 25 or even 30 years, as the newer riders glanced at them in awe.  The instructor then got everyone’s attention by saying, “Most of you who claim 25 or 30 years of riding experience actually have had just one year of riding experience… which you’ve repeated over and over.  Or worse, 25 years of bad habits which will take time and effort to unlearn.” The instructor proved prescient, as that was precisely what we discovered when the lessons began.  Many of the long-term riders were slower to “get it,” and required more repetitions before moving to the next stage of training.

It turns out all humans have this.  It was discovered in 1999 and it’s called the Dunning-Kruger Effect.  It’s a cognitive bias in which people with low ability overestimate that ability.  This illusion of superiority comes from being unable to recognize our own deficiency.  It’s on a scale, so it turns out the worse you are or less you know about something, the higher you tend to rate your understanding or abilities.  (See chart in the blog post version of this story.)  Garrison Keillor captured the feeling well in the closing words of his monologue on A Prairie Home Companion when he said, “Well, that’s the news from Lake Wobegon, where all the women are strong, all the men are good-looking, and all the children are above average.” 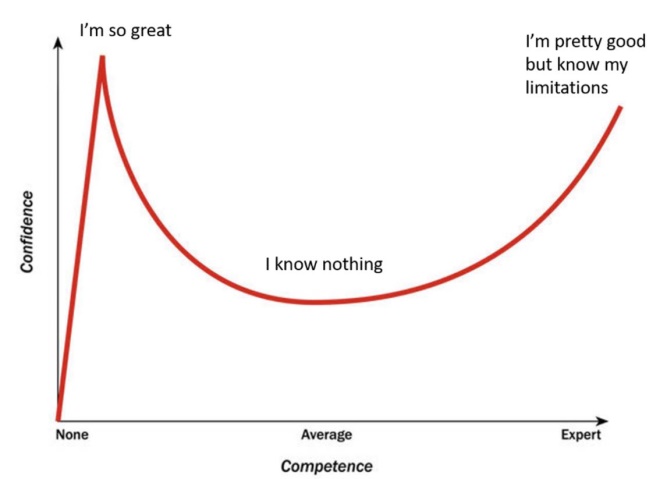 The reverse is true as well.  Once people develop skills or expertise in a particular field, they tend to discover how much they don’t know and gain a better understanding of what they’re unable to do or where the gaps are in their proficiencies.  So, as they pull away from the pack with greater knowledge and ability, they begin rating themselves lower and more critically.  That’s the Dunning-Kruger effect.

Every one of my tour operator friends have methods for dealing with riders who believe they are better than they actually are. They’ve all had guests get in over their heads and it is a recipe for problems that can negatively impact an entire tour, ending up as one operator called it, “in a cluster ride.” Techniques and practices to avoid this varied.  For some, a couple of days of highly supervised training in advance is a requirement for going on the trip.  Jim Hyde of Rawhyde Adventure takes this approach for riders wanting to follow the Dakar event as well as many of his other tours. Tour operator and trainer Bill Dragoo also conducts check-out rides.  An advance “tune-up” ride allows the prospective attendees to brush up on important skills they’ll need to complete the tour while providing the tour operator a chance to evaluate each rider and eliminate them from the tour if their skills aren’t up to the challenges of the ride.

My long-time friend, John Fitzwater of GoTourNZ responded to my email, explaining his process this way: “I have a test route that I take clients who have booked on our “adventure” tours that involves riding on tracks and trails equivalent to Bret’s Difficult Terrain level (Bret Tkacs’ approach will be explained below).  I explain it is a test, and they need to pass the Moderate bits to complete the full adventure tour itinerary (or they’ll have to bypass certain sections).” 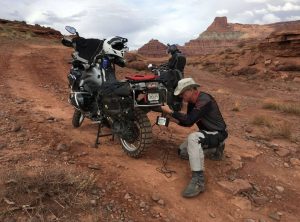 Bill Dragoo airing up a tire.

Bill Dragoo, Internationally Certified BMW Motorrad Off Road Instructor and founder of Dragoo Adventure Rider Training (D.A.R.T.), recommended I look into the new online ADV Skill Rating System developed by Bret Tkacs, operator of PSSOR.  It’s called the Adventure Skill Rating System.   What Tkacs does is ask riders to put themselves into one of three categories:  Rookie, Transitional or Proficient.  His unambiguous criteria for each category makes it easy for a person to identify where they fit best based on frequency of falls or near misses, amount of energy used in a ride, number of breaks or rest stops needed, expectations for bike damage and the ease which you can multitask when needed.  What is especially brilliant and useful about Tkacs’ approach is the next step, when he has you carry this rating over and apply it to five different levels of Terrain (Class 1: Novice Terrain, Class 2: Basic Terrain, Class 3: Moderate Terrain, Class 4: Difficult Terrain and Class 5: Severe Terrain). Helpful videos show examples of all 5 classes of terrain.  Someone who rates him/herself as “Proficient” on Novice or Basic terrain may quickly see they drop to Rookie when the terrain gets to the Difficult or Severe Class.

This approach provides an easily transportable framework for multiple riders to compare skills on an even playing field.  Having potential riders rate themselves, with an understanding someone will be testing them, results in a helpful and accurate self-reported skills assessment.  When Bill and I were talking about it, he felt it would also be useful to help him, as an instructor, guide a student to select the proper class or could be used by riders gathering for a weekend group ride and checking the various riders’ skillsets before deciding which routes to take.  I could see that it may also be useful for riders dedicated to upping their skills by helping them set appropriate and specific objectives. For instance, “My goal for 2021 is to move from transitional to proficient on Class 4 Terrain.” 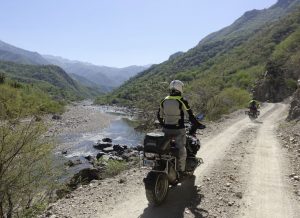 Big bikes at the bottom of the Copper Canyon, Mexico.

Part of what makes this tool so powerful and why it works so well is its limited scope.  It’s not about riding cruiser bikes on the tarmac.  It’s not even about riding 250 cc off-road dirt-oriented bikes.  It is geared exclusively to adventure riding skills on largish (heavy) bikes with luggage on a variety of well-defined terrains escalating in difficulty.   This is appropriate and necessary to maximize the accuracy of a rating to a particular rider.  However, it made me wish Tkacs’ rubric could be implemented for ranking prospective riders if the terrain was going to be all tarmac and the bikes were sport-touring types, or for sport bike track day classes, heavyweight cruisers or super heavy luxury touring bikes. 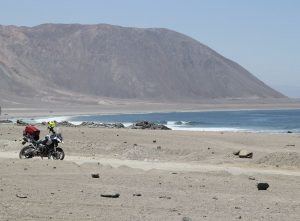 Arriving at the ocean in Chile after crossing the Atacama Desert.

Another aspect that impressed me in Tkacs’ method is how he includes fatigue and length of time on the bike with the terrain calculation.  In my “Chasing Dakar” assignment for The Overland Journal several years ago, I learned 175 miles of tricky dirt roads, deep sand, and heavy dust at high altitudes made the next stage which consisted of 300 miles of high-speed tarmac riding more treacherous because the fatigue factor now began playing such a more significant role.

While my first thought was that 3 categories weren’t enough, the more I read and thought about it, the more value I saw in Tkacs having just 3 groups.  Although there are only 3 categories, there is enough flexibility within the groups to further define skill levels.  For instance, one could say, “I’m transitional to proficient early in the day when fresh, but deteriorate to rookie late in the afternoon, especially after a big lunch and no nap. Oh, and at over 10,000 feet altitude, I’m all-rookie all-the-time.”

Riders who know me and have read my magazine articles over the years are aware of what a big believer I am in training.  I used my associations with RIDER, Motorcycle Consumer News, RoadRunner, and other magazines to report on a whole host of wonderful training schools, including several courses created for and limited to full-time, professional riders.  There are links to some of the best of those articles here.  For the largest portion of my riding life, I began every year with a new riding skill or training goal to accomplish during the next year. I tried to make them big deals taking considerable effort to accomplish. I don’t remember missing any of them, although sometimes they took a bit longer than a year to reach. 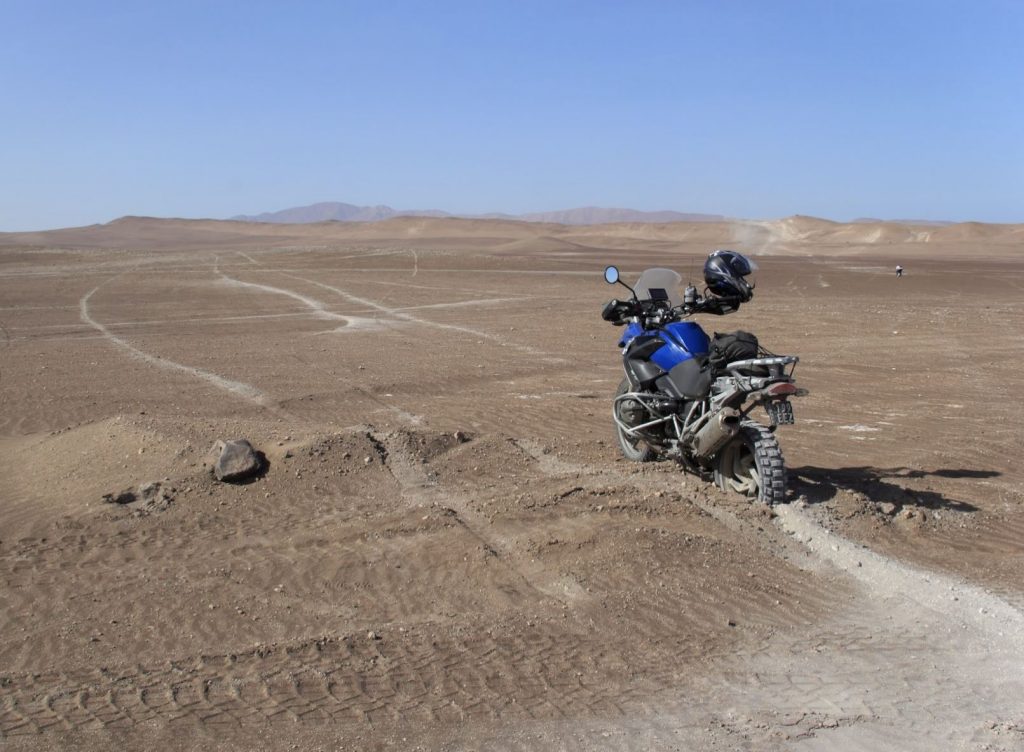 My BMW 1200GS in an Argentina desert. It was easier to spin the rear tire to make a groove to hold the bike upright than using a side stand. 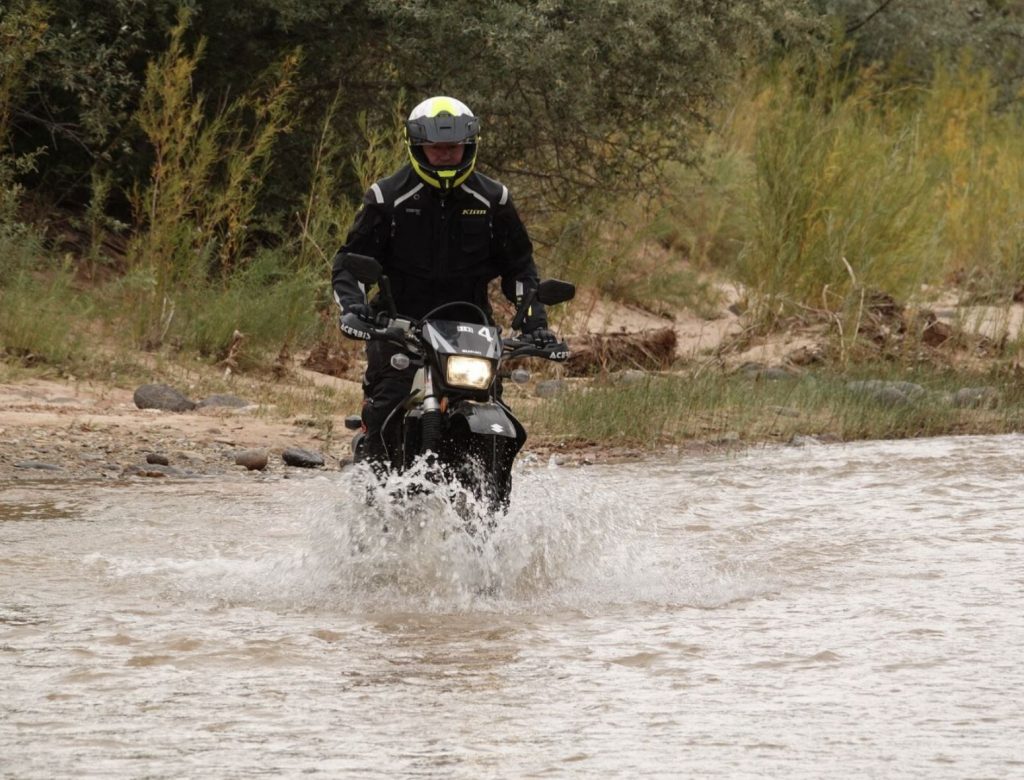 Crossing a river isn’t difficult if the bottom is only small rocks, it’s not too deep and the current is slow. Otherwise, it can get dicey. After crossing on my GS, I rode another rider’s bike across for her. 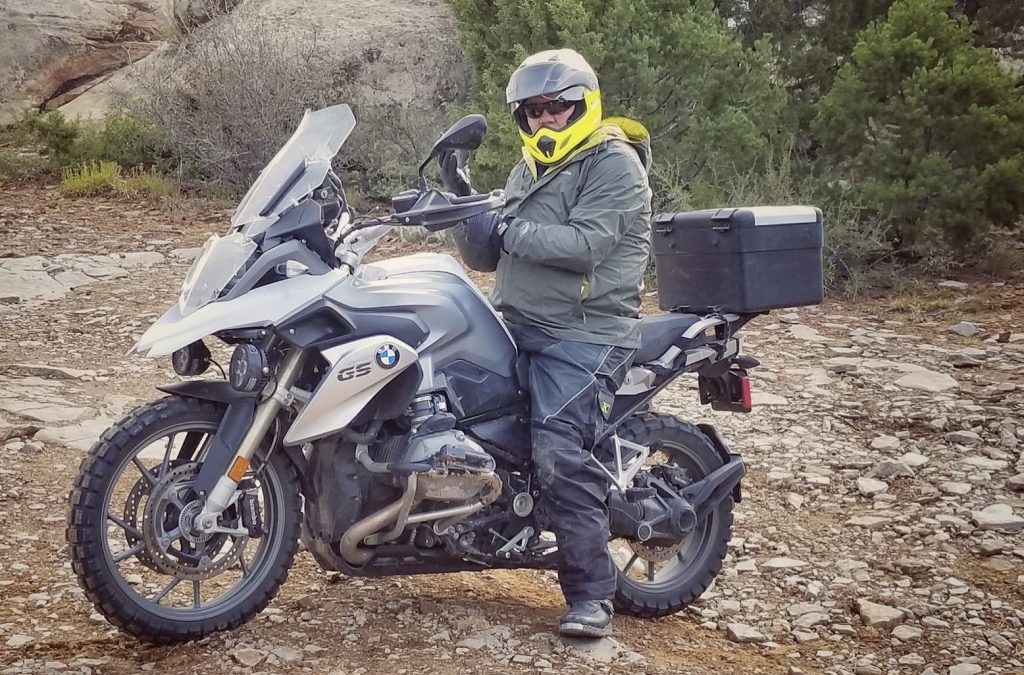 Taking the big GS out to find the best lookout spots can sometimes involve sketchy terrain. This picture is from a south Utah ride. Notice, I’ve put the knobby tires on my GS. 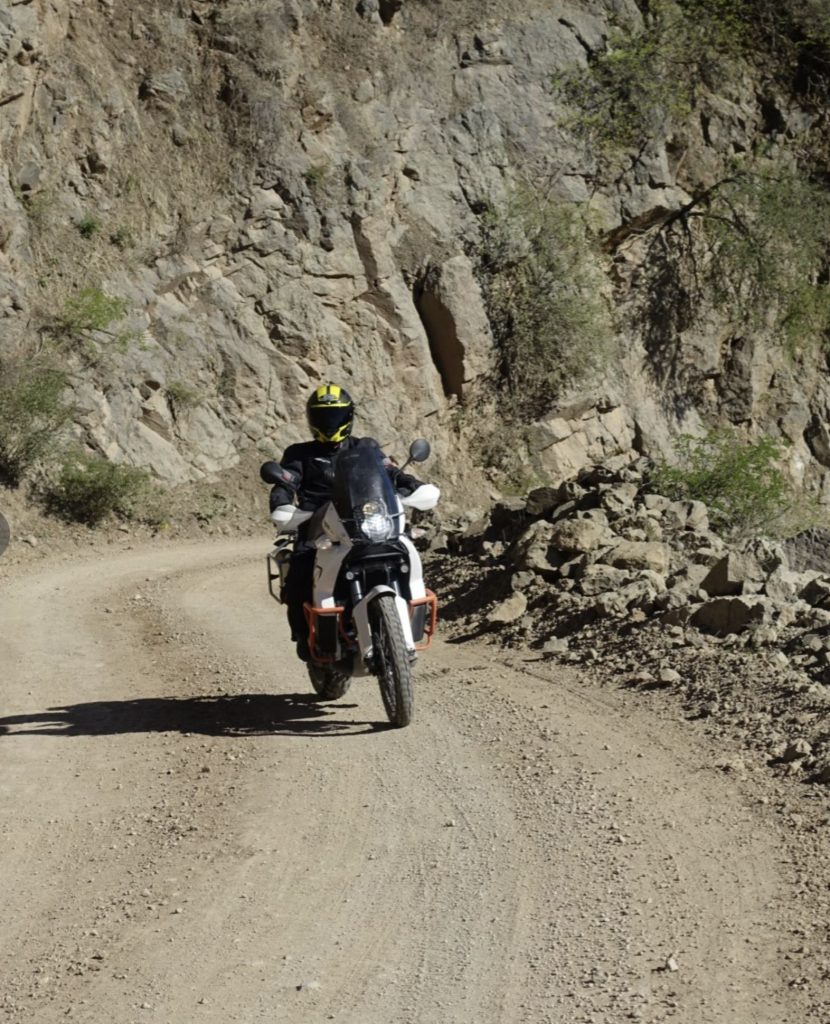 Roads down into and out of the Copper Canyon in Mexico were not difficult. But hours and hours of riding switchback after switchback cause fatigue.