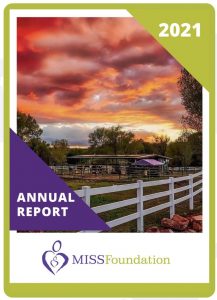 Do you know someone who’s experienced the loss of a child, grandchild, parent or sibling? Allow me to point you/them to the MISS Foundation, a wonderful group, brilliantly led by Dr. Joanne Cacciatore. This group is like a down comforter for people caught in a cold, dark room of grief. Here is how I met Dr. Jo  — what her friends call her.

Ten years ago I was standing in line at the Starbucks on the corner of 7th Street and Thunderbird. Cacciatore was in line ahead of me.  I couldn’t stop staring at the tattoo lettering across her back. It was a script, a poem, or maybe a song lyric, I couldn’t tell.  But I knew there was a story there. After we’d ordered and she waited for her drink, I got enough courage and approached her, saying, “Wow! That is some interesting artwork on your back.” I watched her size me up, making an assessment and then a decision on how to respond. She looked directly into my eyes and said. “It is a poem from St. John called The Dark Night of the Soul. It was applied with ink mixed with the ashes of my dead daughter.”  I paused, stunned, and as we stared at each other, I teared up and mumbled, “Oh. I know something about what you feel. I lost my son.” Neither of us said anymore. I tried to talk, but couldn’t.  I was so choked up.  She got her coffee and left the shop.

Later she would write of this connection on Facebook. Someone saw it, thought it sounded like me, and pointed me to it.  We ended up corresponding and soon became friends.  Cacciatore went on to complete her doctoral thesis on the heartbreak experienced by parents who’ve lost a child and the best methods for dealing with this level of grief.  She started a non-profit foundation called The MISS Foundation. Last year she published a book on grief which has become a best seller on Amazon.com titled “Bearing the Unbearable: Love, Loss, and the Heartbreaking Path of Grief.”

I’m now on the board of the MISS Foundation.    Here is their 2021 Annual Report, a year in which the organization made extraordinary progress, including coverage by Oprah and Prince Harry’s television series. Others do so much more than I do to help, but I love these people and what they do.  If there are angels on earth, they are here, in this organization.