Keep it, trade it or sell it? 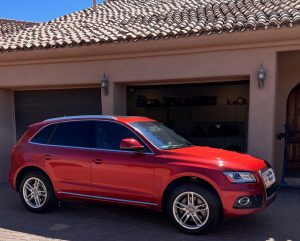 When our 2014 Audi Q5 passed 75,000 miles, (it has now surpassed 100,000), I began to get nervous.  On the one hand, the warranty was gone, so repair costs would fall on us. On the other hand, this had been one of the best cars we ever owned.  We purchased it in 2014, buying into the whole “clean, efficient, diesel” theme being hyped by Audi and Volkswagen.  Later our Q5 would get caught up in VW’s “diesel-gate” scandal; it minimally affected us or the car’s performance, other than about a year when letters with checks and apologies from Volkswagen, who owns Audi, filled our mailbox. 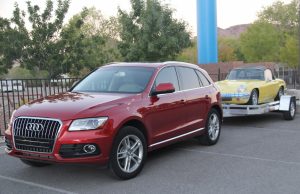 The Q5 happily pulled my other vehicles around. Here it is on a trip to a Lotus meet in Colorado.

The car performed admirably, to say the least. Its relatively low horsepower (240 HP) was offset by over 425-foot lbs. of torque. As Jay Leno once said, “Horsepower sells cars, but torque wins races.” Besides being spunky off the line, pulling a trailer loaded with my 4-passenger Polaris RZR, spares, tools, four adults and gear up Highway 17 from Phoenix into the higher elevations was a walk in the park for the Audi.  I used to laugh as we easily passed large, roaring and belching pickup trucks, gasping due to the long, steady climb.  On top of that, it was exceptionally efficient.   Filling the tank, we loved seeing the “miles remaining” indicator show 585 or more miles.  Sure, the Audi had an extra-large tank, but the number would not change for the first hour or so after we left the gas station, and only then would it gradually begin coming down. Audi claimed 32 MPG and our experience was it may have been better than that.  The 8-speed automatic transmission was tuned for efficiency and it delivered.  Nevertheless, no matter how much we love a car; there is a time to let it go.  How do we recognize that time? Should we keep it, trade it in or sell it?  When we got close to 90,000 miles I knew we were living on borrowed time and a year later I was proven right.

Fears about costly repairs on higher mileage German cars were pooh-poohed by several car expert buddies. They would nod sagely and say something like; “Diesel cars easily go 275,000 miles or more. Hell, at 100,000 it’s just getting broke in.” Still, I worried. We’ve had experience with several new cars over the years.  In most cases, we viewed their passing the 50,000 mile warranty period as the time to begin thinking about letting them go.  Many people take an opposite approach, thinking something like:  “Now that the $313.40 monthly car payment is gone, we’ll set that money aside in a special account for car repairs.  In the long run, we’ll be better off.”  I think that only works in theory. 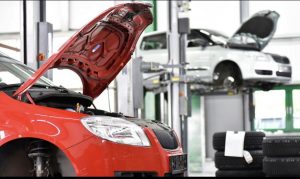 Kelly Blue Book indicated the trade-in value at about $13,500.  With the $3K already spent on the front bushings and another $2K for motor mounts I’ve got $5K into it and I’ve yet to address the coolant issue (potentially $3K but not urgent – it’s easy to add coolant and the leak is slow).  Plus it will need tires, another $1500 unless I buy some cheapies.  So, it could run over $8,000 and possibly more.

Bottom line, I’ll never again recommend the “keep and repair it” approach, especially once you’ve exceeded the warranty by 15-20,000 miles.  Perhaps, if you’re mechanically inclined and can do your own repairs, it might make sense.  However, given the complexities of newer cars, I suspect that direction is fraught with pitfalls as well. I’m curious as to what others think about this and your experience. Let me know in the comments section below.

3 Responses to Keep it, trade it or sell it?