Innovation of the Month 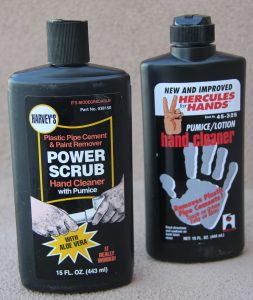 First off, adding a sink to one’s garage has a fast payback. No kidding – one of the most useful garage upgrades you’ll ever make – I promise. While admiring the newly installed stainless steel sink with John Donhauser, my “do-it-right-the-first-time-plumber” and maybe the best pipe wrangler in all Phoenix, if not the world, something didn’t seem entirely right to him. He looked at the hand cleaning products assembled on the shelf above the sink. Moving the giant tub of Fast Orange aside and pushing away a plastic bottle of Gojo, he harrumphed and went to his truck, returning shortly with a 15 oz. plastic bottle of William H Harvey’s Power Scrub Hand Cleaner. “Try this,” John said, “it works twice as good as all your wussy stuff.” On first try, my impression was it sure worked fast. Just a little bit of rubbing and my hands seemed totally clean. John let me keep the bottle after I paid him for the plumbing.

Over the next few weeks I began comparing it to my other hand cleaners and came to believe that it indeed was superior, perhaps dramatically so. Sure, the others had pumice, too, but the Harvey’s just worked a lot better and faster. After decades of using just about every cleaning concoction you’ll ever find around a garage, commercial or private, it takes more than a minor improvement to impress me.

In 1944, Master Plumber William H. Harvey Sr. invented the first pre-formed wax gasket for setting toilet bowls, and launched his company in Omaha, Nebraska. Since then, more than 3,500 Harvey-brand plumbing products have made their way into existence. Old man Harvey is long dead but his brand is still going strong. Late in 2006, William H. Harvey Manufacturing Co. began operating as a subsidiary of Oatey Company

Josh Funk, the guy managing Harvey products at Oatey, told me the reason Harvey’s cleans so quickly and thoroughly is because it was formulated to remove plumbing pipe cements and the glues plumbers use to join ABS, PVC and CPVC pipes. While it uses soap and pumice to go after normal grease, grit and grime, it’s those special solvents that go after sealants and varnish that provide the extra edge. It makes sense. Given the company specializes in making cements, primers, thread sealants, gasket materials, epoxy and plumber’s putty, they better know how to make a hand cleaner that gets all that stuff off your hands once you’re done working with it

I tried getting my hands dirty with things I normally wear gloves to handle – varnish, urethane paint, Fiberglas resin (which is just the worst) and a variety of adhesives including Plast-aid and JB Weld. A few squirts of the light grey liquid and bingo, hands clean – much easier than standard cleaners. Of course, the general garage grease, grime and oil that accumulates on your hands after a few hours of working on a motorcycle is a walk in the park for this stuff. My buddy, Mike McAuley stopped by while I was testing, with his hands and arms full of paint from a job he’d just left. I asked him to try the Harvey’s and let me know what he thought. “I’d buy this,” Mike said. “It works as well as paint thinner and isn’t as harsh.”
Harvey’s has a pleasant apple-like smell without any perfume-type odor. It contains Aloe Vera to help heal and condition skin. Funk told me the product is far safer than using solvents or thinners to cut through these cements and it is totally nontoxic and biodegradable – safe for humans and drains.

I was unable to find it at Home Depot, Lowes or my favorite ACE Hardware. However, they sell it at my local plumbing supply store and you might find it at yours as well. It’s also available online from specialty plumbing supply places like KSC Direct.com (cases only), Automotive-parts.com, hardwareandtools.com and amazon.com. Funk told me a nearly identical product from Oatey with the Hercules brand is much easier to find. The chemical formulas on paper look nearly identical and while I did not do as much testing on the Hercules bottle, it seems pretty much the same, although it smells a bit different – sort of minty.

While the price isn’t bad, $7 – $9 online, shipping costs vary from $4 to as high as $7. Although, shipping costs did not increase when ordering 3 or 4, which is not a bad idea. Every time a friend comes over and tries it, I end up giving away a bottle.