Health Issues (Part 2 of 3): Yes, they operated on kids back then. 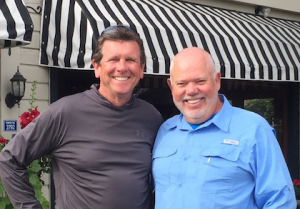 In New Zealand with my friend, Steve Pittendrigh, early 2016. It was on this trip I noticed being out of breath when hiking.

Face it, at my age (69), a primary topic of conversation with friends relates to health and our various ailments. When younger, this drove me nuts. I swore to never indulge this sort of behavior.  But that was before I had health issues to trump nearly everyone elses.

My 1965 open-heart surgery, at just short of 16 years of age was a success. The constriction was fixed, holes were found and sewed shut and over the next few years, my body came back into line. I had been the beneficiary of a massive amount of medical progress in open-heart surgery during the late 1950s and early ’60s.

A brief history of open-heart surgery (feel free to skip the next 3 paragraphs):

Until the mid-1950’s most pediatric heart operations were on or around a closed, beating heart. The challenge was to stop and restart the heart and operate safely inside it. Early on, hypothermia was the preferred method to interrupt blood flow during intracardiac operations, but it had to be fast and there were complications. In 1953 they begin testing various sorts of cardio bypass technics, with a roughly 25% survival rate. At the time, this was good and motivated others. Early by-pass approaches were done on children with a parent serving as an oxygenator, cross-circulating the parent’s arterial blood into the recipient. This lead to the belief that a temporary cardio bypass might be feasible and work to find a suitable pump and mechanical oxygenator was on.

The world’s first successful open-heart procedure was carried out at the University of Minnesota hospital in 1952. Using the technique of hypothermia and inflow occlusion, Dr. John Lewis did open repairs of atrial septal defects without severe complications in about 20 patients in 1952 and 1953. This, along my aortic constriction, was a key element of the operation they would do on me.

The University of Minnesota heart hospital was a leader in advanced cardiovascular surgery. From 1950 to 1967 an incredible amount of innovation occurred. This was due to, 1) having a unique and privately funded 80-bed heart hospital (the Variety Club Heart Hospital), where I had my surgery; and 2) the Department of Surgery was chaired by Owen Wangensteen, MD, a leader who created the environment for great achievement and considered the “mentor of a thousand surgeons.” My surgeon, Dr. Aldo R. Castaneda, MD was a student of Dr. Wangensteen and went to become president of The American Association for Thoracic Surgery.

Surgeons believe once they fix something, it stays fixed. So, after my five-year follow-up, they sent me on my way. Then in 1995 at 44 years old, I got a call asking me to participate in a follow-up study of patients who had had aorta repairs at the U of M between 1950-1970. Retrospective studies indicated individuals having these operations, had a greater incidence of hypertension, premature coronary artery disease, stroke, aortic valve abnormalities and dilatation of the aorta and bicuspid values. Could they check me out? After two days of exams and tests, they told me I had 3 of the 4 problem areas. I was put on a mild medications and told my heart would need a valve job when I reached my sixties, and to check with a cardiologist every few years to measure my progress. 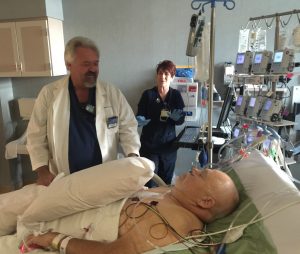 My friend, Dr. Draz, visiting me in the recovery room.

In January of 2016, on a motorcycle trip in New Zealand which involved hiking, the alarm bells went off when I was unable to keep up — a total shock. Even in questionable physical shape, I was always able to keep pace with pretty much anyone. But not now. Back in the US, my cardiologist suggested it might be time to visit a surgeon, cautioning me, “Now don’t go to the appointment if you’re not prepared for the surgery. They’re surgeons and they’ll want to cut. It’s what they do.” The next month I met with Dr. Patrick DeValaria, a surgeon at the Mayo Clinic in Phoenix who did, indeed, want to cut. And on April 13, 2016, he replaced my bicuspid aortic valve with a bovine/carbon fiber model and also replaced my ascending aorta with an artificial one – something that looked sort of like a small vacuum cleaner hose but was guaranteed to never break or stretch. I was out of bed the day after the surgery and soon making laps around the nurse’s station. Released to go home after five days, I felt pretty good and couldn’t wait to start my cardiac rehabilitation program – which I sailed through. Everything was great, and Maggie and I made plans to take an extended cruise on Holland America to celebrate.

But then the weirdness began.