Finding a Daughter on 23andMe – the rest of the story 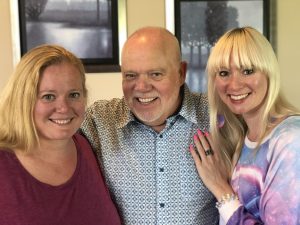 My very first newsletter (9 newsletters ago) was the story of finding a daughter I did not know about.  She found me using 23andMe, reached out and made contact.  If you missed that newsletter, you should read it.  You will find it here:  No doubt several of you have imagined what would have happened if this had occurred in your family, no?

Response to this story from family and friends has been quite heart warming. Some responses contained questions.  This newsletter answers some of those questions and provides a bit more background.

Why did you do 23andMe to begin with?  In April of 2016 I was scheduled for Open Heart Surgery (OHS) at Mayo Hospital in Phoenix. As part of my preparation and desire to leave no stone un-turned in my search for things which could impact the outcome of my surgery, I joined 23andMe and had my DNA tested. Although a fascinating report on the history of my ancestors full of curious bits such as: “You can smell asparagus in urine,” and; “your belly-button is an ‘inny’ and your second toe is longer than your big toe;” it revealed no relevant tidbits about my heart situation and nothing to help in my upcoming surgery.  23andMe did ask if I wished to make my DNA results public.  Remembering my friend Ester Dyson’s eloquent articulation of the value of making one’s results public years before, I checked the box to make my results known.  Not finding the health data I’d hoped for, I soon forgot about 23andMe and only returned infrequently in the following months to complete a survey or two.

Two years later in Minnesota, when Christina Will took her DNA test in the fall of 2018, she did not expect much. But her search was not health related  Her support team of birth-father-searching-sleuths (BFSS) urged her to take the test with the idea of finding a second or third cousin somewhere, and those cousins might provide clues to aid their search for a possible birth-father for Christie.  When she opened the email from 23andMe on Christmas morning of 2018 and saw the report, she was shocked.  There it was in black & white – a 50.0% DNA shared match with someone named Steve Larsen – the other half coming from her mother. You can’t get a more definitive statement of parentage.    Over the next few weeks, Christie didn’t understand why I didn’t reach out to her?  There were the results as plain as day, right on the 23andMe website! And yet, I’d not contacted her.  What Christie did not know was I’d never gone back to the site after the first few month’s novelty had worn off. I was completely unaware we’d been matched in such a definitive way. Of course, since this has happened, I’ve spent a lot more time on 23andMe, and have found the information rather astounding.  It is something I recommend everyone do – https://www.23andme.com/.

Impact on our family: The biggest impact, almost from the start and most certainly for the long-term, is on Ginger (and Christie, of course).  At eight years of age, Ginger’s brother – and our son, Eric, died.  Eric was two years old.  While a very successful and well-adjusted adult, Ginger has never been able to fill the hole in her heart left by Eric’s passing.  It was devastating for her then, and it took many years for her to work through these exceptionally painful memories.  And they still affect her. Having a sibling – a genuine big sister who’s not only intelligent, witty and cleverly diabolical in a wonderful way – is changing Ginger’s life, even before throwing in the two beautiful nieces.  Ginger is growing to love her “new” sister. She adores and dotes on her nieces. Something is emerging in Ginger I’ve never seen before. It is truly wonderful to watch.

Maggie has been as welcoming and supportive of her new step-daughter as one could possibly imagine. I kid her this was only after she’d “done the math,” confirming my relationship with Christie’s mother was several years before she and I had met.  But in truth, this was never the case.  Maggie is thrilled to add another daughter to the family and just as exciting, two grandchildren!  Now if she can stop me referring to her as the “wicked step-mother,” she’ll be happy.

For me, it’s a near-constant dazzle of complex emotions. Incredible joy at all I’m learning from this remarkable woman who is my daughter. The extraordinary gifts she brings, such as her astounding husband and two incredible young girls – who are my granddaughters.  Sadness too, as I realize how much I’ve lost in not knowing and being part of their lives sooner than this.

A most remarkable coincidence:  In our early correspondences, Christie pointed out the uncanny resemblance between her youngest daughter, Parker, and pictures of Ginger when she was a kid.  Truthfully, they look like they could be twins.  Maybe I can set up a quiz?

Here is one of my favorite stories in all this:  In one of the first visits Maggie, Ginger and I made to the Will household, Ginger brought along printouts of a dozen or so photos of her as a young girl.  Showing us the pictures, we all were amazed at how much Ginger as a child looked like the current Parker. Christie’s husband, Jeff, had not been in the house when these pictures were revealed and fawned over. When he came in later, they were stacked on one corner of the kitchen table.  I watched from the living room as entered the kitchen and picked up the stack of photos and started looking through them. After examining 4 or 5, he turned to Christie and said, “Honey, where are these pictures from? I don’t remember seeing these.” Christie turned to Jeff, saw what he was looking at, and grinned.  “That’s because they’re not Parker, Jeff.  Those are pictures of Ginger.” He couldn’t believe it.  He had thought he was looking at photos of his daughter. Below are some photos of Parker Will and Ginger Larsen. See what I mean? 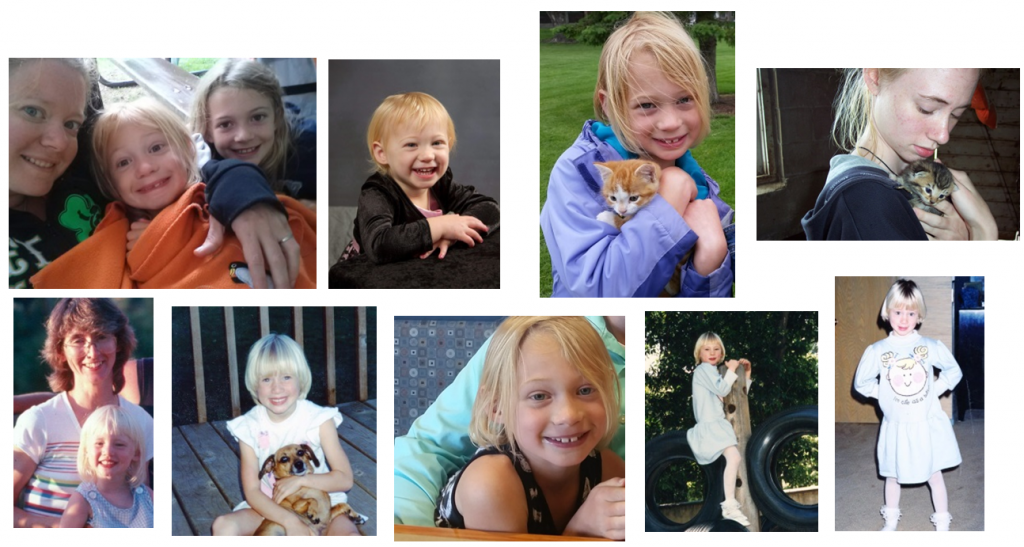 Being abandoned:  When Christie was a teenager she discovered her birth certificate with the father field filled in “unknown.” She began to develop the feeling she’d been abandoned by her birth father, he didn’t want her. Her mother had never spoken of this mystery man or named him to anyone.  Around the time her mother died, messages to the suspected birth father were met with denials, leading to stories fueling Christie’s feelings of being unwanted.  It was only after discovering who her actual birth-father was years later, that it became apparent the messages to prospective birth fathers had gone to the wrong person. Christie speaks about this in her father’s day sermon and if you’ve not watched it, I recommend you do.  You can find it here:   This is a complex and strong emotion. It can’t have had a positive impact on Christie as she grew up and I have no idea how she’ll change knowing this major part of her history has been wrong. I wish there was some way I could fix this for her.

Making up for lost time: A frequent question is, “Well, after you met them, have you seen them again?” So far our two families seem to be on precisely the same page about this topic.  We can’t get enough of each other.  Maggie and I traveled to Minnesota for 6 weeks in the summer of 2019, hanging out and inventing excuses to visit our new daughter and grandkids.  We had a grand time.  Then in the fall, Christie and the girls spend the long Thanksgiving Day weekend here in Phoenix.  And the Thanksgiving pilgrimage turned out to be only a scouting party, as over Christmas the entire family, including Jeff, came down the day after Christmas and stayed nine days until Jan. 3rd.  We are having just an awesome time getting to know each other.  The Coronavirus just wrecked a week-long visit here in April, but we’ve got our fingers crossed our summer plans will remain intact.