Ethics Class Part 2: How it went 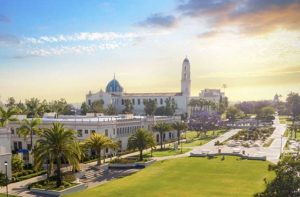 My nerves were on edge as I took the wheel of Rich Marin’s Tesla Model X. We were driving from his Escondido hilltop home to old town San Diego for an early dinner. The car wasn’t what was worrying me. My issue was about after dinner when we would drive to the University of San Diego campus and I would guest lecture in Rich’s graduate class on Law, Policy, and Ethics. Agreeing to speak in his class a month before meant choosing a case to study (I chose Theranos), doing the research, and structuring the two-hour class to allow the key ethical considerations to emerge. I also wanted to impart a few invaluable nuggets from my years in business.

My nervousness was mostly due to typical public speaking jitters and so many unknowns – what does the classroom look like, how will the audio/video work, will we arrive early enough or be rushed, how will the audience behave? Knowing myself, nervousness rarely helps bring out my best.  As we rode, I told myself: “You’ve got this; these situations typically go well for you, you’ve done your homework, now just relax and have fun. Things will all work out.”  Slowly I relaxed and by the time we found the classroom, my frame of mind was where it needed to be.

My preparations had involved reading about half a dozen books  and watching the movie. It is the one I mentioned in The Ethics Class Part 1 newsletter and, Rich assigned to the class as preliminary work. The movie, “The Inventor: Out for Blood in Silicon Valley”  was done in 2019, about two years after Theranos ran into all its trouble, but before Holmes and Balwani were indicted for fraud.  It is terrific and I recommend this documentary.  I also found a link to a video deposition Holmes did in 2017. This was revealing as I was able to hear Homes directly contradict, under oath, nearly all of the claims she’d made about Theranos and its technology. 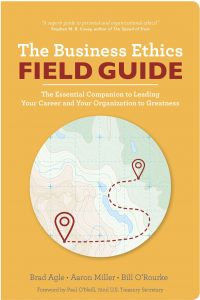 In addition, one of the subscribers to this newsletter and a good friend, recommended “The Business Ethics Field Guide,” by Brad Agle, Aaron Miller, and Bill O’Rourke. It bypasses all the often boring “why’s” regarding ethics and focused instead on the how’s, creating 13 categories of ethical dilemmas, real-life stories for each situation and a basis for analysis and signposts for finding your way through each of them.

While practicing my presentation with Maggie, she gave me another example, closer to home than I had realized.  Some years ago, while editing a manual for the documentation company where she worked, she found a part number had been entered incorrectly.  She corrected it and sent the document back to the writer on the project. The next day she noticed he’d rejected her correction, forwarding it to the client uncorrected, with the wrong part number.  Confronting him on why he’d not taken her correction, he said it was a matter of “malicious obedience,” justifying his action by saying he’d been instructed, in no uncertain terms, to never make changes to an engineer’s mark-up.  He’d been told technical writers were not to second guess engineers – ever.  Maggie was furious and reported the incident up the chain of command and assumed the manual would be corrected prior to publication.  She was incensed when she later discovered it was not.  Should she contact the client directly and smear her company’s reputation or not? Choosing to be (or not to be) a whistle-blower is a very tough choice.

On the day before the class, Rich told me more about how this single class on business ethics fit into the storyline for the full course, Law, Policy & Ethics.  If you’ve not guessed, legal choices can be unethical and vice versa and policy can go either way as well.  The course will touch on not only ethics but impacts that need to be considered for stakeholders, which include shareholders and creditors, employees and consumers as well as suppliers and competitors. Arbitrage, markets & ethics get a deep dive as do a look at ESG (Environmental, Social and Governance, including anti-discrimination and socioeconomic investing).  He’ll end the class with a look at some of the fundamental concepts in business ethics, individual liberty vs. the common good, and how that affects capitalism, public policy, and civil society.  I hope Rich will be able to get me Zoom access so I can audit the entire course.

You can read Rich’s summary and impressions near the end of his recent newsletter here.  My favorite comment from Rich was this: “In twelve years of teaching I have never seen so much student engagement as we had during this debate.” My assessment is completely the same as Rich’s, although with a twist. My best college teaching experiences were always with highly engaged students.  For Wednesday’s class, I tried two approaches I’d used in the past to help move things in that direction.  The first was before the class began.  As students filed in I spoke to as many as I could. I asked where they worked, why they’d decided to enroll in this program, and what it was like taking classes at night while trying to hold down a job. Rich watched me as if he thought I was running for mayor.  The second step was to begin my presentation with an anecdote to subtly communicate it was okay to speak up, and their thoughts and ideas would be welcome. The above, combined with a contemporary and compelling case and the intelligence, preparation, and interest of these students, resulted in the unusually high level of involvement Rich’s comment points to.  The two hours flew by, all the key points were made and it was great fun.  As in nearly every interaction with graduate students in this age group, I came away having learned things I did not know and impressed with the generation who’ll take over for us when ours is gone.

Oh, one last thing.  Theranos and Elizabeth Holmes are about to get hot. Remember, you read about it here first.  An eight-episode series from Hulu called “The Dropout,” will go live March 3. There will also be a “Bad Blood” film based on John Carreyrou’s book directed by Adam McKay and starring Jennifer Lawrence scheduled to show up on AppleTV.   And last, if you have access to Apple Podcasts, you can follow “Bad Blood: The Final Chapter”, where John Carreyrou and Emily Saul discuss the testimony of witnesses in the trial and everything said by the lawyers and judge.