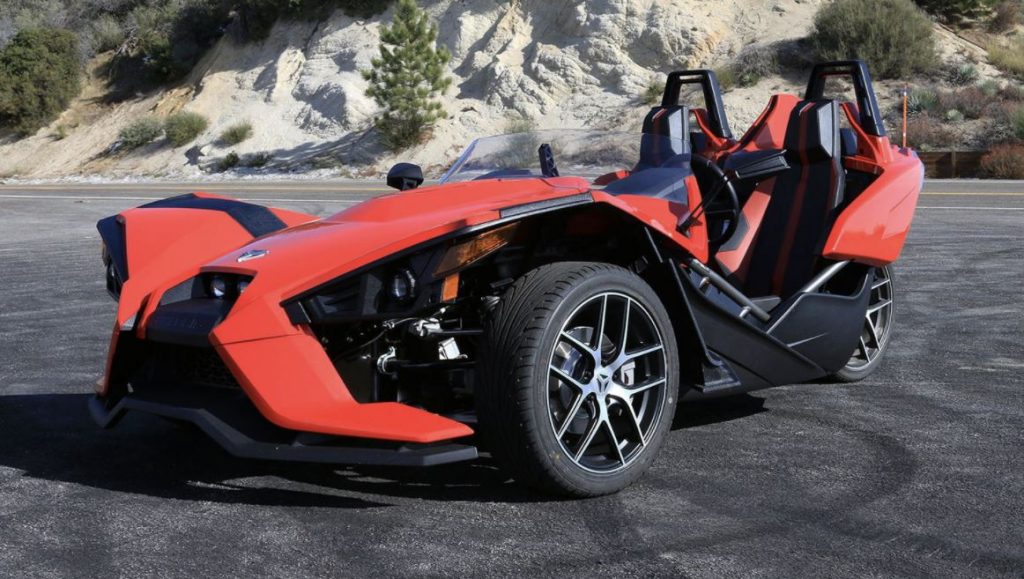 Not everyone knows I own a Polaris Slingshot.  Fewer still have any idea how or why, but I’m about to tell you.  But before I start, I need to make a point.  No, it is not a motorcycle.  While it may be called a motorcycle from a legal standpoint, it does not handle like a motorcycle, nor does one straddle it like a motorcycle. But as for vehicles, it provides more fun for the money that just about any other auto or motorcycle purchase I’ve ever made. 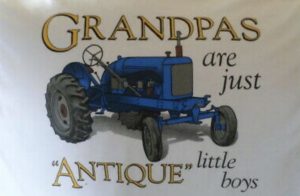 Polaris makes toys.  A lot of these toys appeal to boys from the age’ of 18 to 80.  I just saw a cute T-shirt broadcasting “Grandpas are just ‘Antique’” little boys.” Polaris has a history of knowing what guys want even before they do and gives its designers a lot of rope to create vehicles which tick the imagination of toy-loving outdoor enthusiasts.  Of course, many women love motorized outdoor toys, too, but out on the road or the trail, there seem to be more men and boys on these road-toys than women and girls.

My Polaris Slingshot is somewhere between an Ariel Atom sports car and a Ducati GP motorcycle.  It’s got three wheels and a 173-HP front-mounted engine.  The single rear wheel connects to the transmission with a belt. The ultra-wide stance front wheels and ground clearance put you just inches above the pavement.  It is an absolute hoot to drive, exhibiting near super-car agility while looking like it came off the set of a Batman movie. It cost me about $25K new but delivers the driving exhilaration of vehicles costing much more. There are tradeoffs: while breathtakingly gorgeous from the front, not so from the back. Someone said from the back it looks like a ski chairlift with a tire attached, which I admit, is a pretty good description. With a 105-inch wheelbase and 70-inch track width in front, this thing is wide. The twenty-mile stretch of twisty roads on Hwy 89 up from Peeples Valley to Prescott, AZ, found me more than once dropping the front outside tire off the tarmac.  Weighing just less than 1,700 lbs., that’s only 10 lbs. for each horsepower to pull, making the Slingshot accelerate like a rocket. I’m often asked about the stability of 3-wheel versus 4-wheel vehicles and enjoy pointing out the inherent stability of 3-wheel platforms.  If you’ve spent any time at a restaurant attempting to get a 4-legged table stable using napkins and matchbooks, noticing in the process that 3-legged tables never require such ludicrous adjustments and are always wobble-free, you get it.

Some friends and readers of this blog are spirited drivers.  They like to drift. While it can be done in both motorcycles and cars, let me review how it works in cars.  I grew up in the Midwest where winter snow and icy roads required me to learn a driving technique called drifting. This “requirement” often became just plain fun for many.  Simply put, in a rear-wheel drive car, drifting is when you intentionally over-steer the car while spinning the rear tires.  You point the front wheels in one direction and stomp on the accelerator to cause the rear wheels to lose traction, resulting in the rear slip angle exceeding the front slip angle to such an extent the front wheels point in the opposite direction of the turn. In the same way poor traction due to icy or gravel roads make this easier, having just one wheel at the rear makes it easy to do in a Slingshot.  This technique is a great deal of fun for the hooligan tendencies of certain drivers. Not that I would know any of this them personally. 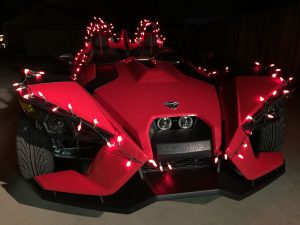 In December a few years back, I wired a 12V-to-110V inverter into the Slingshot, making it possible to power Xmas lights I’d strung all over the car.  Riding around town in this “one horse open sleigh” all festooned with lights, blaring Xmas carols over the speakers and dressed in Santa hats, was wonderful fun.   Just like Santa’s sleigh, you step over the frame to get into the car (there are no doors).  You sit on race-like waterproof seats, and settle yourself into a futuristic open-air space frame surrounded by polymer body panels.  The exceptionally close proximity to the pavement amplifies the sensation of speed.  Sliding over pavement with your backside less than a foot off the ground, you get a whole new perspective on velocity and the true meaning of ground clearance. In my NSX or the McLaren, it is shockingly easy to accelerate up a highway on-ramp and inadvertently find myself at triple digit speeds.  Not so with the Slingshot. Here, 45 mph feels like 90 mph and even at modest speeds I find myself grinning ear to ear while passengers raise their arms in the air as if on an amusement park thrill ride.

My Slingshot is “Red Pearl” and came with the optional larger 18-inch wheels in front and a larger rear wheel as well.  All wheels are forged aluminum. This SL model also included a sort of half-height windscreen, integrated backup camera, and a six-speaker Bluetooth-enabled audio system.

There are innate human reasons that convertibles, motorcycles and ATVs are so popular.  On a beautiful day there’s nothing better than the sun in your face and the wind in your hair as you experience firsthand an unforgettable urban or rural landscape.  But taking the Slingshot out on a dark winter’s night around Phoenix while glowing with Xmas lights is one of the most fun things I’ve ever done. 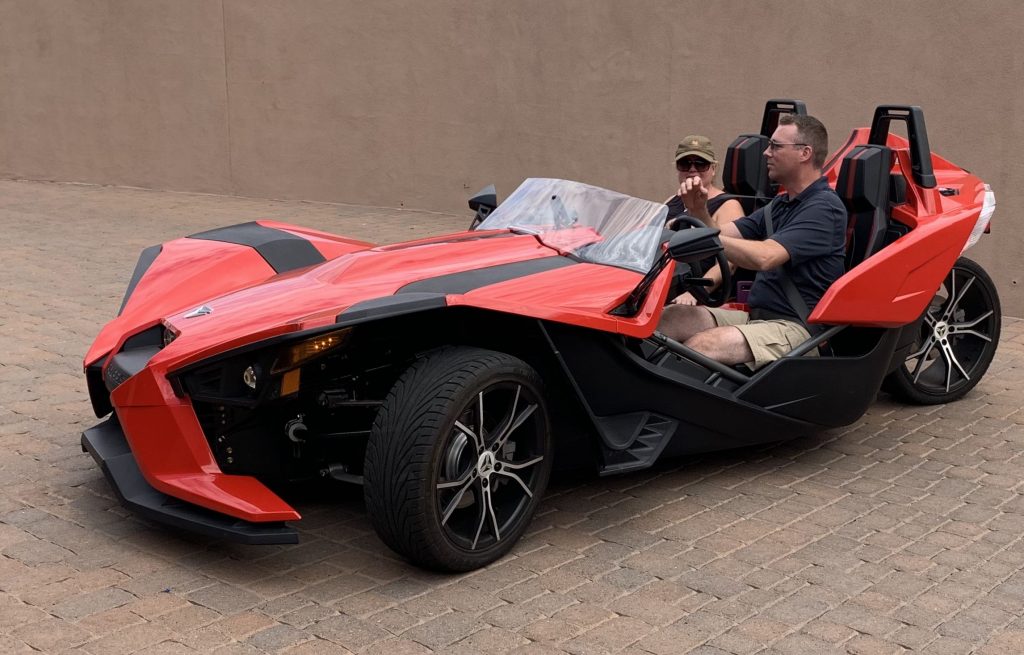 My son-in-law Jeff and daughter Christie preparing to take the Slingshot out for a ride in Phoenix.