Copper Canyon: There was more to the story 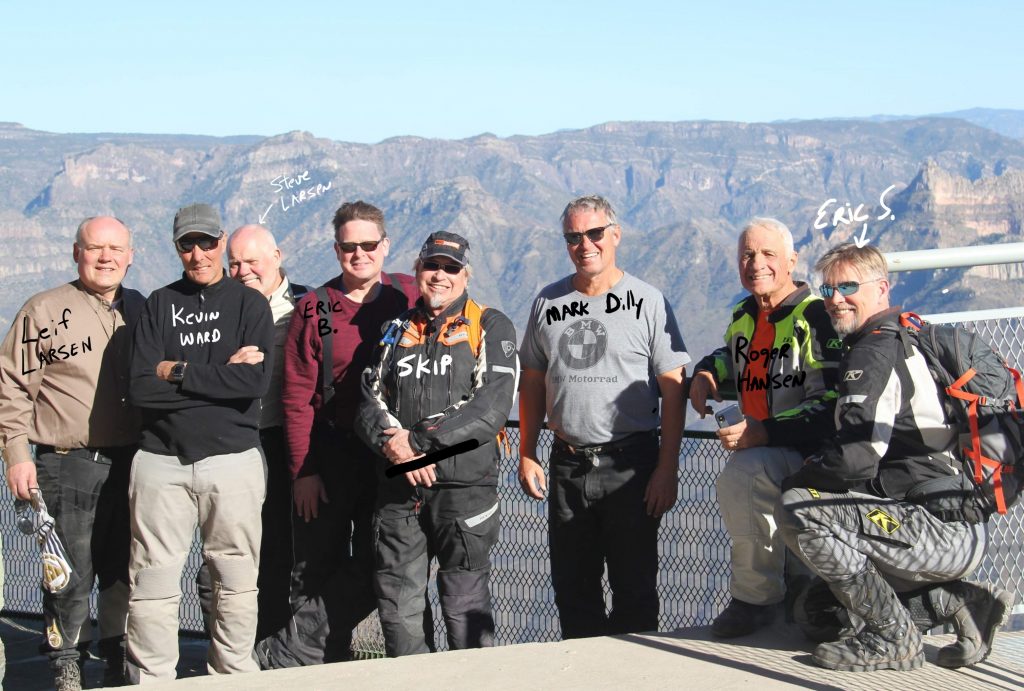 On March 29, you got a newsletter about my motorcycle trip to Mexico’s Copper Canyon. If you need a reminder, it is here.  While helpful to know some of the details of the trip, it’s not a requirement for appreciating the story in this newsletter, about something incredible and truly wonderful which happened on the last night of the trip, at a small dining room in Nuevo Casa Grande, Mexico, about 3 hours southeast Douglas, AZ where we would end our trip.

Here is a quick background:  The allure of Mexico’s Copper Canyon region to motorcycle riders has had it on my radar for over twenty years.  A ride there was near the top of my mental bucket list.  Thinking I might be closer to the bucket than at other points in my life, in March of 2018 I persuaded a group of my closest riding friends to join me on a seven-day ride from Douglas, AZ down to the Copper Canyon. Skip Mascorro and his MotoDiscovery team put together the itinerary and managed everything. All we did was show up and ride.

First, you need to understand the players.  Joining from around the USA were: Roger Hansen from Florida, Mark Dilly from Phoenix, Eric Schmid from Salt Lake City, Kevin Ward from Florida, a friend of Eric Schmid’s from Chicago – Eric Baurele, and my brother Leif Larsen from Minnesota.  Roger is an experienced rider, a veteran of several of Helge Pederson’s global rides, including the Silk Road tour. Roger and I had met in 2006 on an American Flyers Motorcycle Club ride in Washington State. Roger was riding a Harley then and found it was unable to keep up with the group, which was mostly on sport-touring bikes. I believe I was testing Yamaha’s new FJR 1300 for one of my magazines.  Back on that 2006 ride, Roger and I spent dinners discussing the riding he hoped to do in the future. Once I knew his plans, I recommended he get a BMW 1200 GS. It was less than a month after the Washington trip when he was riding a new BMW.

Kevin Ward is a member of the American Flyers Motorcycle Club. Although in a near-perpetual state of probation with this group, Kevin is a skilled rider, displaying one trait I greatly admire in a motorcyclist – a constant desire to improve his skills.  Kevin understands that if you’re not always practicing and mastering new skills and techniques, you’ll regress and your abilities will atrophy. We have an affinity for the same instructors and riding schools.  We’ve become close friends.

Kevin had introduced me to his friend Eric Schmid a year earlier, and we’d ridden together off-road in Moab, UT, staying in his luxury trailer/toy hauler.  Eric is a superb rider and signed up instantly. Unlike Kevin, Roger and I, Eric was on the younger side of fifty (then for sure, I don’t know about now). For me and most of my riding friends, our transition to a more cautious approach to off-road riding had occurred in our early sixties. For the self-aware in the group, this assessment of our bodies’ speed to heal combined with our inability to turn as fast, wheelie as far or slide the rear tire as smoothly through an entire turn, had gradually dawned on us. For all the rest, it was some sort of crash, mishap, or other “oh-shit” moment, often accompanied by some sort of a physical damaging motivator.  Don’t get me wrong, we still love riding challenging terrain, we’re just learning to do it differently.  Schmid invited his pal from Chicago, Eric Baurele.

Some years ago, Mark Dilly had made the move to Arizona from Chicago.  A key reason for his choosing Arizona and the Southwest was his love of riding. The abundance of great motorcycle roads and the long riding season. When calling or emailing Mark about a motorcycle ride, be it a day ride or more extended trip, he has yet to say anything other than “Oh, sounds like fun. Count me in.”

Talking with my brother, Leif, in Minnesota, I told him about my upcoming trip.  Never wave a trip south in front of a Minnesotan in March.  He was officially sick of winter and so was added to our group.  What Leif lacks in formal motorcycle training, he’s makes up in being a quick study.  Although I had some worries, it was mostly “older brother syndrome.”

Just as I had invited people on this ride, Skip Mascorro surprised us all. He had extended an invitation to join our group to Kaz Uzunoglu, his partner for planning and executing motorcycle tours in Europe.  I’d met Kaz in 2001 on a ride in Italy with Lotus Tours but really got to know him on an American Flyers Motorcycle Club trip to Turkey in September of 2005.  AFMC member Andy Forrester had instigated the trip and Kaz had pulled it all together.  This time, Kaz flew to Texas from Turkey where he met up with Skip, then rode to Douglas, AZ with Skip and the crew.  Skip’s team included Juan Stanglmair of San Miguel de Allende, Mexico.  Juan is a walking encyclopedia of all things automotive, including racing and classic cars.  We were joined in the Canyon portion of the trip by Ivan Fernandez, a registered tour guide with vast knowledge of the Sierra Tarahumara (or Raramuri to be more correct). Ivan’s instincts and contacts make sure we didn’t end up someplace where we shouldn’t.

There are some parallels between people riding together and going through military boot camp. Jokes and constant ribbing abound. When it’s all men, few things are out-of-bounds: choice of bike, your inadequate gear, lack of preparation, your lousy physical shape, bad hair, general ugliness, and of course, ridiculously poor riding skills.  Oh, and flatulence. Very macho and all fun, with that certain edge. But something grows as the days go by. Concern for others in the group is evidenced by the speed at which everyone rushes to the aid of a fellow biker who’s gone down, and this trip, pretty much everyone went down at least once – except maybe for Eric.

While riding, your head is encased in a helmet.  You are not talking with your fellow riders.  As Rich Marin, the founder of the American Flyers Motorcycle Club, explains in Chapter 1 of his book, “The Ride Is All,” nothing is more whimsical or fickle than seeking to be alone in a group. Riding is a solitary endeavor with nothing to restrain you or anyone to annoy you. You live in your helmet with your thoughts.  It’s very much a solitary experience.

However, every breakfast, lunch stop, and dinner you are together.  At every gas stop or rest break, you are together – every single day of the trip.  You talk, you get to know each other, learn what others do, what they’re working on, care about, and the people important to them in their lives. This group became aware of Eric Schmid’s business issues, my open heart surgery and its complications, and all our various political ideas.

Overhearing Roger Hansen on a few cellphone calls, we learned he was helping his daughter and the recovery homes she’d founded to assist recovering alcohol and drug addicts.  We learned Jennifer Hansen had emerged from a drug habit that had nearly ended her life.  She was now taking on a cause and struggle that she knew all too well.  Her Serenity Houses are set up exclusively for men or for women.  All residents living in the Serenity Houses are expected to work full-time, go to school, or volunteer.  Roger agonized over how and why the State of New Jersey, rather than helping these efforts, worked to stop these homes and shut them down.  At one dinner, Roger pulled out his phone and showed a video residents had helped put together, eloquently expressing how these homes had saved their lives.

On a tour planned and operated by a tour operator, it is traditional on the last day for members of the group to gather tip money from well-mannered participants. Typically the money is pooled; those not perceived to have given enough are cajoled to give more.  One person holds the money and watches for an opportunity to present it, along with the thanks of the group.  This typically occurs on the final night dinner and when beverages and glasses are available for toasts, and that is what happened for our group.

If you know nothing of the motorcycle touring industry, know this:  One should not go into it with the idea of becoming wealthy.  Besides Skip, I’ve known several other tour operators that I admire greatly and have ridden with repeatedly over twenty-five years.  Their motivation is to make some semblance of a living while doing what they love most – showing remarkable parts of the world and its citizens to like-minded individuals who can see and appreciate this particular experience. So, tips at the end of a trip are never refused.

Mark Dilly took the leadership role and pulled all of the money together. Mark was a pretty effective fund-raiser and so, following his very nice speech thanking Skip and his crew, the pile of cash he pushed into Skip’s hands was not only decent, perhaps even slightly better than average.

Tradition then calls for the recipient of the tip to thank his crew, pledge to share a portion with them, and tell the participants that they are indeed, the absolute best group he’s ever had the pleasure of leading.

As Skip Mascorro began his speech, one he’d given countless times before, we could see him hesitating, losing his train of thought. His words and direction began to change.  Of course, he said all the nice things about his crew and how great it was to ride with us and how he’d love to do it again sometime.  But then, he took the ball cap full of tip money and pushed it in front of Roger Hansen, saying: “If it’s okay with all of you guys, I’d like to give this money to Roger Hansen’s foundation to help his daughter and her Serenity Houses.”

Roger Hansen is a tough guy, but he couldn’t keep the tears from rolling down his face. Nor could the rest of us. 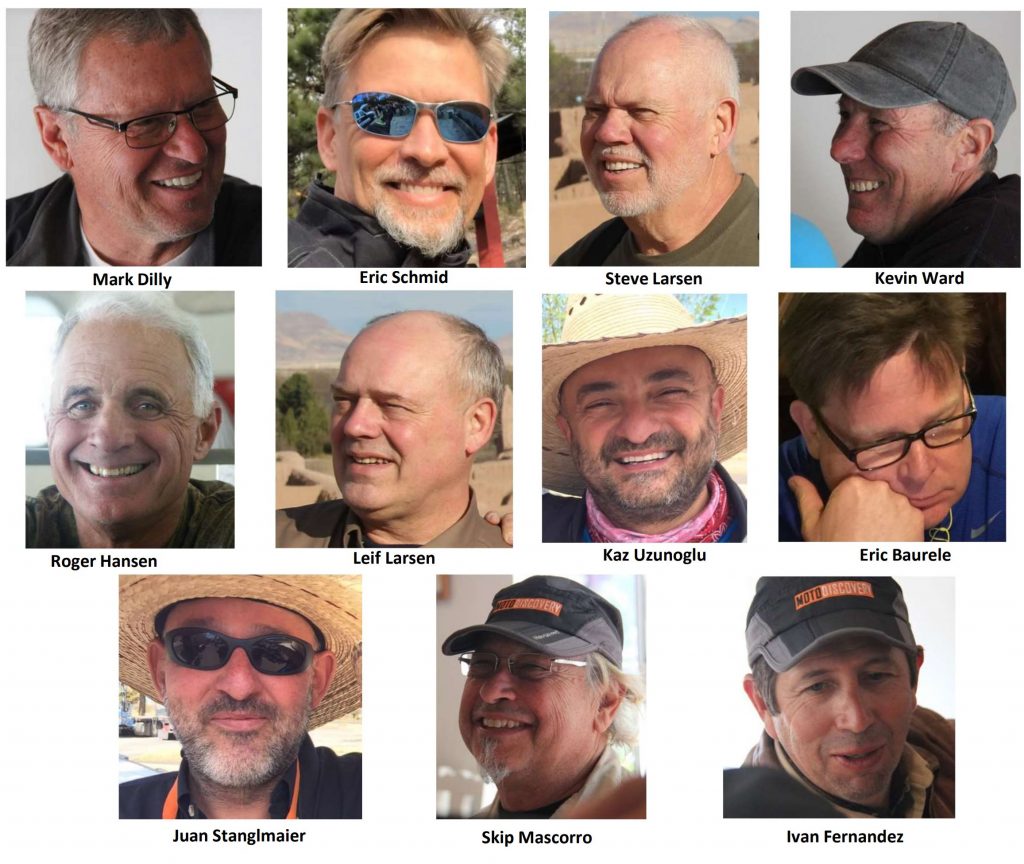 2 Responses to Copper Canyon: There was more to the story