With the completed frame back, reassembly began. This is essentially, the reverse of taking the car apart, although always more complicated than that. We often laughed at instructions in the Lotus Workshop Manual which described in great detail and across countless pages, of how to disassemble a particular area of the car to locate and repair what was wrong, only to find after all this, reassembly guidance simply read: “Reverse process to reassemble.”

First, all the suspension parts went onto the frame.  All of this is so remarkably fun and easy without the body on the car.  Brake lines were run, a large part of the electrical wiring was run.  We made the modifications to insulate the car from ever having electrical issues in the future by relocating the grounding post to high on the frame.  We set up a table with the new dash, installed all the gauges and began installing the two new wiring harnesses.  The steering rack went in and we finally put the new tires on the car and had a rolling chassis.  We installed the rear gearbox and then it was time for the body.  The body slipped into place like it had never been off the car.  We lowered the body into place and every bolt lined up perfectly with each bobbin. 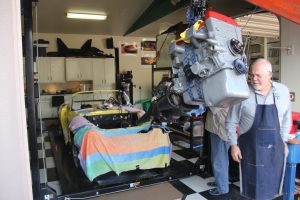 Hard to believe this big engine is going to fit into this tiny space.

A few weeks later the engine was back and we were ready to put it in.  Having a couple of people that had done this before was a big help, as once you know the trick to getting just the right angle, it slips in rather easily.  The transmission had been bolted to the engine before putting it into the car, so it was only a matter of inserting the drive train into the rear end, which also went smoother than expected.

A day or so later we had all the wiring, radiator and plumbing installed and we were ready to fire it up.  With gas, oil and coolant levels all set, battery installed, we turned the key and “voila” it sprang to life.  After about 30 minutes of tweaking, we had the air/fuel mixture right and it sounded awesome.  A few weeks of interior work were next and installation of the new seats, and we were finally ready to take it for its first drive.  We did, it performed wonderfully.  We didn’t push it, as we were running special break-in engine oil recommended by Brian Duffee for the first couple of hundred miles, but it was a thrilling end to a nearly 30 month process. 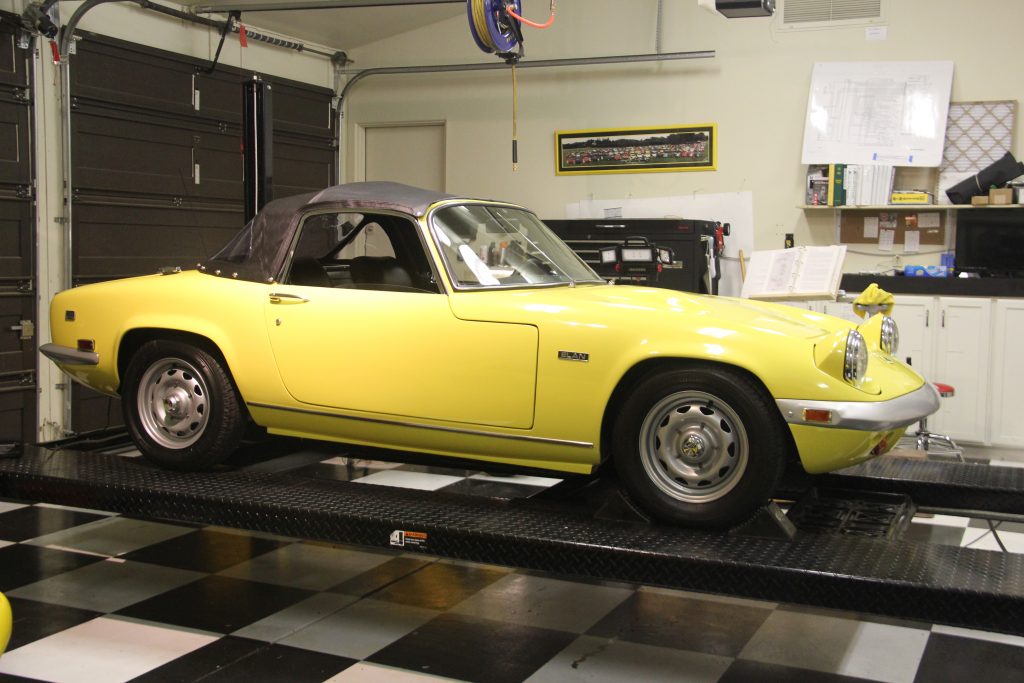 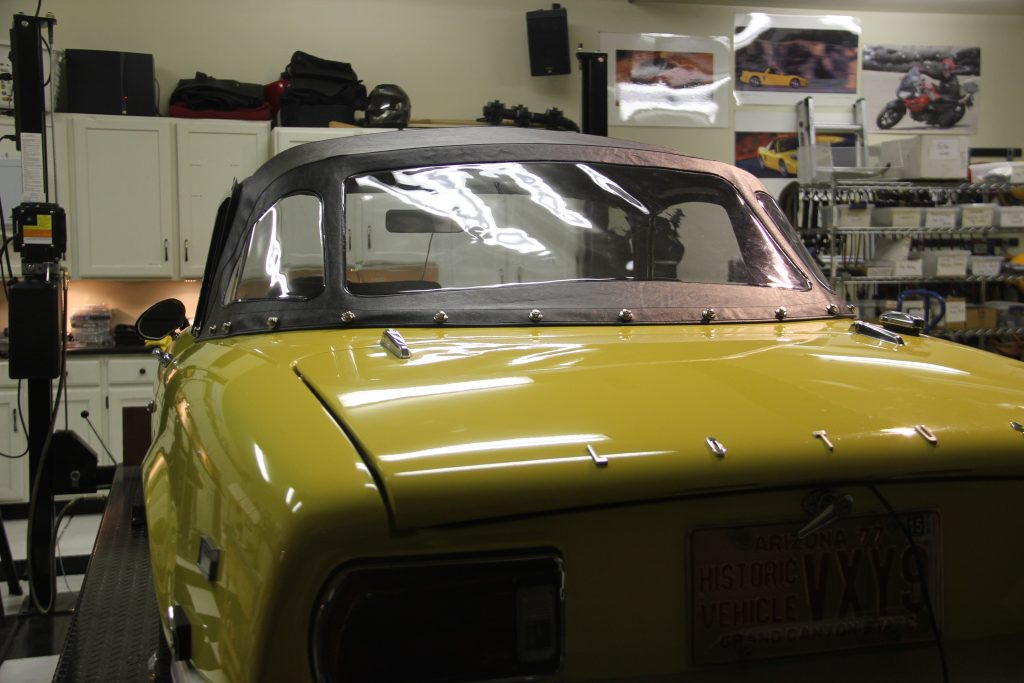 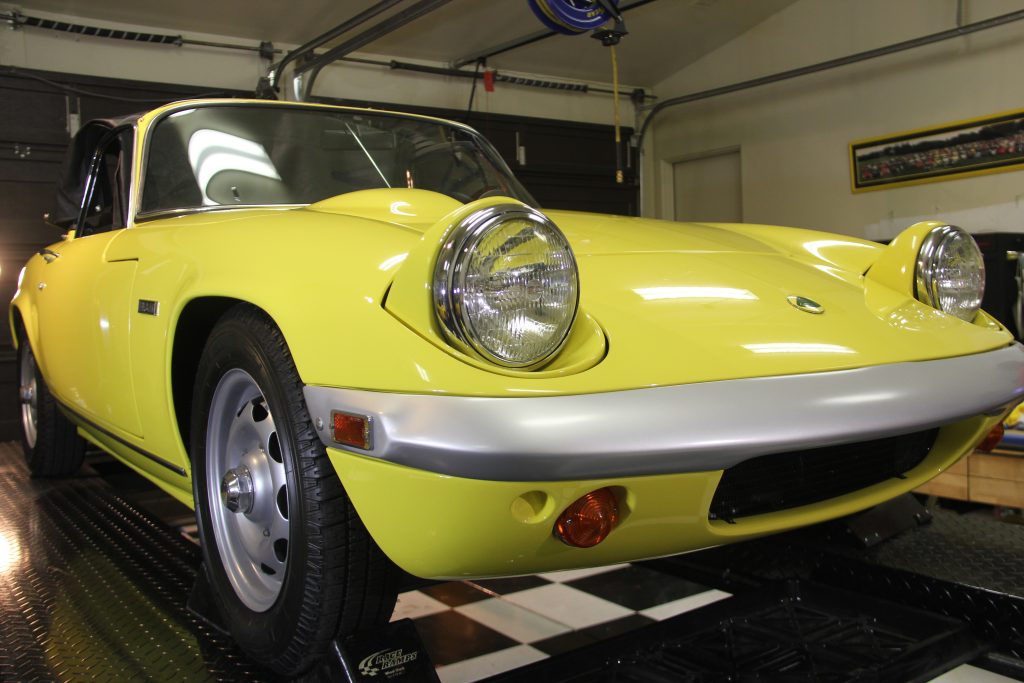 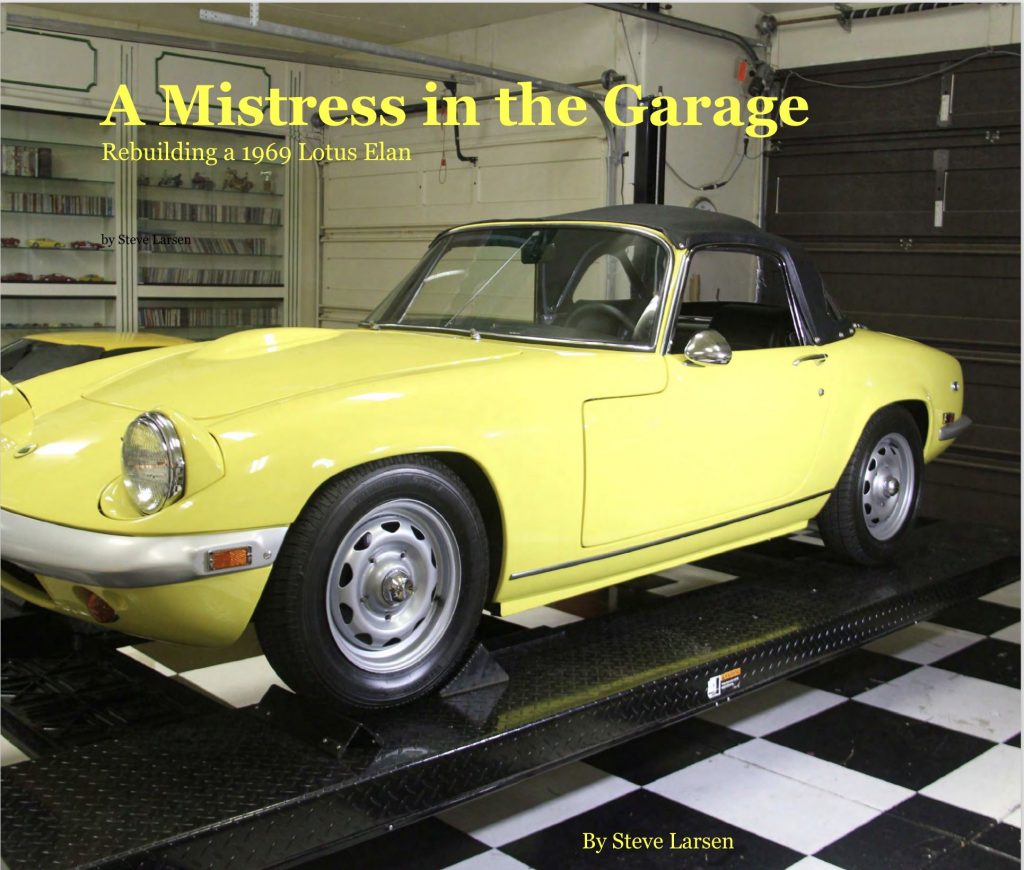 With the rebuild finished, a book was written to chronicle the entire 2 1/2 year process.  Titled “A Mistress in the Garage,” is full of photographs, before and after documentation, and special thanks to everyone involved in creating the best Elan ever.

After completing the project and spending about a year dialing the car in to be sure it was perfect, removing the break-in oil and filling it up with the oil it should use on a day-to-day basic, the project was over.  I began to feel like I’d reached the other end of the bookshelf with this car, and decided to offer it for sale through the Gooding Auction Company.  They’re very good people and I took the car to the 2016 January auction event in Scottsdale.  The car was up early in the day, with only a few bidders in the room and it eventually crossed the block for $55,000, less that what they expected it to bring.  I was broken-hearted.  Not so much because of the price, but that I’d actually sold the car.  When I met the winning bidder the next day to convey to him all of the extra Lotus parts and books I had for the car, it was hard for me to hide my despair.  He was a good man,.  Sensing my heartbreak, he offered to call Gooding and cancel the sale.  After some discussion, we decided to do exactly that, and I still own the car as well as owing him my everlasting gratitude. 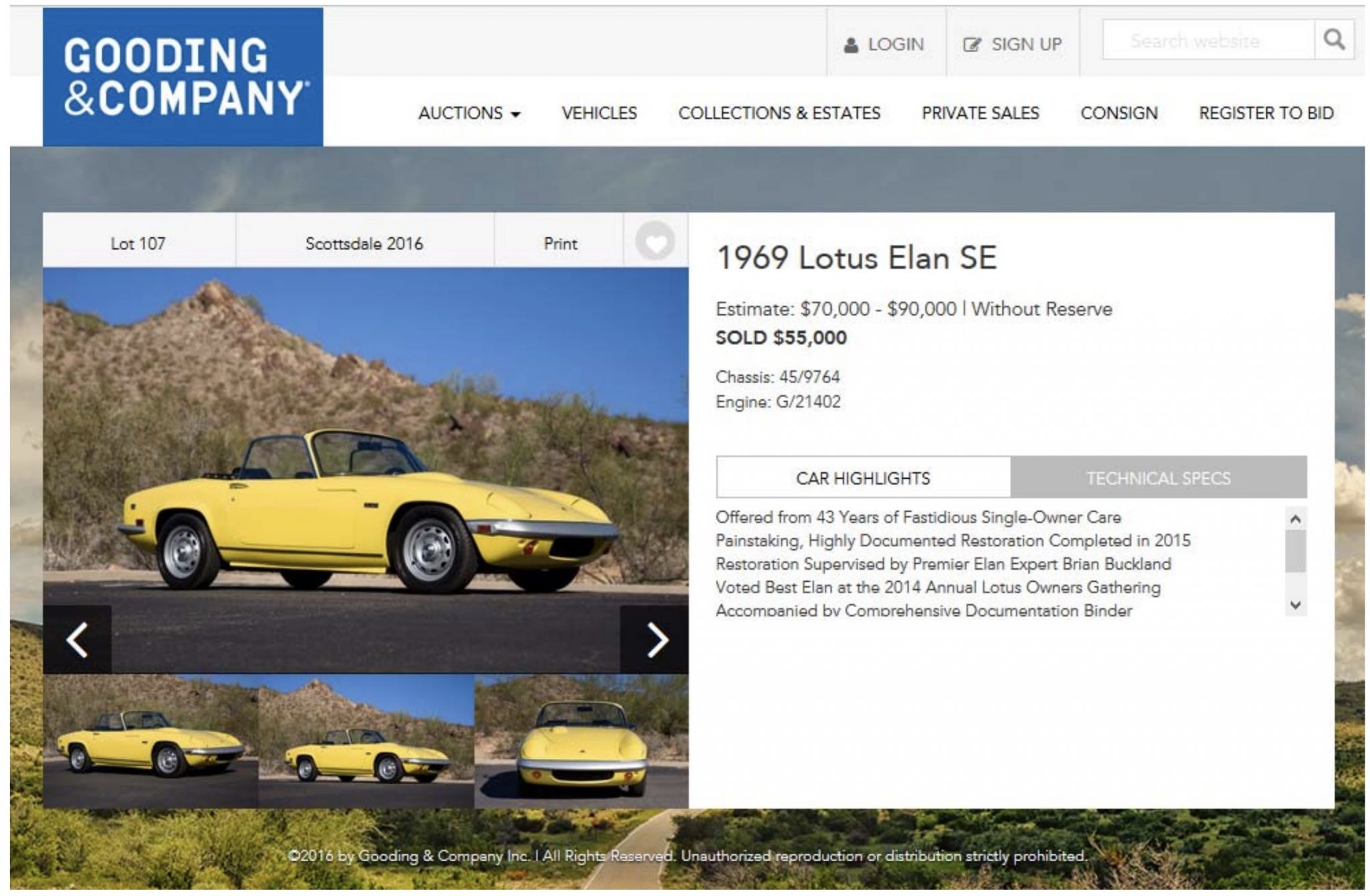 Back to Lotus Elan page