The October issue of Motorcycle Consumer News contains my article on Brazil, so I figure it’s fair to make it available to you who watch this space. You’ll find the full-text PDF linked from the Published Motorcylce Articles section. I think the article will give you a good idea what it’s like traveling down there. Following a frustrating ride behind an incredibly slow mini-van all the way down from Alice’s Restaurant to Woodside yesterday, I fantasized about the driver’s in Brazil. An excerpt:

Brazil Road Manners
Attitudes and actions of those with whom you share the road always impact how much fun youâ€™ll have on a ride. Here, Brazil was unbelievably good, at least outside of major cities. For the most part, car and truck drivers conduct themselves in a way a motorcyclist can only dream about. Imagine exiting a small town and seeing 14-15 cars ahead of you, all stacked behind a slow moving water truck as it begins its laborious, slow ascent up the side of a mountain. You know the roads are double yellow all the way to the top and with luck, three or four cars may make it around the truck in the next twenty miles, much less you getting a shot to pass. But as you approach the slow-moving tail of the snake, the end car suddenly pulls to the right, as does the car in front of it, making way for you to squeeze by on the left without crossing the double-yellow center line. As you begin to pull past, other cars do the same, and in minutes you are at the rear of the truck, who after a bit, flips on his right turning signal, indicating even though you canâ€™t see around him, it is safe to pass. This happens in Brazil. Cars routinely see you approaching in their mirrors and pull right, often driving on the shoulder, so you can pass.

This photo accompanies the article, but it’s tiny and black & white in the PDF. Here’s a better idea… 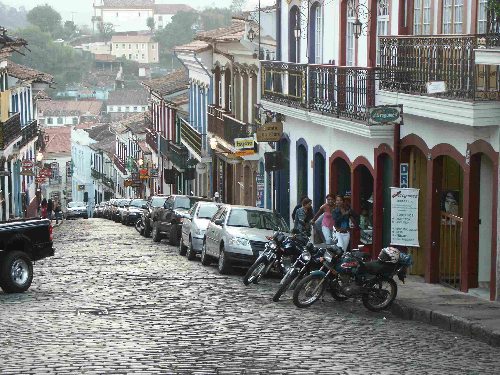 Actually, there’s a short stack of these in my previous Back from Brazil post.