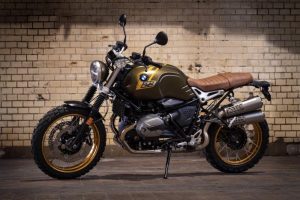 During my recent visit to California, my friend Rich and I took a short motorcycle ride to explore some of the wonderful twisty roads north of his home in Escondido.  I rode his new BMW R Nine T the first half of the ride and his big 2019 BMW 1250 GS-A during the return. After years of writing about motorcycles for magazines like RIDER, Motorcycle Consumer News and others, a part of my brain immediately begins logging impressions every time I throw a leg over a new bike.  The designers of the Nine T had a very clear idea of the riding experience they wished to create and the way this bike feels was instantly cemented when I switched to the big GS-A, especially because the GS-A is so much like my daily ride, the non-“A” version of the big bike.

The Nine T is gorgeous to look at, oozing style from every angle. Few bikes possess this degree of timelessness right out of the box.  One look and you know it’s going to be as attractive ten years from now as it is today. A classic is forever.  Of course, it helps if the horizontally-positioned boxer cylinders are something you like or, at least, are accustomed to. You may think these wide appendages will keep you from dragging a knee, given the degree to which they stick out to the sides, but that thought disappears when you are riding.

Within the first couple of miles on the Nine T, any prejudices I may have had regarding BMW being able to make affordable, naked sportbikes evaporated.  The bike immediately brought to mind the Ducati Monster, legendary for its sublime ride and extraordinary handling. I rode my first Monster, a tricked-out, yellow 900 with race suspension and custom exhaust, on an American Flyers Motorcycle Club (AFMC) trip in Italy in 2001.  Returning to California, it wasn’t long before a bright, new, red Ducati Monster sat in my driveway.  It became one of my favorite bikes of all time, ideally suited to the roads between Sausalito and the northern California coast where I was living then.  I spent hundreds of glorious hours all over Mt. Tamalpais, Hwy 1 to Muir Beach, and through the tunnel and back along Frank Valley Road. Never have a bike and a set of roads been so well-matched.  The Nine T has the same quick corner turn-in, light and flick-able as the Ducati, although with a bit smoother gearbox.  It’s not an all-day touring bike, but for 2-3 hour jaunts it is fine, especially at speeds high enough to create a cushion of air on your chest to ease pressure on your arms and wrists.  While weighing a bit more than the Monster, it feels just as light. The brakes have a snappy bite which adds to the intuitive handling, a signature characteristic of many BMW models. 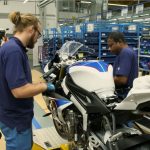 For years no one believed BMW could make sportbikes. Then, in 2009, they introduced the S1000RR superbike and put that misperception to rest once and for all.  WELT has a film showing how this bike is made in a 50 minute, beautifully recorded, and well-narrated documentary.  Highly recommended:    https://www.youtube.com/watch?v=yROGg3_vHBc

The Nine T cuts to the basic elements of riding and hits many of the buttons that make riders fall in love with motorcycles.  There is no traction control; it lacks electro-suspension features; there’s no fancy GPS or dash display; forget about cruise control and, in fact, anything that takes your focus away from just riding.  At just under 100 HP (95.8), it moves off the line quickly and eagerly pulls away as you straighten it up out of a corner. It’s like baby bear’s porridge, not too hot, not too cold, just right.

Smooth ribbons of two-lane twisty roads are where the Nine T shines. All-day on a super slab, not so much.  The lack of wind protection, cruise control, and narrow seat will get old fast, especially if you are a bit old yourself.   Thanks for letting me take it for a spin, Rich.  It was absolutely sublime.

A better look at the yellow Ducati Monster I rode in Italy.