Good friend and fellow-rider Arthur Einstein (see his comment on “Buy the Right Bike” post below) emailed to let me know he’d let his beloved Triumph go and had purchased the BMW 1200RT. Here is picture of the happy couple. 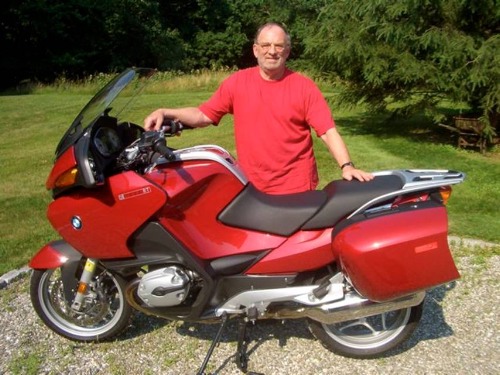 You know how they say the second happiest day of your life is when you buy a new boat – the happiest being the day you sell it? I noticed and identified with Arthur’s feelings in letting the Triumph go. I think that’s true for most riders when they sell a bike. Unlike boat owners, we’re always sad to see a beloved bike leave our garage. Here are some excerpts from his letter:

1. Shopping. Nobody wants to sell you a bike. Nobody took my name or contact info. Nobody tried to help me make a decision. Nobody convinced me they knew the product. MO and MCN reviews online were the best help I got.

2. Dealer I bought this from (used with 747 miles – a 2005) didn’t clean the bike. Riding I found it missing badly. Made it back to the dealership before it closed. A tech determined it had a bad plug. The kicker of course is that nobody checked out the bike before it was delivered.

4. I wrote a pretty thorough description and on reflection think that helped a great deal. It established me as a serious seller and knowledgable rider, gave a good rationale for selling the bike, and generally gave bidders some comfort. It got lots more bids than a similar bike that was up at the same time.

I will miss the Triumph. It’s lighter and handier than the BMW. It’s sort of like the difference between a Miata and a Lexus 430. One’s light and handy. The other’s a Luxo cruiser. The real point is that I’m having to learn to ride differently. At a stoplight on an incline I can hold the Triumph with my legs, two feet on the ground. In the same situation, the BMW makes me keep my left foot on the ground and my right on the brake. I just have to learn to do things differently.

On the upside the BMW pulls in every gear – goes like stink – eats up twisties (though still not at the rate that the Triumph permitted – but that’s me getting familiar with it ). I’m able to raise the windshield a smidgen and not need to use ear plugs – it reduces the buffeting and wind noise that dramatically. The trip computer shows miles-to-empty, checks oil level, both of which are helpful. The ride control is nice. The ergonomics are good for me and it’s very comfy.”

2 Responses to Arthur and Beulah