Annette Birkman’s book is out 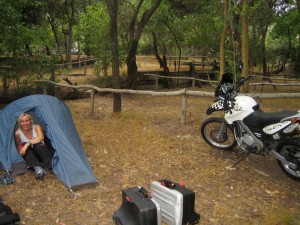 On a warm night early in 2009, Annette Birkmann stood in front of eighty or so riders at the BMW/Triumph dealership on Old Middlefield Way in Mountain View, California. Birkmann, a blond, Danish woman of average height and weight, with piercing blue eyes and a ready smile, had just arrived after spending a year riding from Tierra del Fuego, the southern tip of South America to San Francisco, alone, on her 2001 BMW F650 Dakar. I was there and observed the affect she had on the assembled riders, who viewed her with intense interest and a palpable awe. Interviewing her a few days later, I shared her adventure with readers of Motorcycle Consumer News in an article later that year.  BirkmannMCN4-09

Birkmann has now told her story in a new book, “The Road to Getting Yourself Out of the Way: A Journey to Effortless Living.” (Amazon.com, $17.99 for paperback, $9.99 for the Kindle), the book chronicles her learning experiences during her year-long trek across South America. Read Birkmann book review (PDF) here.

Her tale is far less a primer on how (or how not) to prepare for a year-long, one-person motorcycle trip through South America than it is one person’s journey of coming to terms with life’s elemental truths, her struggles with wrong-headed thinking and the roadblocks to a state of mind in which she feels the simple joy of just being alive. Her hard-won breakthroughs in understanding are described in terms any long-term rider will understand the feeling of riding without fear, completely present in the Now, when every movement of the bike becomes effortless and time seems to standstill. Highly recommended.