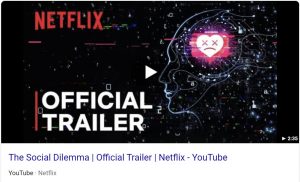 Most readers know my newsletter is not a platform for political, religious or social commentary. This one may be a small exception. Although not political or religious, there is a bit of social commentary here. The documentary film, The Social Dilemma, is eye-opening, explaining how Facebook, Google, Instagram and other social media platforms work. I encourage you to watch it, become a bit more informed and make your own conclusions. My thoughts are below.

Without pointing fingers or demonizing anyone, The Social Dilemma, explains how the algorithms underlying social media platforms like Instagram and Facebook function, how they evolved and some of the impacts they have. The tech world has been figuring out and fine-tuning this software for quite a while.

Rob Kost, one of my best friends and Prodigy colleagues, reacted to my initial recommendation to watch this film, by saying: “All the more interesting coming from the guy who ran one of the first social networks.” Rob recalls correctly. In the early 1990’s I ran the communication products for Prodigy Services Company (owned by IBM) which covered Bulletin Boards, Chat and E-mail – one of the first large commercial social networks, along with competitors like AOL, CompuServe and GEnie.  We all learned a great many things creating and operating these forums, including the importance of not allowing anonymity — requiring people to own their words. Prodigy also took too long to discover the futility of attempting to censor what people are allowed to say.  I was involved in lobbying Congress regarding the Telecommunications Act, which passed in 1996. It codified the distinction that online services were like telephone companies and could not be held responsible for what someone posted on one of their bulletin boards or chat systems, in the same way that the phone company could not be found legally responsible for bank robbers planning a crime using the telephone.  The incident which prompted the historic court case, Stratton Oakmont, Inc. v. Prodigy Services Company happened on my watch.  A user on our Money Talk bulletin board created a post essentially calling a Long Island securities firm “a bunch of crooks.” This was one of the things which led to Section 230 of the 1996 Communications Decency Act. Stratton Oakmont’s antics were the story behind the 2013 movie starring Leonardo DiCaprio called The Wolf of Wall Street.   But I digress.  Through all of this we learned, and solved a lot of problems, but for the most part, we never anticipated what is happening today.

Later on I leveraged my hard-won online and Internet experience to become a founder and entrepreneur of early stage Internet and tech companies. One of those companies, Net Perceptions, productized a set of collaborative filtering algorithms into something we called a “Personalization Engine” in the late 1990’s.  The software worked so well at predicting what people would like and buy, Net Perceptions found itself going public (NETP) and reaching a rather extraordinary market value in just over five years.  I say this to acknowledge I’m not entirely innocent in all of this, but I can assure you, our goals were not evil.  We just wanted to help clients sell more stuff by making their advertising messages more relevant and directed to those most receptive. But the seeds planted with this and other sophisticated software products have resulted in something far scarier.

Our country and the world face real and significant problems. The solutions require wisdom, collaboration, fair mindedness, informed and humble people.  But social media platforms, the way they operate today, are contributing to, perhaps even causing, less of these things. We are inadvertently being manipulated by a financial model that depends on us viewing, clicking, linking, tweeting and buying into becoming something none of us wants.

The process works by de-integrating, slicing, dicing, grouping and dividing people into smaller and smaller groups, referred to as cohorts, silos, and/or bubbles. We are continually fed precise and unique bits of information that harden our prejudices, which can then easily lead us into an “us vs. them” frame of mind, causing us to doubt the motives, goodness and patriotism of our fellow citizens. These feeds reinforce our thinking that we are “right most of the time.”  It results in us having a very poor understanding of the ideas and concerns of people with whom we may disagree. Losing the feeling that “we’re all in this together” is a very bad thing.  Imagine, in contrast, if the COVID-19 threat had been handled with an attitude of “something is attacking us, we need to band together to fight, find the best and most effective weapons and strategies and then implement them together to ensure the fewest number of people are affected until we find a vaccine or cure,” instead of turning it into a political, “us vs. them” fight?

Social networks work because every click, every page we look at and for how long is recorded, tabulated, analyzed and organized into a picture or profile of us that allows us to be exploited. By exploited I mean specific advertising messages are served to us along with additional content options peaking our interest which causes us to stay longer at one page or in one area. Another impact is the way search results are tailored to take advantage of our limitations, biases, weaknesses and proclivities.  For instance, the film points out that if you enter the term “Global Warming,” into Google, the results you see are determined by where you live, your profile, and projected political ideas. Results for your search could be along the lines of “Global Warming Hoax” for one person and “Scientists Warn of Global Warming’s looming catastrophe,” to another. It just “depends.” People end up with their very own unique and individual versions of “the truth” at the loss of commonly accepted and acknowledged truths.

Lastly, and perhaps most disturbing, is how unprepared and unmatched we individuals are to deal with this level of manipulation.  These algorithms, based on our behavior, are highly addictive, and seamlessly tap into our fears, phobias, anxieties, traumas, uncertainty, emotions, intellect, perceptions, vanities and desires.  When being publicly pushed on the loss of privacy due to the Net Perceptions technology, I often countered with, “Hey, all they want to do is sell you more stuff. Are you telling me you don’t have the will to stand up to advertising that does not interest you?” Watching this movie, I realized the reality and implications have gone far beyond just showing ads.

Perhaps the most powerful impact of this film is the way it demonstrates the ease with which humans can be manipulated by bad people and those with heinous motives.  These methods are not secret, difficult to understand or hard to use.  These incredibly powerful tools, when aimed at our democratic institutions, have the greatest ability to cause us the most imaginable harm.  If you, for instance, wished to destroy the United States, our freedoms and democracy, the film lays bare precisely how easily it can be done.  Equally scary to me, as a man with two awesome granddaughters, is the potential harm it poses to teenage girls.  After watching the movie, I think I would prefer they carried around live grenades and open packs of cigarettes before allowing them more than a few unsupervised minutes a day with a smartphone.

Sure, the movie makes some claims which can be characterized as sensationalist, but maybe that is required to get attention to an important issue. Turn your smartphone off, shut down your iPad, watch the movie.  Let me know what you think.

P.S.  In October of 1997 I gave a speech at the Camden Conference in Maine.  It outlines in more detail, my history and perspective on online communities.  The speech was titled, “Electronically, We’re All Neighbors: A Perspective on Community.” It can be a bit cringe worthy in places, but that is what happens when looking at things from twenty years or more ago.  If you’re family, you’ll enjoy it.

One Response to Movie Analysis: The Social Dilemma