A Most Unusual Ride 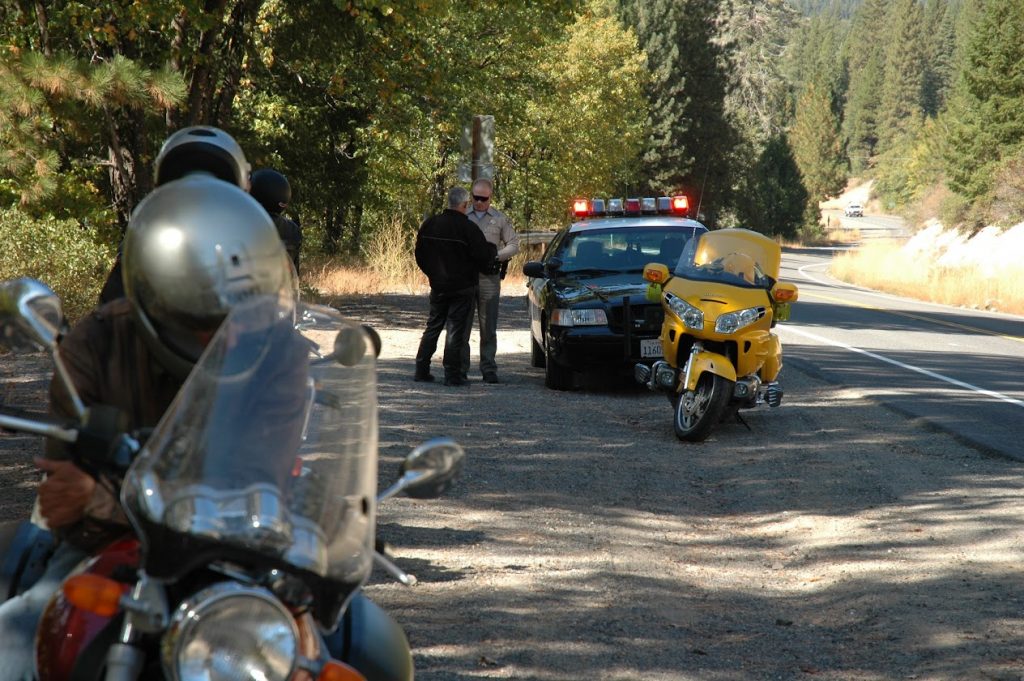 After participating in an international riding competition as a member of the Arizona Precision Motorcycle Drill Team and taking second out of 15 teams, our group of riders split up to ride back to Phoenix from Nashville, TN.  The competition had been held at the Gaylord Opryland Hotel. Teams from the USA and Canada had competed. Our team, like the others, had practiced 4-5 nights a week for nearly a year, honing precision riding techniques, hoping to impress the judges and the crowd. Our ride plan to get home was not nearly as detailed. With a narrow focus on the competition and winning, we’d neglected to plan much for our ride home. The group, with respective wives and support personnel, split up, each to make a way home matching individual requirements. Four of us decided to have an adventure.

Our first stop was the Tail of the Dragon, 200 miles east of Nashville. While I’d ridden this 11-mile section when it was known as “Deal’s Gap,” the others had not and were anxious to give it a try.  These riders, coming off a year of nearly daily riding practices, were mostly disappointed, both in the number of slow bikes on the road and its short duration.  “Hey, this doesn’t hold a candle to the ‘Devil’s Highway (Hwy 191, old route 666)’ in AZ with 650 corners, 120 miles, and 5,000 feet of elevation change. What’s the big deal?” With rumors of an incoming hurricane, we followed fifty or so miles of the Great Smokey Mountain Parkway, getting drenched in the oncoming storm, before finding a hotel in Knoxville. As the heart of the storm was reported to be moving at roughly twenty-five miles per hour, we planned to outrun it the next day, momentarily forgetting that hurricanes don’t stop to sleep at night. We wisely spent a day in Nashville waiting for the storm to pass and mulling over our original plan of riding north to Cleveland (Rock & Roll Hall of Fame), then through Michigan into Canada, then to Winnipeg, then south to Arizona, perhaps along the Mississippi River. That plan was more of a loose idea and was eventually discarded.

One of our group had an alternative idea: “Since the storm is heading North, why don’t we go south? We could go straight south until we hit Florida and the Gulf of Mexico. Then we just turn right (west) toward Arizona and take every road going to the left we come across. We won’t even need a map! We’ll just bounce along the Gulf, eating great seafood and staying in cheap hotels.”  No one had a better plan, so that is what we did.

Somewhere between Panama City and Miramar Beach, we found Route 98. What a great road! This idea of bouncing along the gulf coast was paying off. Route 98 eventually led us across a long bridge into Pensacola, FL. 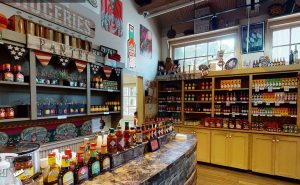 One of the most memorable results of our “take any road to the left” gambit was entering Louisiana and taking a left onto route 329. This highway dead-ended at Avery Island and the home of the Tabasco Factory.  Besides a neat little museum, a garden, and a factory, they had a Country Store with every variation and size of Tabasco hot sauce you can imagine. We discovered that a significant number of Tabasco bottles fit on a motorcycle if the bottles are very small. 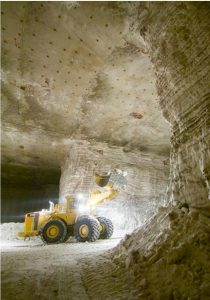 Avery Island produces over 2 million tons of salt each year from 3 large salt mines operated by Cargill. McIlhenny Company owns the Tabasco brand and the mines. Most of the salt is used to de-ice roads and, of course, to make hot sauce. We were not able to visit the mine but saw some amazing photos.

As we rode these largely under-utilized two-lane roads, an occasional wild hair would emerge, and I found myself hurtling along these flat roads at substantial speeds. I was feeling somewhat immune from expensive tickets, due to the off-duty motor officer riding with our team, who I assumed would come to my rescue should I be pulled over.  I was riding with a “get-out-of-jail-free” card, I thought.  In my imagination I saw myself being pulled over, standing by my motorcycle as my riding partners approached. My police buddy would see the situation, ride up and engage the officers who, upon learning of their fraternity, would let me off with a warning. How can you not love that?

Then, sitting outside a small hotel that night, my off-duty team member gave me the sobering news. He told me: “I would NEVER ride at the speeds you are riding through another officer’s territory. Disrespecting a fellow officer is not cool!  And just so you know, if I saw you pulled over, I would be hard-pressed to stop and help.  I might, but trust me, I would be embarrassed at having to admit rding with such a disrespectful jerk.  And so we’re clear, if you keep riding like this, you’re on your own.”    That talk changed my attitude on speeding although it was several years before my interactions with speed cops and cameras began receding. 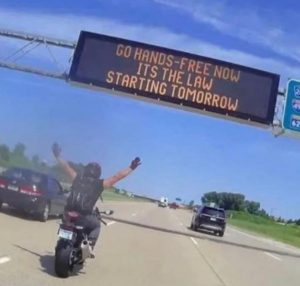 While on this topic, let’s address several riding compatriots who’ve told me I ride too fast, and point to a raft of tickets and traffic stops as evidence.  After spending extensive time training and riding on closed courses, whether racetracks or parking lots, I know how much safer it is to push the limits in those environments – and not on public roads.  I tested my limits there, occasionally crashing, but always with minor damage to myself and my ride. Closed-course racing and training eliminate variables of other vehicles and inattentive drivers. On a racetrack, everyone is going in the same direction and the track has been cleared of debris, sand, and rocks. There are no unexpected obstacles. Trained first responders are frequently nearby and sometimes, even an ambulance is on sites. 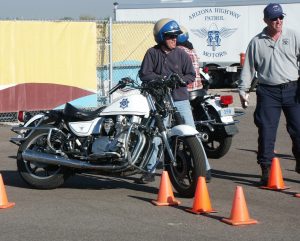 A year after my Nashville experience, I completed both the Phoenix Police Motor Officer program and the course DPS (Department of Public Safety) requires its highway patrol motor officers to take. You can read about those experiences here (Phoenix Police) and here (Highway Patrol).  I not only improved my riding skills but my attitude.  Several “ride-along” opportunities allowed me see traffic stops from an officer’s perspective. A smarter individual with better judgment would have used this experience and skill to never get pulled over again. While getting a good bit of the way there, I still occasionally got stopped, but nearly always talked my way out of a ticket.  Carrying a motor officer challenge coin and having low-key but visible police decals on my bike did not hurt. I also learned unless you’re doing something stupid, most officers are open to finding a way to let you off with a warning as long as you don’t lie, present the right attitude, and have a legitimate reason for why you were violating the law. Sometimes, even ignorance can be an excuse.

As we entered Texas, our group decided to stick with the “Go West – taking every left” plan. It continued to work, but it got complicated. Near Port Arthur, TX, swamps pushed us away from the water and we ended up on Route 73 until we got to Winnie, and then took Route 124 south through Stowell and back down to the water. Finally making it back to the familiar Highway 87.  We followed this along the coast, expecting to reach Galveston.  Instead, the road stopped.  It ended in Port Bolivar and we were forced to board a ferry, which turned out to be great. They let us park the bikes way in the front and it was free!

Somewhere around Corpus Christi, we realized sticking with the “follow the Gulf” plan was going to land us in Mexico. Long out of clean underwear and growing weary of each other, we decided to get on the super slab and head for Phoenix. We picked up Interstate 10 in San Antonio and began the 1,000-mile ride to Phoenix, which took us 2 long days.  We choose to enter from from the north, avoiding Tucson and going through Globe, then Superior. It felt great to get home. We’d been gone for 3 weeks, had ridden 5,000 miles, placed second in a motorcycle completion, and endured a hurricane, mosquitos, fog, blazing heat, sp-so food and some of the worst hotels ever – but no cops.  Life does not get better than this.

I was interviewed for a cover story by Wing World Magazine, responding to questions about the two articles mentioned above about training with motor officers.  You can find that story and killer cover photo of me on my yellow Gold Wing here.

One Response to A Most Unusual Ride